STREAKS, STATS AND NOTES — QB Tua Tagovailoa seeks to go 4-0 as the Dolphins’ starter, joining Ben Roethlisberger as the only quarterbacks in the last 40 years to win their first four starts as a rookie. Roethlisberger won his first 13 starts in 2004. … The Dolphins’ record is their best through nine games since 2001. Their five-game winning streak is their longest since 2016. … Miami ranks fifth in point differential at plus-69. Through nine games last year they were at minus-149. … The Dolphins rank second in takeaways per game at 1.7. They have a takeaway in 16 consecutive games, the longest streak in the league. … Xavien Howard is second in the NFL with five interceptions. Emmanuel Ogbah is tied for fourth with eight sacks, including at least one in each of the last six games. … The Dolphins have been outgained by 494 yards. … Miami ranks last with an average of 3.6 yards per rush. … The Dolphins have scored at least 21 points in eight consecutive games this season, the team’s longest such streak since 2001-02. … Last week Miami allowed no sacks for first time in two years. … Jakeem Grant leads the NFL with 294 yards on punt returns, and is second with a 14.7 average. … Jason Sanders made 22 consecutive field goals before missing last week. … Miami’s next three opponents are a combined 5-21-1. … The Broncos are 3-6 for the fourth straight season and they lead the league with 21 giveaways, including a league-high 16 interceptions. They turned over the ball five times at Las Vegas last week. … QB Drew Lock has 10 interceptions in four games since returning from a shoulder injury. He bruised his ribs last week and if he can’t play Sunday, it’ll be backup Brett Rypien, who threw three interceptions in his only other start, a win over the Jets in Week 4. … RB Phillip Lindsay aims for his third straight home game with 75 or more scrimmage yards, but he’s coming off the worst game of his three-year career, 2 yards on four carries against the Raiders. … WR Tim Patrick aims for his third straight 100-yard game against AFC East opponents. … Rookie WR Jerry Jeudy is seeking his fourth consecutive game with at least 65 receiving yards, and rookie WR KJ Hamler is looking for his third straight game with 50 or more receiving yards. … ILB Josey Jewell has double digit tackles in three consecutive games. … S Justin Simmons had a season-high nine tackles last week and has intercepted a pass in two of last three games. … Fantasy tip: Jeudy (34) and Hamler (21) are the only rookie teammates with 20-plus catches this season. 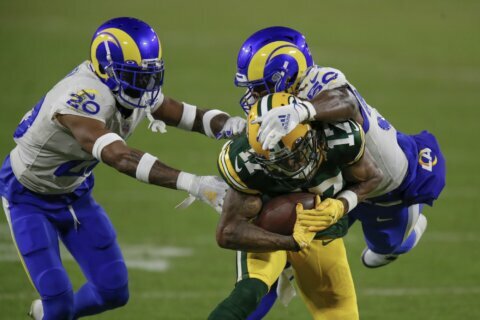