Steelers’ Smith-Schuster still ‘lit’ but with a dash of grit

PITTSBURGH (AP) — Don’t get it twisted. Life is still very much “lit” for JuJu Smith-Schuster. A quick scan of the Pittsburgh Steelers wide receiver’s hyperactive social media accounts offers all the proof required.

There’s the soon-to-be 24-year-old hawking pizza. There he is TikToking on the midfield star at the Cowboys’ AT&T Stadium. There he is rocking his own line of merchandise, including sweatshirts featuring Boujee, his Instagram-famous French bulldog.

The off-the-field brand is stronger than ever for Smith-Schuster. Just don’t think it interferes with his day job.

For all the good-natured “look-at-me-ness” Smith-Schuster embodies, underneath is a player who has deftly avoided being labeled a diva and all the baggage that comes along with it (see Brown, Antonio).

Developing a reputation as one of the NFL’s toughest players at his position helps. Sure, rookie Chase Claypool has become the field-flipper for the league’s only unbeaten team and Diontae Johnson’s pedigree and quick feet are reminiscent of early-2010s Brown.

Smith-Schuster remains first among equals for the Steelers (9-0).

While his numbers — 54 receptions for 516 yards and five touchdowns — are modest compared to his breakout 2018 when he had 111 receptions, Smith-Schuster has become Ben Roethlisberger’s security blanket. If it’s third down, the ball is probably going to the 6-foot-1, 215-pound player who doesn’t avoid contact but welcomes it.

Twice in the second half of last week’s victory over Cincinnati, Smith-Schuster caught a third-down pass short of the sticks and bulled his way for a first down. Both drives ended in touchdowns. Roethlisberger doesn’t think it’s a coincidence.

“I have 100 percent confidence that he’s going to find a way to get the first down,” Roethlisberger said. “He’s just a competitor. He is so fun to play with. I’m so proud of him. He’s not putting up gaudy numbers like he has in years past, but the things that he is doing (are) just as important for his offense and this team as in any year that he has done.”

Smith-Schuster arrived in Pittsburgh in 2017 as the league’s youngest player and quickly became a fan favorite for both his precocious play and the child-like joy he brought to everything he did, whether it was being taught how to drive by left tackle Alejandro Villanueva or pleading for someone to return his stolen bicycle.

A year later he was in the Pro Bowl, taking advantage of the attention opposing defenses paid to Brown to rack up 1,426 yards receiving. The honeymoon didn’t last. Brown pouted his way out of town and Roethlisberger spent almost all of last season on injured reserve after tearing three flexor tendons in his right elbow.

Smith-Schuster had trouble staying healthy himself, and his modest production (42 receptions) while catching passes from backups Mason Rudolph and Devlin “Duck” Hodges led to an offseason in which the Steelers did not offer him a contract extension.

Yet Smith-Schuster brushed aside the notion of sitting out 2020 even after Pittsburgh took Claypool in the second round, hinting they might be moving on from their young star.

Instead, Smith-Schuster welcomed the notion of becoming the elder statesman in a group of 20-somethings that includes Claypool, Johnson and James Washington.

When defenses placed much of their focus on him early in the season, Smith-Schuster willingly became a decoy and helped Claypool and Johnson work on their end zone celebrations.

Though he has the speed to get down the field, he has gleefully accepted working out of the slot and thriving amid a sea of linebackers and safeties, particularly in those moments when the Steelers absolutely need something to happen.

And Smith-Schuster is in the process of earning himself a significant raise next spring. Whether those checks are cashed in Pittsburgh or not remains to be seen. The Steelers have other priorities — namely, working on an extension for outside linebacker T.J. Watt — and Smith-Schuster’s play might price him out of the city that in some ways has helped raise him.

Smith-Schuster is taking nothing for granted. Three years into his career, he still hasn’t been on a team that’s won a playoff game.

For all his ubiquity on social media, he has found a way to make sure he doesn’t take away the shine of the receivers he’s taken under his still very young wing. The Steelers are planning to rely on Smith-Schuster’s maturity as the stakes get higher.

“He’s like a big brother to them, if not maybe father,” offensive coordinator Randy Fichtner said. “That’s a lot on a guy who like you said is 23, but he has been here. He’s seen a lot. He can give back a lot. I remember (former Steelers wide receiver) Hines (Ward) and how much he wanted to always give back to the younger players. That’s just that important to do, and JuJu is doing it just like a lot of great veterans, in Pittsburgh at least, do it.” 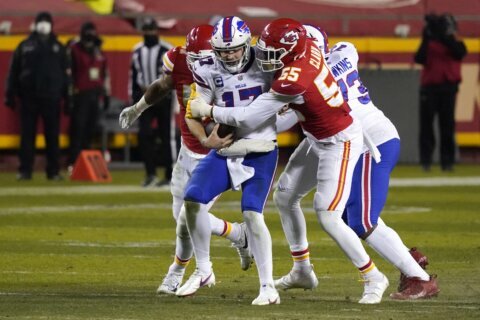