ORCHARD PARK, N.Y. (AP) — The Seattle Seahawks played so poorly, coach Pete Carroll wasn’t sure what team he was watching from the sideline.

If it wasn’t Russell Wilson uncharacteristically coughing up the ball, it was the Seahawks’ porous defense showing no resistance against the Buffalo Bills’ Josh Allen-led offense in a 44-34 loss on Sunday.

“What I will tell you is I don’t recognize that game. We haven’t seen us look like that, and it’s a game that I don’t have any place in my brain for it,” Carroll said. “It’s just such an out-of-character game across the board that I don’t even recognize us.”

The NFC West-leading Seahawks (6-2), pegged as a Super Bowl contender since early in the season, have lost two of three.

On a day Carroll announced signing a multiyear contract extension, he watched his team give up the most points in his 11 seasons in Seattle and lose by double digits for just the seventh time since Week 9 of 2011.

Buffalo opened a 17-0 lead before the game was 20 minutes old, and Wilson couldn’t keep pace as he turned the ball over four times, with two interceptions and two lost fumbles.

What’s more worrisome is a defense that continues squandering a season in which Wilson has emerged as an MVP contender. The Seahawks reached the midpoint of the season allowing 30-plus points and 460-plus yards per game.

The once-proud Legion of Boom is looking more like a bust.

Seattle barely made a dent against a Josh Allen-led attack in which the Bills quarterback’s 24 completions and 282 yards passing were the most through the first half by a Buffalo player since at least 1991.

Safety Jamal Adams’ return after missing four games with a groin injury barely made a difference for a unit that has now surrendered 400-plus yards of offense seven times.

“I’m not happy with my performance,” Adams said.

Carlos Dunlap, acquired in a trade with Cincinnati, he had a sack in his Seahawks debut.

While the Seahawks finished with a season-high seven sacks, they were burned too often when blitzing. That was particularly apparent on a key play early in the fourth quarter, after the Seahawks cut Buffalo’s lead to 27-20.

Carroll called a blitz with the Bills facing third-and-16 at the Seattle 35. Allen countered with a quick pass to his right to John Brown, who followed his blockers and cut up the middle for a 33-yard gain. Zack Moss scored on a 1-yard run two plays later.

Carroll blamed himself, saying he wasn’t anticipating the Bills to come out throwing.

“These guys didn’t even try to run the football today. We didn’t expect that to happen,” Carroll acknowledged. “We had a real nice plan for how they were going to run it. We have to be able to adapt better.”

Until Seattle can shore up its defense, the Seahawks are going to have to rely on Wilson and a high-scoring offense to carry the load.

Seattle became the NFL’s sixth team to score 25 or more points in each of its first eight games. Wilson finished 28 of 41 for 390 yards, but it wasn’t enough.

“We scored 34 points. We’re a pretty good offense, but I think that we can be better,” said Wilson, who was sacked five times. “I know it’s always easy to harp on the bad … but also understand that we also did a lot of good.” 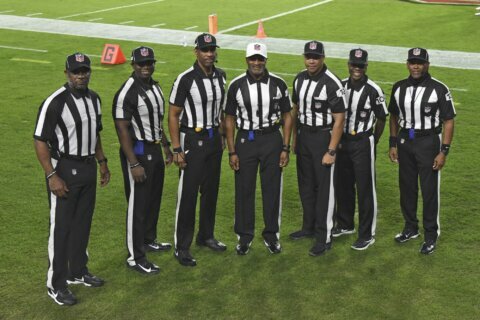