Kyler Murray looked like a potential MVP candidate for much of the first half of the season. He made a…
Listen now to WTOP News WTOP.com | Alexa | Google Home | WTOP App | 103.5 FM

Kyler Murray looked like a potential MVP candidate for much of the first half of the season. He made a lot of good throws and the quarterback was a wizard with his feet, slipping past defenses with uncanny runs that scored touchdowns or kept drives alive.

Over the past two weeks, he’s looked fairly ordinary.

So it’s no surprise the Cardinals have lost those two games, including Sunday’s 20-17 setback to the Patriots. The Cardinals built an early 10-0 lead before slowly watching the advantage slip away. New England’s Nick Folk kicked a 50-yard field goal as time expired to win the game.

Murray hasn’t been terrible, but it’s become clear they need him to be special for the offense to be among the NFL’s elite. He was 23 of 34 for 170 yards, no touchdowns and one interception against the Patriots. He also ran for just 31 yards after rushing for a season-low 15 yards against the Seahawks on Nov. 19.

The regression has left some wondering if the NFL has figured out how to handle Murray.

“I’m not sure if ‘figured out’ is the right word,” coach Kliff Kingsbury said. “They obviously had a good plan and wanted to try and contain him in the running game, and when that happens, we’ve got to be more productive with the backs in getting yards that way. I thought at times we were, but just not consistent enough in that run game.”

The Cardinals need to figure it out in a hurry. Arizona (6-5) has a crucial NFC West game against the Los Angeles Rams on Sunday.

“I don’t think I have to run for us to be successful,” Murray said. ”I mean, I’m very confident about running backs. … They choose to take me out of it, I’ve got to hand the ball off.”

Rookie linebacker Isaiah Simmons has had a sack in each of his last two games. The No. 8 overall pick was called for a costly unnecessary roughness play on the Patriots’ winning drive, but for the most part, he’s growing into the player the Cardinals hoped he would become.

It was a tough game for Arizona’s special teams, which gave up a big play on both the punt and kickoff return teams. Zane Gonzalez missed a 45-yard field goal in the fourth quarter that would have put the Cardinals ahead.

Defensive coordinator Vance Joseph continues to put the Cardinals in a position to win despite multiple injuries, especially along the line. He’s helped Simmons quickly develop during his rookie season and adjusted when new pieces (linebacker Golden and cornerback Dre Kirkpatrick)— were added to the lineup.

Murray. This is all relative because he’s still a very good player. But Murray hasn’t looked the same the past few weeks when he hasn’t been able to run the ball. He was on pace for a 1,000-yard season a few weeks ago but has managed just 46 yards on the ground over the past two games. If it weren’t for a miracle heave to DeAndre Hopkins to beat the Bills, the Cardinals would have lost four straight.

Kingsbury said he’s hopeful that wide receivers Larry Fitzgerald and Trent Sherfield, along with safety Deionte Thompson, should return from reserve/COVID-19 for Sunday’s game against the Rams.

3 — The Cardinals have lost five games this season and three of them (Patriots, Lions and Panthers) have come against teams with a sub-.500 record.

The Cardinals have a huge NFC West game against the Rams on Sunday. A win would put them in a tie with the Rams for second place and keep them in range of the leading Seahawks. If the Cardinals can get past the Rams, they have two winnable games on the horizon against the New York Giants and Philadelphia Eagles. 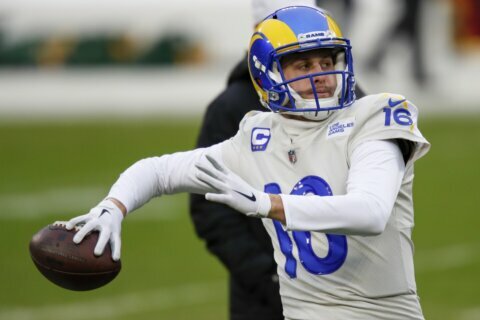