Minnesota at Chicago, 8:15 p.m. EST, ESPN — The Bears try to stop a three-game losing streak when they host their resurgent division rival. Chicago (5-4) has won four straight over the Vikings (3-5) and is 4-0 against them since coach Matt Nagy took over in 2018. The Bears have been particularly dominant at Soldier Field, winning 14 of 17 against Minnesota since the stadium reopened in 2003 following renovations. The Vikings got off to a 1-5 start, but wins over Green Bay and Detroit have them in contention. They can thank Dalvin Cook. The NFL’s rushing leader has 478 yards and six TDs from scrimmage over the past two weeks. Chicago’s offense has ranked among the worst in the NFL all year.

— Alex Smith, Washington, made his first start since breaking his right leg in two places nearly two years ago and had career highs with 38 completions and 390 yards passing in a 27-24 loss to the Detroit Lions.

— Aaron Rodgers, Packers, threw for 325 yards and two touchdowns and ran for a score in Green Bay’s 24-20 win over the Jacksonville Jaguars.

— Ronald Jones, Buccaneers, had a franchise-record 98-yard touchdown run, becoming the fourth NFL player with a TD run of 98 yards or longer, and finished with a career-high 192 yards in Tampa Bay’s 46-23 win over the Carolina Panthers.

— D’Andre Swift, Lions, had 16 carries for 81 yards and five catches for a career-high 68 yards and a touchdown in the rookie’s first career start as Detroit beat Washington 27-24.

— Marquez Valdes-Scantling, Packers, caught four passes for a career-high 149 yards, including a 78-yard touchdown, in Green Bay’s 24-20 win over Jacksonville.

— DeAndre Hopkins, Cardinals, had seven receptions for 127 yards, including a spectacular touchdown catch on a Hail Mary with 2 seconds left to give Arizona a 32-30 victory over Buffalo. Cole Beasley, Bills, had 11 catches for 109 yards and a touchdown, while teammate Stefon Diggs, caught nine passes for 93 yards and a touchdown.

— Marvin Jones, Lions, had eight receptions for 96 yards and a touchdown in Detroit’s 27-24 win over Washington.

— Matt Prater, Lions, drilled a 59-yard field goal on the final play of the game to give Detroit a 27-24 win over Washington. Prater was 3-for-3 on field goals, including a 53-yarder earlier in the game, and perfect on extra points.

— Riley Dixon, Giants, averaged 53.3 yards on four punts, including a 71-yarder, and placed all four inside the 20-yard line in New York’s 27-17 win over the Philadelphia Eagles.

—Jason Myers, Seahawks, hit a 61-yard field goal as time expired in the first half of Seattle’s 23-16 loss to the Los Angeles Rams. Myers was perfect on the day, also connecting from 39 and 37 yards.

— Darious Williams, Rams, made an end zone interception in the first half and a spectacular third-down pick near midfield in the third quarter of Los Angeles’ 23-16 win over Seattle. Leonard Floyd, Rams, sacked Russell Wilson three times and also recovered Wilson’s fumble on a snap.

— Jason Pierre-Paul, Buccaneers, had a sack and an interception in Tampa Bay’s 46-23 win over Carolina.

With his 98-yard touchdown run against Carolina, Tampa Bay’s Ronald Jones became the fourth NFL player with a TD run of 98 yards or longer, joining Tony Dorsett, Derrick Henry and Ahman Green. … The Miami Dolphins surpassed their 2019 win total, beating the Los Angeles Chargers to improve to 6-3. Miami went 5-11 last year. … The Pittsburgh Steelers moved to 9-0 with a win over division rival Cincinnati. The last team to win its first nine games was Carolina in 2015. … There have been 11 field goals of 50 yards or more so far in Week 10, tying Week 13 of the 2012 season for the most 50-plus-yard kicks in a single week in NFL history.

Arizona’s Kyler Murray has run for at least one touchdown in five consecutive games. He is the fourth quarterback in NFL history and the first since Tobin Rote in 1956 with a streak of rushing TDs that long. The record is Johnny Lujack with six in 1950. … Nick Chubb and Kareem Hunt became the first Browns teammates to rush for 100 yards each in the same game since Hall of Famer Leroy Kelly and Ernie Green did it in 1966. … Jacksonville’s Keelan Cole became the first Jaguar to score on a punt return and a reception in the same game, as well as the first player to accomplish that feat against the Packers. … All four AFC teams that entered the week 5-3 (Raiders, Colts, Dolphins and Browns) won this week, giving the AFC nine teams with at least six wins. … The Raiders had four interceptions in a game for the first time since 2008, when they picked off Jake Delhomme four times in a loss to Carolina. … New Orleans’ Alvin Kamara scored three touchdowns (two rushing, one receiving) and now has 17 games with at least two TDs in his four-year career. The record for multiple-score games in a player’s first four seasons is Larry Johnson with 18. … Miami’s Tua Tagovailoa improved to 3-0 as a starter and has yet to throw an interception, joining Carson Wentz (2016) as the only rookie QBs in the Super Bowl era to win their first three starts and throw zero picks.

Kyler Murray and DeAndre Hopkins connected on arguably the play of the year in the NFL, a 43-yard desperation pass with 2 seconds left that gave the Arizona Cardinals a 32-30 victory over the Buffalo Bills. The game appeared lost for the Cardinals until Murray rolled out to his left as the seconds ticked off the clock. He flung the ball toward the end zone, where Hopkins was waiting with three Buffalo defenders draped all over him. Somehow, the three-time All-Pro came down with the ball, and the Cardinals started a wild celebration in the end zone.

The Saints saw quarterback Drew Brees sidelined by injury for the second straight season. The 41-year-old quarterback was pulled at halftime of New Orleans’ 27-13 win over the San Francisco 49ers. Brees suffered a rib injury that appeared to occur when defensive tackle Kentavius Street was called for a personal foul on a sack in which he got a clean shot at the 41-year-old quarterback and landed directly on top of him. Jameis Winston replaced Brees at the start of the third quarter and completed six of 10 passes for 63 yards. Last year, backup Teddy Bridgewater played effectively as New Orleans went 5-0 while Brees was out with a hand injury.

Ben Roethlisberger was forced to stay away from the Steelers’ practice facility all week because of COVID-19 protocols, but the lack of practice time was no hindrance as he threw for 333 yards and four touchdowns in a 36-10 win over the Cincinnati Bengals that moved Pittsburgh to 9-0.

With gusting winds making throwing all but impossible, the Browns relied on their ground game against the Texans. Nick Chubb returned after missing six weeks with a sprained right knee, rushing for 126 yards and a touchdown on 19 carries. Kareem Hunt ran for 104 yards, also on 19 carries. The duo became the first Browns to rush for 100 yards each in the same game since Hall of Famer Leroy Kelly and Ernie Green did it in 1966. Cleveland led 3-0 at halftime, the lowest-scoring first two quarters in the NFL this season.

Saints quarterback Drew Brees suffered a rib injury when he was sacked by San Francisco’s Kentavius Street, who was flagged for a personal foul for landing most of his body weight on the 41-year-old quarterback. Jameis Winston replaced Brees at the beginning of the second half. … Panthers quarterback Teddy Bridgewater left the fourth quarter of Carolina’s loss to Tampa Bay with a knee injury. P.J. Walker took his place. … Rams left tackle Andrew Whitworth left late in the first half against Seattle with a knee injury. Whitworth had played every snap this season and 99% of last season’s snaps for Los Angeles.

“It was on three people. They were in position. It was just a better catch by I,” Arizona’s DeAndre Hopkins said of his game-winning catch of a Hail Mary throw by Kyler Murray to give the Cardinals a 32-30 win over the Bills.

“Every time you play and lose, for me — I’m not going to talk about anybody else — there’s something that’s in my soul that just gets (expletive) ripped out. That’s how I feel,” Jaguars coach Doug Marrone said after Jacksonville’s eighth straight loss. 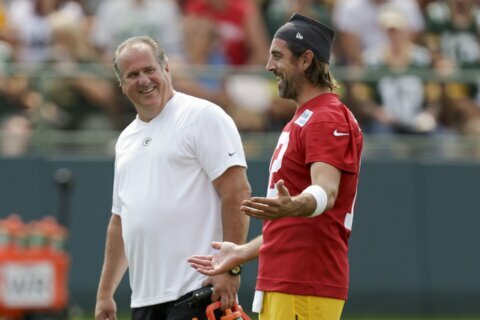 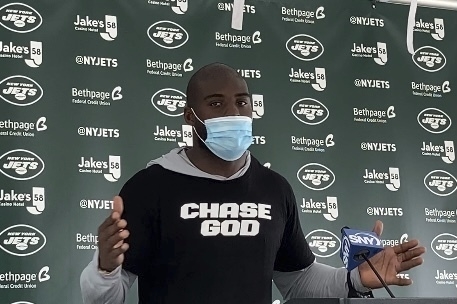