NEW YORK (AP) — New York Jets quarterback Sam Darnold is doubtful to play Monday because of an injured shoulder, with Joe Flacco expected to start in his place against the New England Patriots.

Darnold sat out practice Saturday after the quarterback had some issues throwing Friday.

“Unless something strange happens, Joe will be the starter for this game on Monday,” coach Adam Gase said.

Darnold sprained the AC joint in his right shoulder against Denver on Oct. 1 and missed two games. He reinjured it last Sunday at Kansas City when he took a hard hit, but remained in the game.

“I think he started out OK,” Gase said of Darnold’s practice Friday. “Obviously, he was going to do everything he could to be able to go for this game. As practice went on, he felt there were some throws that he wasn’t comfortable with that when he threw them.”

Darnold wasn’t happy with the velocity or arc of some of the passes he threw, and he told the team he wasn’t feeling right.

“I’m glad that he did that,” Gase said. “That’s what I think we needed to have that communication back. I know it’s devastating to him because he’s always been able to throw the ball the way he has needed to. I think yesterday was the first time that he felt it did not feel the way that he wanted it to heading into this game.”

Darnold struggled in the two games since his return from the initial injury, throwing for just 253 yards with two interceptions.

The 35-year-old Flacco will likely make his third start for the Jets. He has thrown for 397 yards with one touchdown and one interception this season. Flacco took the snaps with the starters on Thursday, split them with Darnold on Friday before taking them all again Saturday.

“The bottom line is, it’s a lot easier going into the game knowing that I’m playing now than it is to come off the bench at some point in the game,” Flacco said, adding that he’s more comfortable running the offense now than he did the first few appearances.

“I’ve gotten my feet wet and all those kinds of things,” he said. “So, I feel really good going into the game.”

The 0-8 Jets have their bye-week break after the game Monday night, giving Darnold’s shoulder extra time to heal.

“That was kind of where my brain went was, all right, if you have that, this could help him,” Gase said. “I don’t think he was thinking that. He was just being honest with us.”

Linebacker Blake Cashman (hamstrings) and tight end Trevon Wesco (ankle) were ruled out for the game against New England.

Kicker Sam Ficken (right groin) did not practice and is doubtful to play, meaning Sergio Castillo would handle kicking duties for the third consecutive game. 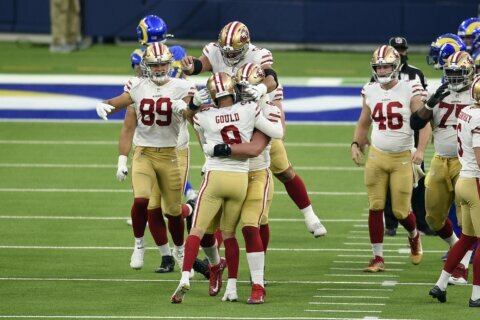