GLENDALE, Ariz. (AP) — Less than 24 hours after a clearly frustrated Kliff Kingsbury answered questions about a 34-31 loss to the Dolphins, Arizona’s coach was in a much better mood.

The Cardinals appear ahead of schedule on their franchise rebuild and have a 5-3 record midway through the season. Second-year quarterback Kyler Murray has turned into a legit star. The offense is among the best in the NFL, and the defense, while a bit banged-up, is improved from last season.

For Kingsbury, it’s not time to be greedy. It’s time to get to work.

“Obviously, we’d love to be undefeated and so would every other team,” Kingsbury said. “That’s not where we’re at, but I do think we’re in a position to kind of control our own destiny. At the midway point, that’s about all you can ask for.”

The Cardinals have turned into one of the most consistent offensive teams in the NFL, scoring 21 points or more in all eight games and topping 30 points in five. Murray has thrown for 2,130 yards and 16 touchdowns and developed an instant connection with DeAndre Hopkins, who came to the Cardinals in a trade during the offseason.

Hopkins has 60 catches for 734 yards and three touchdowns.

Against the Dolphins, Murray threw for 283 yards and three touchdowns and also ran for 106 yards and one touchdown. Performances like that are starting to become common. It’s a big reason why Arizona leads the NFL with 422 total yards per game.

“It’s progressing every single day, every game,” Murray said last week. “I think we have a better feel for who we are. We go out there and execute a lot better, and I think it’s starting to show. Being the No. 1-rated offense, it’s not easy to do that in this league. We’ve got a lot of work to do, but I think we’re doing something right. We’re on the right track.”

It’s become increasing clear that the Cardinals made the correct choice when selecting Murray with the No. 1 overall pick in the 2019 draft. Even at a listed 5-foot-10, he sees the field well and his passing statistics have improved in just about every category.

But the true revelation has been on the ground. Murray is on pace for 1,000 yards rushing this season and he usually makes multiple plays per game that leave frustrated defenders flailing as he scoots past them. It doesn’t take much imagination to see him being an MVP candidate in the very near future — and some would argue he’s already there.

After an encouraging start, the Cardinals’ defense has looked very average the past two games. Giving up 34 points to the Seattle Seahawks and elite quarterback Russell Wilson is one thing, but giving up 27 of the 34 points to the Dolphins and rookie quarterback Tua Tagovailoa can’t be as easily explained away.

Yes, the Cardinals have suffered a lot of injuries and losing 2019 All-Pro linebacker Chandler Jones to a biceps injury in October was a big blow. But if opponents keep scoring in the 30s on a weekly basis, that puts a lot of pressure on Murray and the offense to be perfect.

WR Christian Kirk. It looked like the third-year receiver might have a lesser role because of Hopkins’ presence, but it’s become apparent that there are enough footballs to go around for both of them. Kirk has caught five touchdown passes over the past three games and teams are struggling to account for both receivers.

LB Devon Kennard. He’s struggled with injuries and missed the Dolphins game because he was on the reserve/COVID-19 list. Those issues limited him to just 10 tackles this season, including two sacks. Kingsbury is hopeful Kennard can return next week and if he could provide more production, it would go a long way toward helping the struggling defense.

Outside of losing Jones, injury news is trending in a positive direction for Arizona. Tight end Maxx Williams and starting safety Jalen Thompson returned and played well against the Dolphins. Kingsbury is hopeful Kennard and cornerback Byron Murphy Jr. will be cleared from the COVID-19 list this week. There’s also hope that starting running back Kenyan Drake (ankle) will return soon.

7 — Murray has already run and thrown for a touchdown in seven games this season. He needs to do it just one more time to tie the NFL single-season record.

Life doesn’t get easier this week for the Cardinals, who host the 7-2 Buffalo Bills to wrap up a three-game homestand. Arizona’s offense is playing at a consistently high level. If the defense can get back to the way it played over the first few weeks, this team could be a factor in the NFC playoffs. 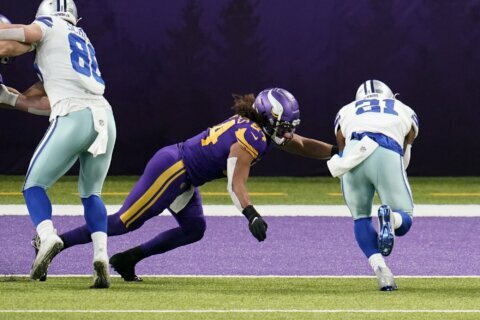 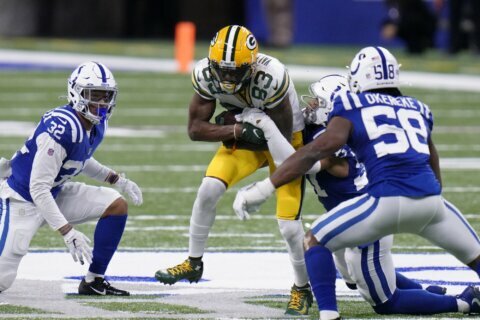