From season-altering to bizarre, injuries hit NFL yet again

ARLINGTON, Texas (AP) — From the season-altering to the bizarre, injuries are playing their traditionally significant role in the NFL.

Dak Prescott’s Dallas Cowboys are on the verge of a lost year when they hoped to contend after a broken ankle ended the quarterback’s season. One of their NFC East rivals, the New York Giants, barely saw their offense fully stocked, with running back Saquon Barkley tearing an ACL in Week 2.

Tyrod Taylor lost his starting job with the Los Angeles Chargers after a team doctor accidentally punctured a lung while giving the quarterback an injection. Rookie QB Justin Herbert has exceeded expectations since replacing Taylor and kept the job.

Las Vegas Raiders right tackle Trent Brown ended up in a hospital, reportedly because an IV pushed air into his bloodstream.

Brown also recently went back on the COVID-19 list, a newcomer among potential ailments with the NFL playing during a pandemic. Some players opted out before the season started because of the coronavirus.

Star pass rusher Von Miller was poised for a big year in Denver before injuring his left ankle days before the opener and eventually needing surgery. The outside linebacker is hoping to beat the odds and return in December.

Few teams have had the volume of injuries that have hit defending NFC champion San Francisco. Quarterback Jimmy Garoppolo and running back Raheem Mostert have sprained ankles, and tight end George Kittle broke a foot.

Defensive end Nick Bosa (knee) and cornerback Richard Sherman (calf) are on injured reserve as the 49ers try to keep pace in the difficult NFC West with only eight players who have started every game.

San Francisco is the only team in the division with a losing record, at times playing without its top three cornerbacks, both starting safeties, three of the four best defensive ends, the top two receivers, three of the top four running backs and the top two tight ends, not to mention Garoppolo.

No team has a winning record in the NFC East, which is why the Cowboys and Giants aren’t completely out of the race while tied for last at 2-7.

In addition to Prescott’s gruesome ankle injury in a Week 5 win over the Giants, the Cowboys lost tight end Blake Jarwin (knee) and both starting tackles — Tyron Smith (neck) and La’el Collins (hip) — to season-ending injuries. The offensive line has been in flux all season because of a variety of injuries.

“I’ve just never been around one of these situations where every week is different than the week before,” first-year Dallas coach Mike McCarthy said. “Whether it’s your lineup on the offensive line, who your quarterback is. We’ve played, what, four quarterbacks in the last five weeks? It’s just a different year.”

Philadelphia (3-4-1) leads the NFC East despite nine of the 11 starters missing at least two games apiece with injuries. The exceptions are quarterback Carson Wentz and center Jason Kelce.

The safety of playing surfaces has been a topic for players, with union president JC Tretter, Cleveland’s center, calling for all stadiums to install grass fields. Of the 30 stadiums, 13 have synthetic surfaces.

Two of the game’s best receivers are out for the season with torn knee ligaments in Denver’s Courtland Sutton, who was injured making a tackle on an interception in Week 2, and Cleveland’s Odell Beckham Jr. New England’s Julian Edelman had knee surgery, and his season is in doubt.

Carolina All-Pro running back Christian McCaffrey returned this past weekend against Kansas City after missing six games with a high ankle sprain and had 28 touches for 151 yards — 18 carries for 69 yards and 10 catches for 82 yards.

“He can’t come back soon enough,” first-year coach Matt Rhule said before the 33-31 loss to the defending Super Bowl champion Chiefs. The Panthers are also without four defensive starters.

New York Jets quarterback Sam Darnold missed his third game of the season Monday night with a sprained right shoulder in a 30-27 loss to New England that dropped the NFL’s only winless team to 0-9.

Jets receivers have taken turns on the sidelines, from Jamison Crowder (hamstring and groin) to Breshad Perriman (ankle and concussion), Chris Hogan (ankle) and rookie Denzel Mims, a second-round draft pick who didn’t make his debut until Week 7 because of injuries to both hamstrings in training camp.

That might help explain why New York is last in the league in points, total yards and passing yards.

New Orleans’ star receiver, Michael Thomas, has had a tumultuous season in part because of ankle and hamstring injuries. The 2019 Offensive Player of the Year was also suspended for a game, so he sat for seven weeks after the opener.

Quarterback Drew Brees saw upside in the NFC South-leading Saints learning to cope without Thomas. They lost the first two without him before winning four straight.

In Thomas’ return Sunday, New Orleans extended its winning streak to five games with a 38-3 rout of Tom Brady and Tampa Bay. Thomas had five catches for 51 yards, and was one of 12 players to catch at least one pass.

“You always hope that you wouldn’t be without him, but obviously I think that that time comes for everybody where you’ve got to find ways to win without a certain guy or maybe a few guys,” Brees said.

Arizona lost All-Pro linebacker Chandler Jones to a season-ending biceps injury five games into the season, just as Tennessee did with left tackle Taylor Lewan, who tore his ACL in an overtime win against Houston.

“We’re going to miss Taylor all the way around,” quarterback Ryan Tannehill said. “He always has something funny to say, whether it’s in a walkthrough or practice. His antics in the huddle, in games, definitely just going to miss him.”

It’s a familiar refrain every season in the NFL. 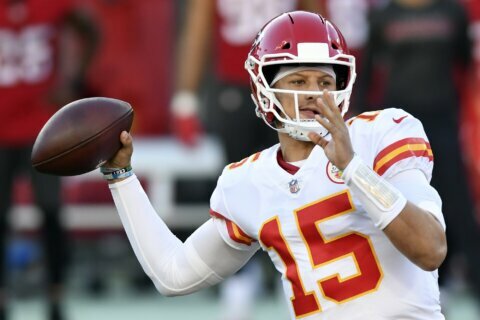 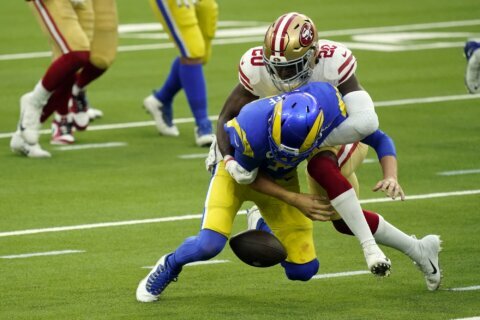