Even with injury absences, Seahawks find way to keep rolling

RENTON, Wash. (AP) — However the rest of the season plays out, Pete Carroll and the Seattle Seahawks will have…
Listen now to WTOP News WTOP.com | Alexa | Google Home | WTOP App | 103.5 FM

RENTON, Wash. (AP) — However the rest of the season plays out, Pete Carroll and the Seattle Seahawks will have some fondness for what happened in Week 8.

The 37-27 win over division rival San Francisco may or may not play a major role in where the Seahawks season goes from here.

But the message that came through is something he hopes is taken forward. No matter how many injuries or starters are missing, the Seahawks can still find ways to be successful even with the most unlikely of contributors.

“I think it says a tremendous amount that it didn’t matter who was playing. The guys just stepped up and did their job, and busted their tails to get it done,” Carroll said after the victory.

Of course, it helps to have Russell Wilson, DK Metcalf and Bobby Wagner, who all had terrific performances in the win over San Francisco that improved Seattle to 6-1. Wilson threw four more touchdowns. Metcalf had a career day receiving with 12 catches for 161 yards. Wagner had 11 tackles and two sacks in a dominant defensive performance.

But Seattle beat the 49ers with essentially one healthy running back in rookie fourth-round pick DeeJay Dallas, who found the end zone twice. Seattle was without starter Chris Carson and backup Carlos Hyde, and Travis Homer played just seven snaps because of a sore knee.

At various times, the Seahawks used converted tight end Stephen Sullivan as a pass-rushing defensive end, a position he hadn’t played since high school. Sullivan played 22 snaps and had one tackle.

Seattle does have reinforcements coming, possibly this week against Buffalo. Carlos Dunlap is likely to make his Seattle debut. Jamal Adams should return after missing four games. And former All-Pro Damon “Snacks” Harrison may finally be added to the active roster.

In consecutive weeks Seattle showed just how good its top two wide receivers are. Last week against Arizona it was Tyler Lockett going for 15 catches, 200 yards and three touchdowns. On Sunday, Metcalf could not be guarded. Metcalf set career highs with 12 catches, 161 yards and had two TD receptions.

On his 46-yard touchdown, Metcalf caught a 12-yard pass, traversed the field and tiptoed down the sideline without being touched by a San Francisco defender.

The past two weeks are strengthening the case that Lockett and Metcalf are the best duo in the league at the moment.

Seattle still has some work to do when it comes to closing out games in the fourth quarter. It got a little dicey in the final minutes after San Francisco pulled within 30-20 and only a 2-point conversion overturned on replay review kept it from becoming a one-score game. Seattle allowed Nick Mullens to throw for 238 yards in the fourth quarter.

It’s a minor quibble considering the overall performance, but this isn’t the first time Seattle’s had a shaky fourth quarter.

Defensive coordinator Ken Norton Jr. called his best game of the season, taking advantage of a depleted San Francisco backfield and quarterback Jimmy Garoppolo’s lack of mobility. Seattle brought extra rushers constantly, whether it was Wagner up the middle or defensive backs such as D.J. Reed coming off the edge. The mix of pressures worked as the 49ers were held to 117 total yards through three quarters before going off in the fourth quarter while trailing big.

Veteran tight end Greg Olsen continues to have mixed results in being used in Seattle’s offense. Olsen had zero catches on four targets against the 49ers. It’s the second time this season Olsen has been shut out and he has just three total catches over the past three games.

Seattle picked up no new injuries of significance out of the victory and may start to see some key players return this week. Adams is expected to be back, while DE Benson Mayowa (ankle) is hopeful of returning. The unknown remains at running back where Chris Carson (foot) and Carlos Hyde (hamstring) won’t have their status determined until late in the week. Carroll sounded pessimistic about Hyde and added that Carson’s plan is to test out his sore foot on Friday.

Carroll did say that WR Phillip Dorsett, who hasn’t played yet this year, was not doing well with his ongoing foot issue, but declined to elaborate on any next steps.

3 — Metcalf is the third different player this season to have 10 or more receptions, at least 150 yards and at least two TDs in a game. Green Bay’s Davante Adams has done it twice. Lockett last week vs. Arizona was the other.

Seattle makes its third trip East already with a matchup against the Bills. It will be the first time Seattle plays in Buffalo since 2008, a 34-10 Bills victory. When the teams met in 2012, the game was played in Toronto, a 50-17 Seattle win. 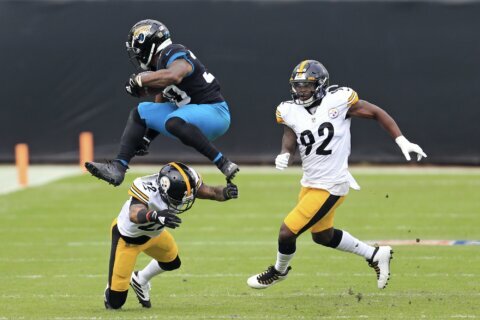