Brees was unable to finish last Sunday’s game after absorbing a heavy hit on a sack attempt by 287-pound San Francisco defensive tackle Kentavius Street, who was penalized for roughing on the play.

Street landed on the right side of Brees’ torso as the two went to the ground, and Brees was diagnosed Monday with rib fractures and a collapsed lung.

Brees, 41, has played efficiently this season for New Orleans, completing 73.5% of his passes for 2,196 yards and 18 touchdowns with three interceptions in eight-and-a-half games.

An injured reserve designation previously would end a players’ season with fewer than eight games remaining, but this year the NFL has adopted more flexible roster rules because of the coronavirus pandemic.

Brees already was not expected to play this week. New Orleans’ other two quarterbacks are Jameis Winston and Taysom Hill, who have been splitting time working with first-team receivers during periods of practice open to reporters.

Sean Payton declined after practice Friday to publicly name a starter for Sundays’ home game against Atlanta, but also said he had made a decision.

After Brees left last Sunday’s victory over the 49ers, Winston took most of the snaps, going 6 of 10 for 63 yards. He did not throw for a touchdown and was nearly intercepted when safety Jimmie Ward dropped a pass over the middle.

But Hill, who has played throughout the season as a change-of-pace, option quarterback, and also has served in a utility role on special teams and as a tight end, is reportedly Payton’s choice to take the first snaps against the Falcons.

Hill has attempted just five passes this season, but has completed four of them for 86 yards. He has not thrown a touchdown pass or interception this season.

Hill has been with New Orleans since his rookie season in 2017 and this offseason signed a two-year extension worth about $21 million, a signal that New Orleans considered him a legitimate candidate to step in when Brees retires.

But Hill has yet to start a regular season game. When Brees missed five games last season, Hill was kept in his regular utility role while then backup Teddy Bridgewater served as a fill-in starter, going 5-0.

Now it appears Hill could be in line for his chance to show how well he can run the offense for a sustained period during the game. 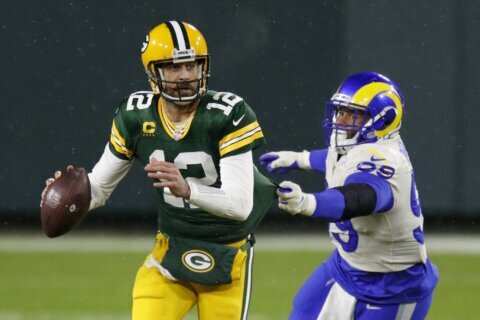