TAMPA, Fla. (AP) — Drew Brees vs. Tom Brady, and the battle for supremacy of the NFC South, was a one-sided affair.

Brees threw for 222 yards and four touchdowns, regaining the NFL career TD pass lead and lifting the New Orleans Saints into first place with a 38-3 rout of Brady and the Tampa Bay Buccaneers on Sunday night.

The three-time defending division champion won their fifth straight game, intercepting Brady three times and completing a season sweep of the Bucs (6-3), who also suffered a double-digit loss at New Orleans in Week 1.

“Each time you can win and find different ways to win, I think it just builds confidence and creates momentum,” Brees said.

“Obviously, tonight was a great night,” he added. “All the way around, in all three phases, it was pretty exceptional.”

The Saints (6-2) weren’t perfect — turning the ball over twice themselves — however the offense was extremely efficient with receivers Michael Thomas and Emmanuel Sanders back in the lineup, and the defense played its best game of the season.

Brees was 26 of 32 passing, including first-half TD throws of 14 yards to Tre’Quan Smith, 8 yards to Adam Trautman and 12 yards to Sanders, who missed the previous two games while on the COVID-19 list. The 41-year-old added a 3-yarder to Josh Hill to make it 38-0 with just over nine minutes remaining.

“We knew this was a big game, divisional opponent, Tampa’s playing extremely well,” said Brees, who lost a fumble on Tampa Bay’s only sack but did not throw an interception.

“Obviously we’ve been a little short-handed over last few weeks … Tonight, it was good to get everybody back, get them back in the mix,” Brees added. “We wanted the spread the ball around, we wanted to play complementary football. I can’t say enough about our defense, they just played phenomenal.”

Brees regained the league career TD pass lead with 564, three more than the 43-year-old Brady, who had thrown for 17 touchdowns and just one interception over his previous six games. The Saints intercepted Brady twice in a 34-23 season-opening win, with Janoris Jenkins returning one for a TD.

Defensive Tackle David Onyemata and safeties Marcus Williams and Malcolm Jenkins picked off Brady this time — the last on a throw the six-time Super Bowl threw wildly into the middle of the field as scrambled to avoid a relentless pass rush.

“We didn’t play well in any phase of the game,” Brady said.

“Everyone’s got to do a lot better,” the Bucs quarterback added, “and it starts with me.”

Brady was sacked three times and finished 22 of 38 for 209 yards, including three completions for 31 yards to Antonio Brown, who made his debut for Tampa Bay in his return from an eight-game suspension for violating the NFL’s personal conduct policy.

The Bucs ran the ball just five times, including Blaine Gabbert’s kneel-down on the final snap of the night.

The Saints scored on five of their first six possessions to build a 31-0 halftime lead, and the Bucs were fortunate the biggest first-half deficit of Brady’s career wasn’t larger.

Jared Cook fumbled at the Bucs 2 with the Saints looking to build on an early 7-0 lead. But with Tampa Bay’s offense sputtering and one of the league’s stingiest defenses unable to slow down Brees, New Orleans pressed on.

“That’s the most complete game we’ve played … It’s poetry in motion when we get going like that,” Saints running back Alvin Kamara said.

Brady’s first interception, ending a Bucs franchise-record streak of 200 consecutive pass attempts without a pick, led to Kamara’s 1-yard TD run that made it 28-0 midway through the second quarter.

The Saints outgained the Bucs 241 yards to 36 up to that point. They added Will Lutz’s 36-yard field goal and a second interception, with Marcus Williams snaring a deep throw intended for Brown in the closing minutes of the opening half.

Arians was asked why, with the Bucs trailing by 38 points, he kept Brady in the game in the face of a strong pass rush.

“To get points on the board,” Arians said. “He’s the quarterback.”

Gabbert replaced Brady at the end after the Saints turned the ball over on downs with former Bucs quarterback Jameis Winston filling in for Brees in the final minute.

Brees and Brady, who also rank first and second on the career passing yards list, met for only the seventh time. Brees holds a 5-2 edge in the matchups.

The two chatted briefly on the field after the game.

“We’ve been playing against each other for 22 years? So, there’s obviously a lot of respect there,” Brees said.

“Throughout our careers I think what we both say is just how grateful we are to have this opportunity to play this great game,” Brees added, “to play as long as we’ve been able to play it, play with so many great teams, great coaches, great players. So, just thankful for that.”

Tampa Bay set an NFL record with just five rushing attempts in a 38-3 loss to New Orleans, and that includes backup quarterback Blaine Gabbert’s kneel-down on the final snap of the night. Ronald Jones ran three times for 9 yards, Leonard Fournette had one carry for no gain, and Gabbert lost a yard to give Tampa Bay 8 yards rushing for the game. The previous record for fewest runs was six, set four times previously and most recently by Minnesota against Buffalo in 2018.

Saints: WR Michael Thomas played for the first time since suffering a high ankle sprain during the Saints’ season-opening win over the Bucs. He finished with five receptions for 51 yards.

Saints: 49ers at home on Sunday.

Buccaneers: at Carolina on Sunday. 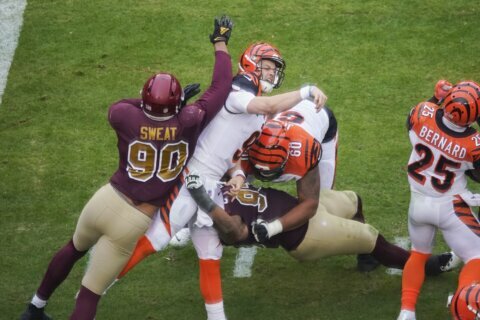 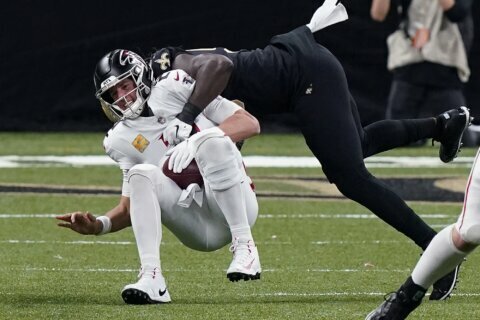 Falcons’ lopsided loss to Saints was a complete team effort 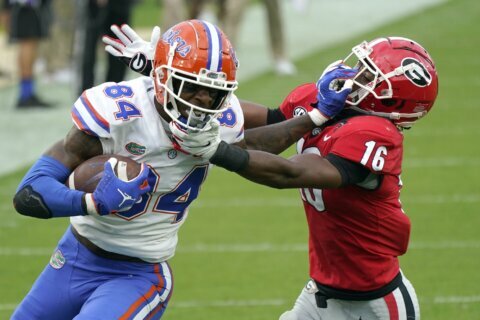 No. 6 Florida getting TE Pitts back after 2-week absence