SANTA CLARA, Calif. (AP) — The San Francisco 49ers have shut down their facility after receiver Kendrick Bourne tested positive for the coronavirus but are still scheduled to play Green Bay on Thursday night as of now.

The team said the positive test came back Wednesday morning and Bourne immediately went into self-quarantine after getting the diagnosis. He was later placed on the COVID-19 list.

“Our organization has entered the NFL’s intensive protocol and we are working with the league on contact tracing to identify high risk individuals,” the team said in a statement.

“All team functions will be conducted virtually today. The health and safety of our players, staff and community are the organization’s highest priority. We will continue to work closely with the NFL and medical professionals and will follow their direction.”

The Niners later placed starting left tackle Trent Williams, and receivers Brandon Aiyuk and Deebo Samuel on the COVID-19 list because of “high risk” contacts with Bourne. Samuel was already out this week with a hamstring injury.

A person familiar with the plans says the Thursday night game is still set to be played as scheduled. The person spoke on condition of anonymity because the league hasn’t made any announcement.

The Packers left Green Bay for California on Wednesday afternoon.

The absence of Bourne and Aiyuk are the latest blows to an already thin receiver group. Aiyuk is second on the team with 28 catches for 371 yards and two TDs, and Bourne is the third-leading receiver with 25 receptions for 352 yards and a touchdown.

All-Pro tight end George Kittle leads the team in receptions but is likely out for the season with a broken foot. Samuel is out this week with a hamstring injury and Richie James Jr.’s status is in doubt because of a sprained ankle.

The Niners also released 2018 second-round pick Dante Pettis earlier this week, leaving Trent Taylor as the only wide receiver on the active roster with a catch this season.

San Francisco also could call up receivers from the practice squad with Kevin White, River Cracraft and Chris Finke all options.

The positive test came just days after the 49ers played at Seattle. Seahawks coach Pete Carroll said that general manager John Schneider has been in touch with the Niners and acknowledged some concern.

“Of course we are,” Carroll said. “We just played them a few days back. We are doing our homework on with the timing of his exposure and all kind of stuff, and when he showed first and all that, to make sense of it. We have to be tuned into that and see what happens. I know they shut down today and they’re playing tomorrow, I believe. So we’ll see what happens there. All we can do right now is test and be aware of the connections.”

This is the first positive coronavirus test for the 49ers since the start of the regular season. They had three players on the COVID-19 list in the preseason, with James, running back Jeff Wilson Jr. and linebacker Fred Warner all spending time on the list.

The Packers are dealing with their own issues with the coronavirus after running back AJ Dillon tested positive on Monday. Running back Jamaal Williams and linebacker Kamal Martin were placed on the COVID-19 list on Tuesday as “high-risk” contacts to Dillon. 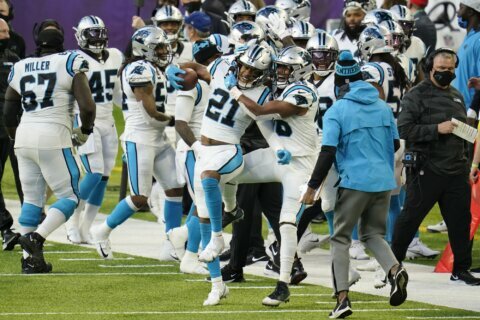