The Latest on Week 6 in the NFL (all times EDT):

For Tom Brady and Rob Gronkowski, it was just like old times in a new uniform.

Brady threw for 166 yards and two touchdowns, including one to Gronkowski, and the Tampa Bay Buccaneers rolled to a 38-10 win over the previously undefeated Green Bay Packers.

The two formed a prolific pair from 2010 to 2018 when both were with the New England Patriots. Gronkowski, a four-time All-Pro tight end, returned to the NFL after sitting out the 2019 season but got off to a slow start in his new home, catching just 12 passes over his first five games.

He caught five passes for a team-high 78 yards and a touchdown against the Packers. It was his first touchdown with Tampa Bay.

The Packers fell to 4-1 for the season. They jumped to a 10-0 lead in the first quarter before Tampa Bay reeled off 38 straight points. The NFL’s only remaining unbeaten teams are the Tennessee Titans, Pittsburgh Steelers and Seattle Seahawks.

Tua Tagovailoa played his first NFL snaps for the Miami Dolphins close to the end of their 24-0 win over the New York Jets on Sunday.

The former Alabama star and No. 5 overall pick in April’s draft completed both of his pass attempts for a total of nine yards. Starter Ryan Fitzpatrick threw for 191 yards, three touchdowns and two interceptions as the Dolphins built a 21-0 lead by halftime.

The Jets fell to 0-6 this season and are the only winless NFL team remaining. Quarterback Joe Flacco had a tough day, completing just 21 of 44 passes for 186 yards and an interception.

Tom Brady has thrown for 111 yards and two touchdowns to help the Tampa Bay Buccaneers build a 28-10 lead over the undefeated Green Bay Packers at halftime.

The Packers built an early 10-0 lead but the Bucs responded with 28 straight points. Jamel Dean had a 32-yard interception return to start the scoring. Brady hit Rob Gronkowski for a 12-yard touchdown with 1:02 left in the second quarter to cap the rally.

It’s been a tough afternoon so far for Green Bay quarterback Aaron Rodgers. He’s completed just 11 of 25 passes for 128 yards and has been intercepted twice, including Dean’s pick-six.

The New York Jets are the only team in the NFL that doesn’t have a win this season. It’s going to stay that way at least one more week if they can’t pull off a big second-half rally against the Miami Dolphins.

The Dolphins had a 21-0 halftime lead after Ryan Fitzpatrick threw for 147 yards, three touchdowns and one interception. The Jets had just 93 total yards.

There were three winless teams coming into Sunday’s game but the New York Giants earned their first victory by beating Washington 20-19. The Atlanta Falcons also got win No. 1 by beating the Minnesota Vikings 40-23.

New York Giants coach Joe Judge says that wide receiver C.J. Board has movement in his limbs after suffering a concussion and neck injury in the team’s win over Washington. Receiver Darius Slayton said Board may be able to go home tonight.

Board was carted off the field early in the third quarter after taking a big hit from Washington safety Deshazor Everett while trying to catch a low pass.

The Baltimore Ravens held off a big Philadelphia rally in the fourth quarter to beat the Eagles 30-28 and improve to 5-1 for the season.

The Ravens led 24-6 late in the third quarter after a 37-yard touchdown run by quarterback Lamar Jackson and pushed ahead 30-14 midway through the fourth quarter but the Eagles scored two late touchdowns to make things interesting. Philadelphia had a chance to tie the game on a 2-point conversion but quarterback Carson Wentz was stopped on a rushing attempt.

The Tennessee Titans have stayed undefeated with a 42-36 overtime victory over the Houston Texans.

Derrick Henry ran for a 5-yard touchdown to cap the Titans’ opening drive in overtime. He finished with 212 yards rushing, including a 94-yard touchdown run.

Tennessee’s Ryan Tannehill hit A.J. Brown on a 7-yard touchdown with 4 seconds left in regulation to tie the game at 36-all and send it to overtime. Houston’s Deshaun Watson has thrown for 335 yards and four touchdowns but never got the chance to take the field in overtime. Tannehill finished with 364 yards passing, four touchdowns and one interception. The Titans gained 601 total yards.

The other three remaining undefeated teams are the Pittsburgh Steelers, Green Bay Packers and Seattle Seahawks.

In another early game on Sunday, the New York Giants won their first game of the season by edging the Washington Football Team 20-19. The Atlanta Falcons also got their first win by beating the Minnesota Vikings 40-23.

The Tennessee Titans are vying to remain one of the NFL’s four undefeated teams in a tight game with the Houston Texans.

The other three remaining undefeated teams are the Pittsburgh Steelers, Green Bay Packers and Seattle Seahawks.

The Steelers beat the Browns 38-7 on Sunday while the Packers are about to play the Tampa Bay Buccaneers. The Seahawks are off this week.

Giants wide receiver C.J. Board was carted off the field early in the third quarter after taking a big hit from Washington safety Deshazor Everett while trying to catch a low pass.

He was diagnosed with a concussion and a neck injury and taken to a hospital for evaluation.

The winless Giants had a 20-13 lead late in the fourth quarter.

Cleveland quarterback Baker Mayfield’s day appears to be over. Head coach Kevin Stefanski pulled Mayfield in favor of backup Case Keenum late in the third quarter with the Browns trailing the Steelers 31-7.

Mayfield was limited in practice during the week due to a rib injury and struggled in the face of Pittsburgh’s fierce pass rush. Mayfield threw a pick-six to Minkah Fitzpatrick in the first quarter and another pick in the second quarter set up a Pittsburgh touchdown. He absorbed four sacks and took a series of shots while completing 10 of 18 passes for 119 yards with a touchdown and the two interceptions.

__ Will Graves reporting from Pittsburgh

The Houston Texans have grabbed the lead over the undefeated Titans with a handful of key plays in the third quarter.

Tennessee led 21-10 at halftime. But Houston got momentum when safety Justin Reid blocked a 27-yard field goal attempt by Stephen Gostkowski. After a 1-yard touchdown run by Houston’s David Johnson, the Titans lost left tackle Taylor Lewan to a knee injury that sent him limping gingerly to the locker room. Two plays later, Texans end J.J. Watt sacked Ryan Tannehill and stripped him of the ball. Jacob Martin recovered for Houston at the Titans 4.

Deshaun Watson found Randall Cobb at the right pylon for a 4-yard touchdown pass, putting Houston up 23-21 late in the third quarter.

Tennessee came into the game one of the NFL’s four remaining undefeated teams.

Minnesota Vikings quarterback Kirk Cousins has his team in a big hole against the winless Atlanta Falcons.

Cousins threw three first-half interceptions for the first time in his career, as the Vikings fell behind 20-0 at the break. The Falcons turned those three turnovers into 17 points. Cousins has 11 turnovers in six games this season, matching his 15-game total for 2019.

Cousins also became the first Vikings player to throw three first-half interceptions since Daunte Culpepper on Dec. 1, 2002, also against Atlanta. The Falcons won that game in overtime at the Metrodome.

Cleveland is looking like the Same Old Browns during their annual trip to Pittsburgh.

The Steelers built a 24-7 halftime lead thanks to some sloppy play by Browns quarterback Baker Mayfield. Mayfield threw a pick-six to Pittsburgh’s Minkah Fitzpatrick on Cleveland’s first possession and a second-quarter interception led to a touchdown pass from Ben Roethlisberger to James Washington.

The Browns are looking for their first win in Pittsburgh since 2003. The Steelers lost inside linebacker Devin Bush to a left knee injury in the second quarter.

Cleveland is off to a 4-1 start this season. Pittsburgh has a 4-0 record.

—- Will Graves reporting from Pittsburgh.

Bengals running back Joe Mixon has a right foot injury and his return is questionable. Mixon rushed 11 times for 44 yards and one touchdown before the injury.

Andrew Thomas is back at left tackle for the New York Giants to start the second quarter. The No. 6 overall pick didn’t start on Sunday after starting the first five games of the season.

Matt Peart, another rookie who was drafted in the third round, started.

Washington left guard Saahdiq Charles (left leg) was hurt on the second play from scrimmage. He has not returned. Washington wide receiver Antonio Gandy-Golden has been ruled out with a hamstring injury.

The winless Giants have a 13-10 lead over Washington late in the second quarter.

The Cincinnati-Indianapolis game got underway on time and on schedule, and the Bengals are glad it did as they produced their best start this season.

Cincinnati turned an early fumble recovery into a touchdown, then added another before the end of the first quarter and a third on the first play of the second quarter to make it 21-0. The Bengals scored 13 total points in the first quarter of their first five games.

Just two days earlier, it appeared the game might be postponed after four people at the Colts complex tested positive for COVID-19. But retests on all four determined they were false positives.

Indianapolis has now been outscored 41-10 in the first halves of the last two weeks against the league’s two Ohio teams — Cleveland and Cincinnati.

The New York Giants have benched left tackle Andrew Thomas, the No. 6 overall pick in the draft. He had started the first five games. Matt Peart, another rookie who was drafted in the third round, started.

Lions running back Adrian Peterson capped an opening-drive touchdown at Jacksonville, the 82nd time he’s had at least one rushing score in a game and moving him past Hall of Famer Walter Payton (81) for the fourth most in NFL history.

It was the fourth time in six games this season that the Jaguars have given up a touchdown on an opponent’s first possession.

Star receiver Odell Beckham Jr. is active and expected to be available when the surprising Cleveland Browns travel to face the Pittsburgh Steelers on Sunday.

Beckham Jr. had his second negative COVID-19 test in 24 hours on Saturday, clearing him to rejoin his teammates. The receiver was kept away from Cleveland’s facility and didn’t practice for two days after feeling ill on Thursday and being sent home.

The league has instructed teams to remove anyone showing symptoms similar to COVID-19 even if they are caused by a cold or the flu. The Browns are off to a 4-1 start and trying to earn their first win in Pittsburgh since 2003. The Steelers (4-0) are one of four undefeated teams remaining in the league.

Beckham has had a good start in his second season with the Browns, who acquired the star in a blockbuster trade with the New York Giants. He has 21 catches for 294 yards and three touchdowns and also had an electrifying 50-yard TD run that sealed a win in Dallas. 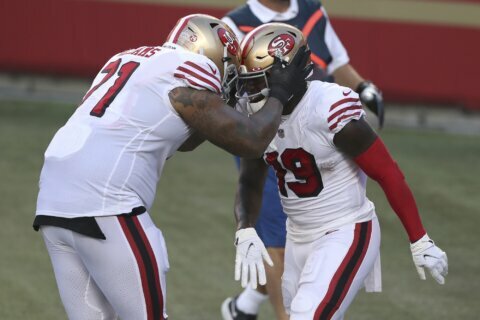 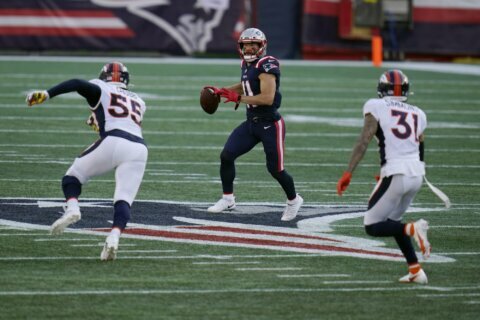 Patriots focus on offensive adjustments with 49ers up next 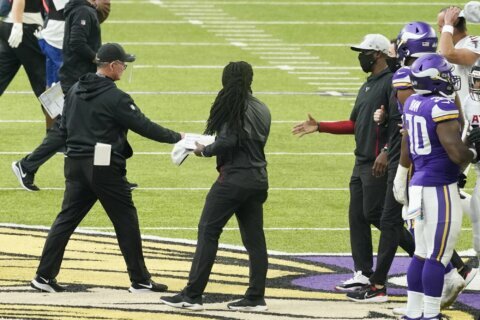 Falcons’ Morris doesn’t look at himself as an interim coach