STREAKS, STATS AND NOTES — With this game rescheduled from Oct. 4, it will be the fifth game in NFL history between two undefeated teams in Week 7 or later, excluding strike seasons, and the winner of each of the previous four made the Super Bowl that season. Titans coach Mike Vrabel played and won two of those games with the Patriots. … Both teams took their byes in Week 4, pushing Pittsburgh’s game with Baltimore to Nov. 1. … The Steelers and Titans are two of the NFL’s three remaining undefeated teams. Seattle is the other … The Steelers are off to their best start since 1978 when they won their first seven on the way to winning the Super Bowl. The Titans are 5-0 for only the second time in franchise history and first since winning their first 10 games to start the 2008 season. … Pittsburgh ranks fourth in scoring (31.2 points per game). The team has scored 26 or more points in each of its five games for the first time in franchise’s 87-year history. … Steelers RB James Conner ran for 101 yards and a TD last week, his third such game this season. The Steelers are 8-0-1 in Conner’s career when he tops the century mark on the ground. … RG David DeCastro (abdomen) and WR Diontae Johnson (back) are expected to play after sitting out the win over the Browns. … Pittsburgh’s defense ranks in the top three in 24 categories, including sacks (first), tackles for loss (first) and yards allowed (second). … Steelers QB Ben Roethlisberger needs one win to become the fifth QB in league history with 150 career victories. Roethlisberger is 5-3 all-time against the Titans. … Steelers WR Chase Claypool leads rookies with six TDs and is tied with four others for the most TDs by a receiver since 1970 in his first five career games. … The Titans have scored at least 31 points in four straight games. … They became the fourth team in NFL history to have a 300-yard passer, 200-yard rusher and 100-yard receiver last week. Ryan Tannehill (364) and Derrick Henry (212) became the first duo in NFL history to have a 350-yard passing performance and a 200-yard rushing total in the same game. … The Titans set a franchise record with 601 yards total offense last week, the highest single-game total in the NFL this season. … .This will be the 16th regular-season start for Tannehill since becoming the Titans’ starter, and he is 12-3 in his first 15 starts. … Fantasy tip: Henry is coming off his best game this season, leads the NFL with 588 yards rushing and has run for at least two TDs in four straight games. 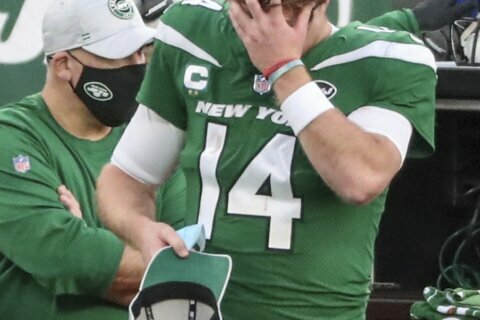 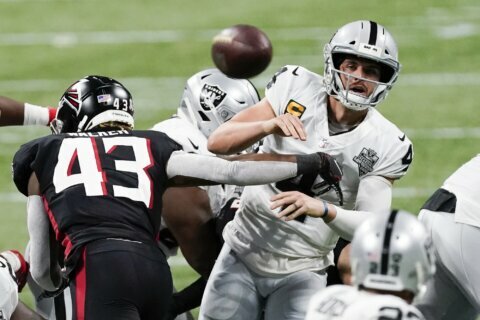 Gruden apologizes to ‘Raider nation’ after ugly loss in ATL