New England making errors of commission and omission on the field and on the sideline.

The Browns getting annihilated in Pittsburgh.

Well, scratch the third item as something unusual.

Football fans aren’t used to witnessing the great Packers quarterback, with a 10-0 lead no less, surrendering a Pick-6 and then another interception leading to a touchdown within three throws. Not only did those mistakes changed the tenor of Green Bay’s visit to Tampa Bay, it led to a Buccaneers-style pillaging for a 38-10 rout.

The game also displayed something no one had seen in the first month of Green Bay’s season. In going 4-0 before their bye, the Packers were the most fundamentally sound team in the NFL. On Sunday, they were a mess.

“You don’t ever want to lose like this,” Rodgers said. “I felt like we needed a little bit of a wakeup call at some point this season because things have been so good, and there’s been so much talk maybe outside the building about the ease with which we’re moving the ball on offense and scoring. I think we needed kind of a kick in the butt a little bit.”

Green Bay sustained some injuries that contributed to the poor performance, most notably outstanding left tackle David Bakhtiari leaving in the third quarter with a chest issue. By then, however, the outcome wasn’t in doubt.

“There’s a little bit of wakeup to stop feeling ourselves so much and get back to the things that got us to this position,” Rodgers said. “I think this would be, unfortunately but fortunately, something we can really grow from.”

The Patriots appeared to grow stale during their unexpected layoff forced by a mini-outbreak of COVID-19 within their ranks. They lost at Kansas City to start October, minus quarterback Cam Newton. He was back for this one following an adjusted bye week, and neither Newton nor the rest of the Patriots were in sync for much a home loss to Denver.

Indeed, even the coaching staff got caught snoozing. In the third quarter, a bad spot cost New England a first down and forced a punt from its goal line. They also missed a botched call in the loss to Kansas City and neglected to challenge.

How often has anyone seen the Patriots (2-3) lose when they don’t allow a touchdown? Six field goals did them in as the offense looked lost, receivers unable to get enough separation to help the rusty Newton.

“We’re expected to do our job and play at a high level and we didn’t do that today,” said Newton, well aware of three turnovers. “Anytime you turn the ball over that many times, the success rate is extremely low. But yet we still had that opportunity to win and we just got to find ways to do that.”

Cleveland hasn’t done that in decades; virtually never since the original Browns left for Baltimore in 1995 and the current franchise entered the NFL in 1999. With the Browns at 4-1, they headed to Pittsburgh steeled for the challenge, intent on showing they are a contender.

Impostors, it turns out. At least for now after being throttled for the 17th straight time at Heinz Field. In two meetings with AFC North powers Baltimore and Pittsburgh, the Browns have been outscored 76-13.

“We’re all very frustrated,” said quarterback Baker Mayfield, who finished 10 of 18 for 119 yards before he was pulled in the third quarter. “We don’t come out here just to get stats. We come out here to win. So it’s a frustrating loss for us knowing that we didn’t play well. We let a great team capitalize on all of our mistakes. We’re all frustrated.”

Not to mention humbled, just like the Packers and Patriots. And perhaps a little bit confused about who they really are. 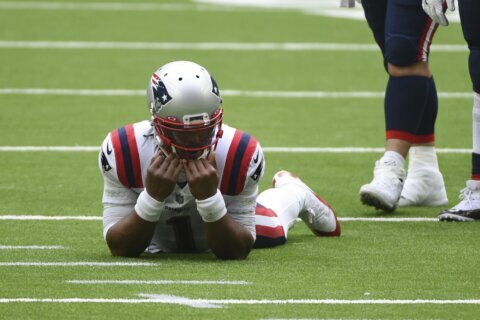