The NFL kicked off its 12th year of fighting cancer through its “Crucial Catch” program on Thursday.

The initiative addresses early detection, getting screened, and risk reduction efforts across multiple cancers. This year specifically, Crucial Catch will tie in to the league’s “It Takes All of Us” campaign, which highlights the importance of joining together to make a difference in the lives of others.

“Every year, we know how important our work with the American Cancer Society is to bring Crucial Catch to life on field and in our communities. Raising awareness of the importance of getting screened and raising much needed funding are more important this year than ever before,” said Melissa Schiller, director of community relations for the NFL. “We’re proud to work with the American Cancer Society to provide funding for CHANGE grants in underserved communities, which have already impacted over one million lives, and we look forward to continuing our work together.”

All 32 NFL teams have the option of supporting early detection and risk-reduction efforts for one or multiple cancers in their stadiums and in their communities. This month, players are allowed to wear cleats, shoelaces and wristbands in any color representing the type of cancer awareness they support or have been impacted by.

Also during October, game balls will carry the Crucial Catch logo; multi-colored equipment for players will included helmet decals, captains’ patches, wristbands, sideline caps and quarterback towels; multi-colored ribbon pins will be given to all teams; caps and pins for game officials; and many on-field displays.

Each of the players involved in this year’s Crucial Catch campaign have been personally impacted by cancer. Steelers running back James Conner is a cancer survivor who was diagnosed with Hodgkin’s lymphoma while in college, when doctors found tumors around his neck and chest.

Titans defensive back Johnathan Joseph lost his grandfather to cancer and his father passed away in 2014 after having emphysema that developed into lung cancer.

Vikings tight end Kyle Rudolph’s brother, Casey, was born with neuroblastoma, an aggressive cancer that affects babies. His brother was behind his motivation to build the ‘Kyle Rudolph End Zone’ at the University of Minnesota’s Masonic Children’s Hospital.

Bears defensive coordinator Chuck Pagano was diagnosed with leukemia in 2012, a few months into his new role as head coach of the Colts.

Along with those NFL representatives, the ACS has 35 NFL player ambassadors who will make virtual appearances with cancer patients, survivors and caretakers throughout the month of October and beyond.

The COVID-19 pandemic has had a devastating impact on cancer screening. Since March, Americans have been urged to delay routine cancer screenings, resulting in a screening rate drop between 86% and 94% for some cancers. The NFL and the ACS are allocating resources dedicated to safely restarting cancer screenings in communities with the most need.

“For the last 12 years, the American Cancer Society and the NFL have together been focused on providing resources and assistance to help ensure that more Americans have access to critical cancer screenings,” said Gary Reedy, CEO of the American Cancer Society. “Having the support and partnership of the NFL and its fans through Crucial Catch will undoubtedly lead to more lives saved.” 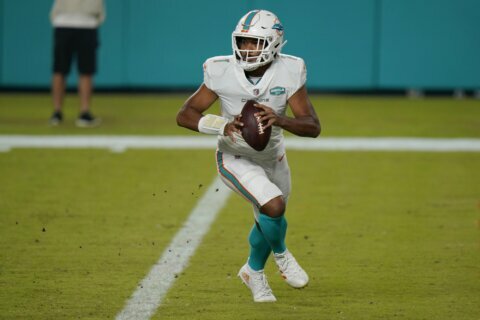