Nagy unloads on Bears’ offense after win over Brady, Bucs

It was an unusual tone for the usually upbeat Nagy. But he was clearly agitated a day after the Bears beat Tom Brady and the Buccaneers 20-19.

“The details right now in this offense are not there,” he said Friday. “So that’s our job as coaches to make sure that we get these freakin’ details right. It’s as simple as that.”

The Bears once again had to rally from a double-digit deficit, this time after falling behind 13-0 in the first half. They joined seven other NFL teams with three victories in the first five games after trailing by 10 or more, according to the Elias Sports Bureau.

Chicago also staged two big fourth-quarter rallies to win in Weeks 1 and 3, rallying from 17 down at Detroit and wiping out a 16-point deficit at Atlanta. In between, they nearly blew a 17-point lead against the New York Giants.

But while those three teams are a combined 1-11, beating Brady and the NFC South-leading Buccaneers at least lends the Bears some credibility. They just need to get more from the offense. And their coach is not happy.

“You need to do everything exactly the way it is supposed to be done,” Nagy said. “So if that means running a route at five steps and not three steps, or if that means running a route at three steps and not seven steps, that has to happen. If it means to set a certain way and block somebody, that’s what that means. If it means to throw on a certain time with your feet, do that. If it means to make the right play call at the right time, then do that as coaches. Meaning myself. And so we’re all in this thing together. But I refuse to allow this happen.”

Khalil Mack. The three-time All-Pro had two sacks to match his highest total since a Week 3 win at Washington last season. He went 17 games without two or more, his longest streak since he was drafted by Oakland in 2014.

Facing a dominant front for the second time in five days, the Bears again could not get their ground game going. They ran for 35 yards Thursday after managing 28 rushing in a loss to Indianapolis.

By comparison, they had 414 yards through the first three games. And that production in the run helped set up the play-action game.

Though the stakes were nowhere near as high this time, winning the rematch with Brady can only give Foles’ standing a boost.

The Super Bowl 52 MVP didn’t exactly put up eye-popping numbers in their first matchup since he led Philadelphia to a championship win over New England. He was 30 for 42 with 243 yards and a touchdown and an interception. But he made enough plays to help the Bears squeeze out another tight victory

The offense overall. It’s not hard to see why Nagy is frustrated. After all, the Bears are averaging 21 points and rank near the bottom of the league in total offense and rushing as well as yards per pass.

LG James Daniels was still being evaluated after leaving Thursday’s game with a pectoral injury, Nagy said. He was replaced by Alex Bars. Nagy also had no update on safeties Deon Bush and Sherrick McManis, who missed the game because of hamstring injuries, or kicker Eddy Pineiro (groin). He is on injured reserve and has not played this season.

0 — The Bears haven’t scored a point in the third quarter this season. And on two full possessions plus one that stretched into the fourth, the Bears managed just 39 yards. Chicago faced third-and-long situations on its first two drives of the quarter and was forced to punt.

The Bears visit Carolina on Oct. 18. 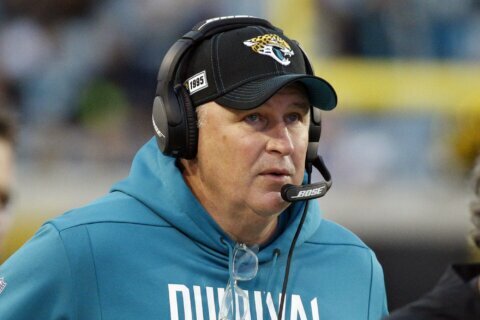 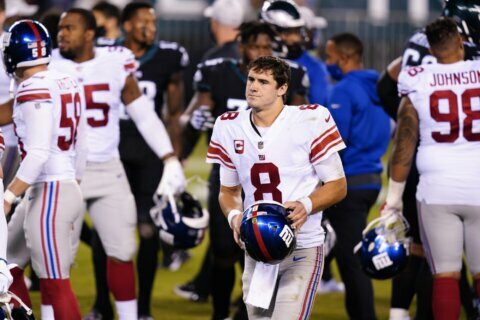