Lions, Patricia head into bye with urgent need to improve

DETROIT (AP) — The Detroit Lions have a lot of time to work on desperately needed improvements until playing again in nearly two weeks at Jacksonville.

The Lions are among the NFL teams with an early bye, idling them this week in the Motor City to practice and get tested for the coronavirus as part of the league’s protocol.

The break will give the players an opportunity to recover while coach Matt Patricia and his staff try to figure out how to possibly turn around the season.

For at least one veteran, Detroit’s bye is ill-timed.

“I want to go back out there and fix it,” safety Duron Harmon said Monday.

Clearly, there’s a lot to fix.

Detroit (1-3) built a two-touchdown lead in the opening minutes Sunday against New Orleans and collapsed on both sides of the ball as the Saints marched on offense, got stingy on defense and scored 35 straight points.

Under Patricia, the Lions have become the league’s first team to lose six straight games — dating to last season — in which they led by double digits.

Detroit is also one of two teams in NFL history, joining the 2011 Minnesota Vikings, to drop three of its first four games in a season after leading by at least 10 points in each setback.

Patricia’s job is in jeopardy as a first-time NFL head coach with 10-25-1 record in his third season. His predecessor, Jim Caldwell, went 36-28 with two playoff appearances in four seasons. Patricia was retained for 2020 after ownership made it clear that contending for the postseason was an expectation.

Patricia said he meets with team owner Sheila Ford Hamp each week, but declined to share much about their conversations.

“Those conversations are in house,” he said.

The Lions have scored first in each of their four games, including on the opening drive the past three weeks. Offensive coordinator Darrell Bevell appears to have the offense prepared to play each week, setting them up to start strong.

Run defense. While statistics early in the season can be misleading, there’s no doubt Detroit is one of the NFL’s worst teams against the run. The Lions are giving up 170 yards per game, 5.2 yards a carry and nearly 10 first downs per game on the ground.

That weakness has set up a lot of third-and-short situations for opponents, who have given up just five sacks against Detroit.

“If a team doesn’t have to pass, then you can’t get a pass-rush opportunity,” defensive end Trey Flowers said.

Romeo Okwara. The defensive end landed three hits on New Orleans’ Drew Brees and had a sack for the second straight week.

Marvin Jones. The return of standout receiver Kenny Golladay in Week 3 has not opened up opportunities for Jones, who was limited to one catch for 9 yards against the Saints and three receptions in the win at Arizona.

The Lions kept 30-year-old cornerback Desmond Trufant inactive for two games after he hurt his right hamstring in Week 1 before putting him back on the field against New Orleans. Apparently, that wasn’t enough time because he aggravated the injury in the third quarter Sunday. Defensive tackle Nick Williams also left the game with a shoulder injury.

Barring a turnaround, Hamp will have to decide if the time is now, or soon, to make big changes in the front office and on the sideline. 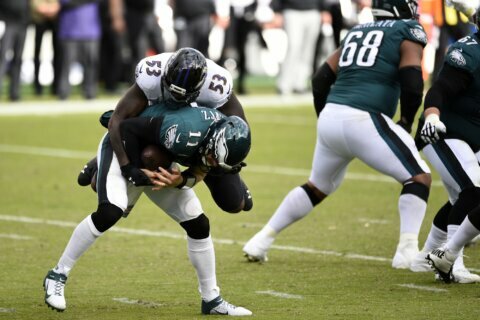