MINNEAPOLIS (AP) — With the Minnesota Vikings clutching a one-possession lead in their own territory early in the fourth quarter at Houston, Kirk Cousins sent a deep throw on third-and-6 toward the left sideline where rookie Justin Jefferson was running a fade route in tight coverage.

The ball was aimed at Jefferson’s back shoulder, an angle that’s practically interception-proof but consistently one of the most difficult to complete for even the most seasoned and talented quarterback-receiver tandems.

The lanky rookie from LSU turned his body at just the right time to secure the 25-yard catch and extend a drive the Vikings finished with a critical touchdown to fuel their first victory of the season.

Four games into his NFL career, after missing the typical spring practice time with his new team because of the COVID-19 pandemic, Jefferson made clear the Vikings made wise use of the 22nd overall pick in the draft.

“We don’t have that time or years banked. At some point, you’ve just got to play and believe he can do it,” said Cousins, who connected with Jefferson four times for 103 yards in the 31-23 win over the Texans on Sunday that improved the Vikings to 1-3.

Cousins added: “We’re going to build trust, but some of the things we’re doing, there is no trust. It’s just raw ability, and you’re putting the ball out there, hoping, believing that he’s going to be able to make it happen.”

After a quiet first two games for Jefferson mirrored a rough start for the offense, offensive coordinator Gary Kubiak and Cousins made a concerted effort to get Jefferson more involved. There’s no going back now with this budding star.

Against the Texans, Adam Thielen (114 receiving yards) and Dalvin Cook (130 rushing yards) gave the Vikings their first 100-yard trio in a game since Nov. 19, 2000, with Cris Carter, Randy Moss and Robert Smith. Jefferson is third in the league with an average of 21.8 yards per reception.

“I guess you could say this is my preseason,” Jefferson said, “and I’m just getting started.”

After Jefferson’s breakout 175-yard performance on Sept. 27 against Tennessee, Thielen saw a noticeable shift in coverage focus and strategy in Houston.

“They can’t really key in on one person. Otherwise it’s going to be a long day for someone else,” Thielen said, adding: “I think this league knows that he can make plays and that he’s the real deal.”

Cook was particularly successful running to the outside, as the Vikings pressed the edges of a Houston defense that ranks last in the NFL in rushing yards allowed. Cook matched his career high with 27 carries and had his sixth two-touchdown game.

The Vikings allowed a 300-yard passer for the first time this season. Cornerbacks Mike Hughes (neck) and Kris Boyd (hamstring) were on the inactive list at Houston, the second straight absence for Hughes. Jeff Gladney played every snap and Cameron Dantzler returned from a rib injury, taking all but two plays, as the Vikings in a rarity started a pair of rookies. Holton Hill played extensively, too, in his hometown, contributing a handful of key pass breakups.

Rookie D.J. Wonnum has been fourth in the defensive end rotation, behind Yannick Ngakoue, Ifeadi Odenigbo and Jalyn Holmes. He had his first NFL sack in Houston, taking down Deshaun Watson to force a first-quarter punt that set up Minnesota’s first touchdown drive.

Tight end Irv Smith Jr. has only two receptions for 14 yards through four games, with Thielen, Jefferson and Cook the focal points of the offense. Smith has seen plenty of action as a blocker, taking 143 of 237 possible snaps — more than 60%.

“There were some plays called for him,” Zimmer said, and sometimes they just get them played.”

The Vikings have four players on injured reserve: defensive end Danielle Hunter, linebackers Troy Dye and Anthony Barr and right guard Pat Elflein. Barr (pectoral) is done for the season, and Hunter (neck) might be headed that way after seeing a specialist in New York for a second opinion. Dye (ankle) and Elflein (thumb) have shorter-term injuries, but the Vikings have not indicated when they’re expected back.

6.42 — Yards per play for the Vikings, the fourth-highest rate in the NFL. They haven’t averaged more than 6 yards per play since 2004, the last full season for Moss in Minnesota. The previous time the Vikings ranked in the top 10 in the league in that category was 2007.

Continuing to receive favorable results from recent COVID-19 testing will lead the list of goals for the week. The Vikings appear to be in the clear eight days after playing the infected Titans, with no positives turning up, but constant vigilance is needed to stay ahead of and away from the virus.

Then there’s the matter of figuring out how to stop a six-game losing streak to the Seahawks, who are 4-0 for the first time since their Super Bowl-winning 2013 season. Four of Minnesota’s defeats have come under Zimmer, including December trips to deafening CenturyLink Field in each of the past two years. Russell Wilson already has 16 touchdown passes for Seattle, tied with Peyton Manning (2013) for the most in NFL history over the first four games of the season.

Browns look for rebound in rematch with improving Bengals 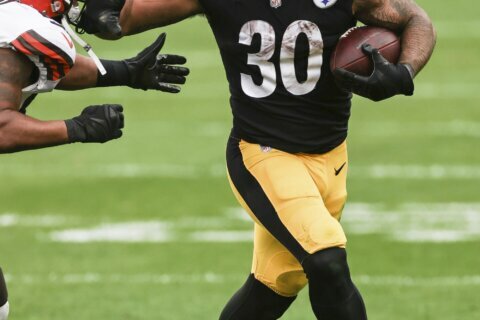