Jaguars go cross-country to face QB they should have drafted

JACKSONVILLE, Fla. (AP) — The Jacksonville Jaguars will travel cross-country this week and get a close-up look at the quarterback they could have — probably should have — drafted in April.

Justin Herbert has been beyond impressive since taking over for Tyrod Taylor, who was initially sidelined with a punctured lung in Week 2. Herbert has thrown for 1,195 yards, with nine touchdowns and three interceptions, in four starts for the Los Angeles Chargers (1-4).

It’s one of the best four-game stretches for a rookie quarterback in NFL history, right up there with Cam Newton (2011) and Andrew Luck (2012).

It’s also another gut punch for Jacksonville (1-5), which has failed repeatedly to find a franchise QB.

General manager Dave Caldwell and coach Doug Marrone rolled with Gardner Minshew this season, taking a risk on a popular player who showed promise as a rookie. But Minshew’s flaws have flashed in Year 2, leaving fans clamoring for Clemson star Trevor Lawrence.

Minshew’s numbers are respectable. He’s completed 67.5% of his passes for 1,682 yards, with 11 touchdowns and five interceptions.

But five of his eight TD passes since the opener have come with the Jaguars trailing by double digits. Throw in 17 sacks and three lost fumbles, and it’s clear to just about anyone watching that Jacksonville is right back where it’s been every year for the last two decades at the all-important position.

Minshew’s worst game of the season came Sunday in a 34-16 home loss to Detroit. He completed 25 of 44 passes for 243 yards, with a touchdown, an interception and a fumble. He also scrambled for a score. Both of his TDs came late, with Jacksonville trailing by 24 and 21 points, respectively.

Marrone said he didn’t consider benching Minshew but added that could be an option “maybe in the future.”

Arguments can be made that Minshew’s not getting enough help, whether it’s a lackluster running game, suspect protection or a defense that’s on pace to be the worst in franchise history.

The more likely conclusion: Minshew’s just another guy in a long list of them in Jacksonville. Byron Leftwich, David Garrard, Blaine Gabbert, Chad Henne, Blake Bortles and Nick Foles all floundered before him.

“I felt like, as receivers, we got open,” DJ Chark said Sunday.

The Jaguars could have made a move for Herbert. They had two first-round picks (Nos. 9 and 20) and enough capital (12 selections total) to trade into the top five. Herbert went sixth to the Chargers.

Instead, Jacksonville chose cornerback CJ Henderson and defensive end K’Lavon Chaisson. Henderson hasn’t made a memorable play since the opener, and Chaisson barely made the stat sheet despite starting the last two games.

For as bad as the Jags have been defensively, they at least are forcing turnovers. Linebacker Joe Schobert got his hands on a deflected ball Sunday for his first interception of the season. It came one week after safety Jarrod Wilson and cornerback Sidney Jones picked off passes by Deshaun Watson.

Everything, honestly. It starts with being able to run the ball to take pressure off Minshew and one of the league’s most porous defenses.

Keelan Cole was widely considered an afterthought coming into the season, an undrafted rookie in 2017 who was entering the final year of his contract and believed to be buried on the depth chart behind Chark, rookie Laviska Shenault, Chris Conley and Dede Westbrook.

He’s emerged as the team’s most consistent threat, now leading Jacksonville in receptions (27) and yards (362) and tied for the lead in touchdowns (3).

Pick a position, any position. Offense? Defense? Special teams? Coaches? There are simply too many options from which to choose.

9 — number of losses Jacksonville has in 12 games on the West Coast. All three wins came in Oakland. The Jaguars are 0-2 in San Francisco, 0-3 in Seattle, 0-4 in San Diego and 3-3 in Oakland — which no longer has a team, of course.

End a five-game losing streak in the team’s first trip to Los Angeles. 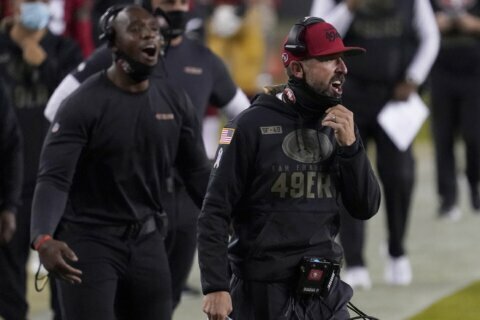 49ers getting injured players back, but dealing with COVID 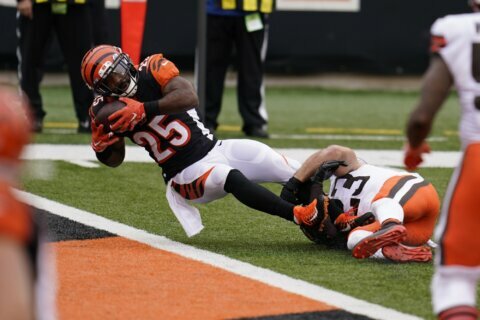 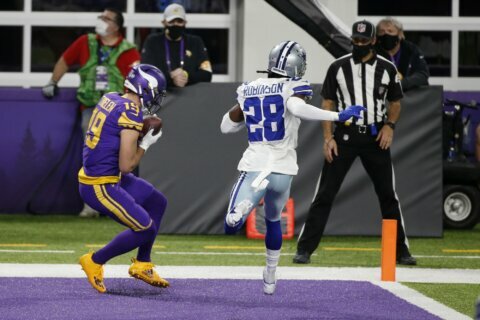