HOUSTON (AP) — J.J. Watt took responsibility for Houston’s overtime loss to Tennessee this weekend after the defense was unable to get a stop after Deshaun Watson put the Texans up late.

On Monday, interim coach Romeo Crennel said he appreciated Watt’s sentiment, but that the loss was not on him.

“I’m the head coach and the buck stops at my desk,” Crennel said. “So, I’m the reason that we ended up losing that game. That’s the way everybody’s going to look at it eventually down the road. If that were not the case, you would be talking to Bill O’Brien right now.”

Crennel led the Texans to their first win in Week 5 after taking over following O’Brien’s firing, but the veteran coach was unable to help them close out Sunday’s game and they fell to 1-5.

Houston led by a touchdown with less than two minutes left on Sunday before the defense allowed a TD pass by Ryan Tannehill with 4 seconds remaining to tie it before Derrick Henry took a direct snap 5 yards for a score in overtime to give the Titans the 42-36 victory.

Safety Justin Reid is trying to figure out why the defense performs well at times, but completely breaks down on some plays.

“We have the ability to make plays,” Reid said. “We just got to do it not some of the time (but) all the time. And that’s going to be the challenge that I’m going to put on myself and a lot of other guys in the locker room is to be consistent. Do it every play.”

Watson, top receiver Will Fuller and Houston’s new receivers continue to improve each week. Watson had his best game of the season on Sunday, completing 28 of 37 passes for 335 yards and a season-high four touchdowns. Fuller was his favorite option against the Titans, finishing with a season-best 123 yards and a TD for his third 100-yard game this year. Although he found Fuller a lot, Watson also spread the ball around, completing passes to seven different players and throwing each of his TD passes to a different guy.

The biggest factor in Houston’s loss to the Titans was the team’s inability to stop running back Derrick Henry. He ran for 212 yards, including a 94-yard TD and added 52 yards receiving. The Titans finished with 263 yards rushing, the most yards rushing the Texans have allowed this season. But Sunday was far from their first bad game against the run. They’ve allowed 162 yards or more on the ground in five of their six games and rank last in the NFL by giving up 177.5 yards a game.

Crennel said they had a meeting planned on Monday to try and find a way to improve in this area.

“We’ll see if we can come up with a better plan than what we have,” said Crennel, a former defensive coordinator. “Maybe we have to cut back on some of the things that we’re doing to keep the mental errors to a minimum. Then the physical part of it, I think we have guys who can play physical football. Sometimes we don’t always do it. But we have to focus on those two areas and see what we can come up with.”

TE Darren Fells set season highs with six receptions and 85 yards on Sunday after having just four receptions for 78 yards in his previous three games combined. He had a 1-yard touchdown reception on fourth down in the second quarter and his 35-yard reception in the third quarter helped set up another score.

RB David Johnson had another tough game this week after it seemed as if he turned a corner in a Week 5 win over Jacksonville when he had a season-high 96 yards rushing. Johnson has been unable to provide any consistency in the running game in his first season in Houston after being traded from Arizona for DeAndre Hopkins. He had just 57 yards rushing against the Titans to leave the Texans ranked 31st in the NFL in yards rushing with just 85.8 a game.

1 — Bradley Roby intercepted Tannehill in the fourth quarter on Sunday to give the Texans their first interception of the season. They were the last team in the NFL to get an interception this season.

The focus this week will be shoring up the run defense before the Packers visit on Sunday. It will be another big test for Houston since Green Bay ranks sixth in the NFL in yards rushing with 139.4 a game and Aaron Jones is tied for third in the NFL with five rushing touchdowns. He had a season-low 15 yards rushing on Sunday in a loss to Tampa Bay, but could still challenge Houston’s struggling run defense after running for a career-high 168 yards in Week 2. 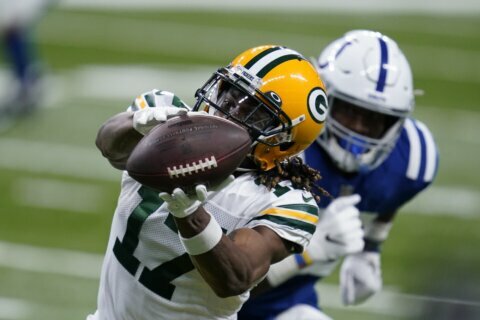