Chiefs grind out win over Bills before Bell’s arrival

KANSAS CITY, Mo. (AP) — The Kansas City Chiefs had one of their worst rushing performances in years against the Raiders, signed running back Le’Veon Bell midweek to help them out, then managed to put up some of the best rushing numbers ever for an Andy Reid-coached team before the two-time All-Pro stepped on the field.

Perhaps motivated by their lousy performance the previous week, or the impending arrival of Bell, the Chiefs ran 46 times for 245 yards in a 26-17 win over the Bills on Monday night.

The number of carries matched their most under Reid and the yardage total was the fifth most by any of Reid’s teams in Kansas City or Philadelphia.

“I didn’t think I gave the guys enough of a chance last week with it, especially in the second half,” Reid said. “You know, we’re best when we have some kind of a balance going. When you can go back and forth, it puts a tremendous amount of pressure on the defense. So, we were able to do both, and we felt like we needed both in this game.”

Clyde Edwards-Helaire did most of the work, running 26 times for 161 yards. It was the third-most yardage by a rookie in franchise history, trailing only Kareem Hunt’s 172 yards against the Chargers and Joe Delaney’s 193 yards against the Oilers.

“Obviously we had a few more pass played called — I mean, we always do — but once we saw how deep their linebackers, safeties and corners were playing, we knew that we had the run game,” said Mahomes, who still threw for 225 yards with a couple of touchdowns. “If teams are going to play us like this, you’re going to see us running the football.”

Especially with Bell due to arrive this week. He had to undergo a week’s worth of COVID-19 testing before he was cleared to join the Chiefs (5-1), but he should be on the field in some capacity for Sunday’s game at Denver.

“I can’t wait,” Bell tweeted during the game.

The Chiefs defense bounced back from a miserable performance against the Raiders’ Derek Carr to shut down Josh Allen, who was just 14 of 27 for 122 yards with two touchdowns and an interception.

The Chiefs still haven’t hit the deep throw that has made their offense so dangerous the past couple of years. Their longest throw was a 37-yard pass to Byron Pringle that picked up an important third down late in the game. But that isn’t necessarily their fault; defenses have been backing off the line of scrimmage to help deal with the Chiefs’ speed.

The Chiefs offensive line looked nothing like it did against the Raiders, when it was dominated all game by a four-man front. Daniel Kilgore replaced Austin Reiter at center, Mike Remmers kicked out to right tackle when Mitchell Schwartz could not go, and Nick Allegretti replaced the injured Kelechi Osemele at left guard.

“Those guys really took it personally upon themselves that the light boxes that we’d been facing and the pressure was given up last week,” Mahomes said, “and they took that personally this week and you saw it today.”

Harrison Butker has struggled since kicking multiple 50-yard field goals in a win over the Chargers. He hit both of his field-goal attempts against the Bills, but he also missed an extra point for the third time in four games.

Schwartz missed the game with a back injury. Defensive end Alex Okafor left with a strained hamstring.

16 — Mahomes broke the franchise record he shared with Elvis Grbac for consecutive games with a touchdown pass. Grbac did it in 15 straight games from November 1999 to November 2000.

The Chiefs visit the Broncos on Sunday before back-to-back home games against the Jets and Panthers heading into their bye. None of those three teams have a winning record. 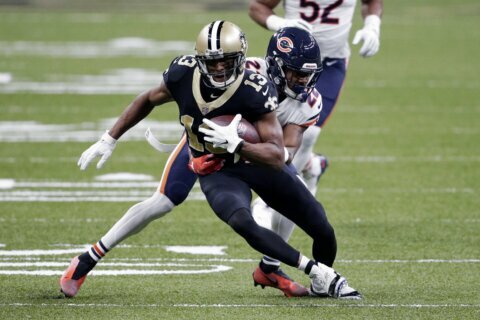