CHARLOTTE, N.C. (AP) — There was a time when doctors didn’t know if Teddy Bridgewater would walk normally again, let alone play play quarterback in the NFL.

Bridgewater also threw for 276 yards and two scores as the Panthers solved their red-zone issues from a week ago by scoring TDs on their first four trips inside the Arizona 20-yard line.

“I think the offensive staff has really homed in on, hey, what are the things that we really do well — and then (we focused) on really trying to do them well,” Panthers coach Matt Rhule said.

Bridgewater scored his first rushing touchdown since before a devastating knee injury in the summer of 2016; he tore his ACL and dislocated his kneecap with the Minnesota Vikings and had to be rushed to the hospital to prevent permanent nerve damage. On Sunday, the 27-year-old Bridgewater even looked elusive at times.

Bridgewater said he never thought of the past injury.

“I was just out there trying to score touchdowns in the red zone,” the quarterback said.

Rhule credited new offensive coordinator Joe Brady, whose play calls helped the Panthers control time of possession with scoring drives that lasted 13, nine, 10, eight and 15 plays, all the while keeping Kyler Murray and company off the field.

“We didn’t come in saying we wanted to keep the ball away from those guys,” Bridgewater said. “We came in with an aggressive mindset, but we just came away with winning the time of possession battle.”

Murray threw for three touchdowns for the Cardinals (2-2), but was limited to 133 yards passing as Arizona finished with 262 yards on offense, running just 55 plays.

DeAndre Hopkins, who came in averaging more than 10 catches and 118 yards receiving per game, was a nonfactor limited to 41 yards on seven receptions. He didn’t practice all week due to a foot injury.

The Panthers’ young pass rush kept Murray from taking shots downfield as rookie Yetur Gross-Matos set the tone with a sack-fumble early on.

“Some of those plays were designed for shots,” Murray said. “They were either covered or they forced me to tuck it down and run. If we had connected earlier in the game it would have been a different story. The offense starting slow put us in a hole. It was tough to catch up all day.”

Said Panthers DE Brian Burns: “We put emphasis on keeping eyes on (Murray). He had a nice run (for 48 yards), but he didn’t have a lot of them.”

Meanwhile, Bridgewater stayed clean all day, and completed 26 of 37 passes, most of those underneath coverage.

After the game, Bridgewater gave his offensive line the game ball.

“Teddy was able to sit back there and be comfortable in the pocket,” said wide receiver Robby Anderson, who finished with 99 yards receiving. “When you can have a long productive drive they are crucial.”

Things weren’t looking good for the Panthers after starting 0-2 and losing 2019 All-Pro running back Christian McCaffrey (ankle) for four to six weeks.

But Mike Davis has filled in nicely, finishing with 111 yards from scrimmage while scoring his second touchdown in as many weeks. Reggie Bonnafon chipped in with 53 yards rushing and caught a TD pass.

Cardinals coach Kliff Kingsbury wasn’t thrilled with his team’s energy level coming into the game, saying his team had a “bad performance.”

“We didn’t play well enough or coach well enough in any phase,” Kingsbury said. “They did. They played well and we didn’t match their intensity at the start coaching-wise, playing-wise.”

The Panthers were allowed to host up to 5,240 fans for Sunday’s game under new state guidelines set in place by Gov. Roy Cooper. The attendance announced was 5,120 in the first game fans were allowed to attend this season at Bank of America Stadium.

Bridgewater and two other Carolina players knelt during the playing of the national anthem while others held up their fists. The entire Cardinals team remained in the locker room for the anthem.

Cardinals: Running back Kenyon Drake left late in the fourth quarter after being shaken up on a run. It was the end of a disappointing day for Drake, held to 28 yards on 12 carries.

Panthers: Cornerback Eli Apple was ruled out after reinjuring his hamstring in the first half. Apple missed the first three games with a hamstring issue. … Greg Little started at left tackle after Russell Okung (groin) missed his second straight game.

Cardinals: travel to face the winless Jets (0-4) next Sunday.

Panthers: visit the Falcons in a divisional matchup next Sunday. 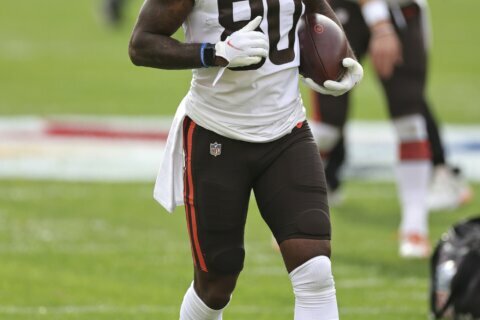