ORCHARD PARK, N.Y. (AP) — Safeties Micah Hyde and Jordan Poyer got in what they hope to be the last laugh on those questioning whether the Buffalo Bills defense had gone soft.

Asked whether a second-half stand in a 30-23 win at Las Vegas on Sunday was their attempt at making a statement, Hyde responded with sarcasm.

“Yeah, we didn’t want you guys talking about it, asking us questions about it,” he said of limiting the Raiders to a season-low 86 yards rushing.

Poyer, sitting next to Hyde on the postgame Zoom call, laughed, and added; “Yeah, that’s all you guys want to do.”

A sturdy one-half performance was impressive in which the Bills forced two fumbles, a punt and stuffed running back Josh Jacobs for no gain on fourth-and-1 at the Raiders 34 over four consecutive possessions. But it didn’t entirely erase concerns raised over the unit’s previous inconsistencies.

The Bills are off to their first 4-0 start in 12 years mostly because of a high-octane, Josh Allen-led offense overcoming various defensive lapses. Aside from scoring 123 points, the most by the Bills through the first four weeks of a season since scoring 133 in 2011, Allen has already produced two fourth-quarter comebacks after the defense relinquished second-half leads.

The defense made sure Allen didn’t need to make a third comeback by shutting the door after the Raiders cut the lead to 17-16 with a field goal to cap their opening drive of the third quarter. The field goal ended a run in which Buffalo allowed scoring drives on eight of nine possessions going back to the second half of a 35-32 win over the Rams, in which Los Angeles scored 29 consecutive points in the second half before allowing a late touchdown.

The punt Buffalo forced on Las Vegas’ next possession was the first by an opponent in nearly seven quarters.

The Bills then seized momentum when cornerback Josh Norman, in his Bills debut after missing three weeks with a hamstring injury, forced and recovered tight end Darren Waller’s fumble at the Buffalo 32.

It took four plays, including Allen’s 49-yard completion to Stefon Diggs, for Buffalo to boost its lead to 30-16 on Devin Singletary’s 2-yard run with 11:17 remaining.

Hyde, at the very least, acknowledged it was time for the Bills defense to carry its share of the load.

“Now you see our opponents out there and they’ve got to keep up with our offense. It’s on us to get stops,” Hyde said.

There’s still much to clean up for a defense that returned mostly intact a year after allowing the third-fewest yards in the NFL.

The Bills have given up 300 yards passing in three consecutive games, matching their worst stretch in three years.

Give it time, said defensive lineman Quinton Jefferson, who forced and recovered the other Raiders fumble in sacking Derek Carr at the Buffalo 39 with 5:21 remaining.

“It’s a long season. We’re just starting to mesh together,” Jefferson said. “It’s only going to go up.”

Ball distribution. Though Diggs led the team with six receptions for 115 yards, Allen completed passes to nine players, with Andre Roberts becoming the 12th Buffalo player to catch a pass this season.

Forcing three-and-outs. Buffalo opened the season by forcing five three-and-outs in a 27-17 win over the New York Jets. The defense has combined for just three in the past three outings.

Norman showed he’s not lost a step following four inconsistent seasons in Washington, where he failed to play to expectations which came with a five-year, $75 million contract. Cut by Washington in February, Norman signed a one-year contract with Buffalo, and reunited with coach Sean McDermott, his former defensive coordinator in Carolina.

Stepping in after Levi Wallace hurt his ankle, Norman finished with four tackles, including one for a loss, and a forced fumble.

Linebacker A.J. Klein was limited to playing eight defensive snaps and was overtaken by Tyrel Dodson, who played 19.

Coach Sean McDermott said starting LB Matt Milano is considered week to week with a pectoral injury. Milano missed Week 2 with a hamstring injury. Wallace is also considered week to week after hurting his left ankle in the first quarter. Allen did not miss a snap despite hurting his left (non-throwing) shoulder late in the first half. Receiver Cole Beasley returned despite saying he sprained his foot.

Bills catch a potential break with their next two opponents dealing with COVID-19 concerns. On Sunday, Buffalo is scheduled to travel to play a Tennessee Titans opponent which has missed a week of practice because of a coronavirus outbreak. After that, the Bills are scheduled host the Kansas City Chiefs in a Thursday night matchup on Oct. 15. Barring a schedule change, the Chiefs will be playing their third game in 11 days after positive tests pushed back their scheduled game against New England on Sunday to Monday night. 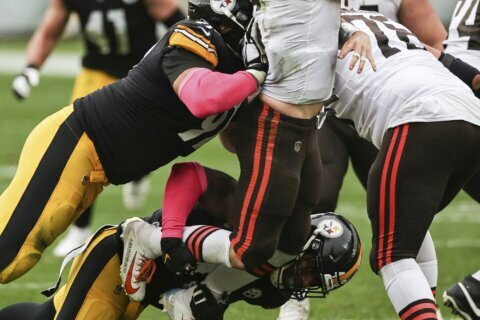 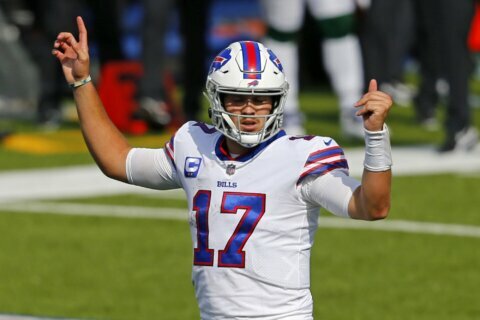