49ers go back to old formula to end skid

SANTA CLARA, Calif. (AP) — The formula the San Francisco 49ers used to get back on the winning track against the Los Angeles Rams was a familiar one.

Strong pass defense, a solid running game and a passing game that relied on quick passes and big plays after the catch.

It all added up to a 24-16 victory Sunday night against the Los Angeles Rams that snapped a two-game skid for San Francisco and was reminiscent of the style that took them to the Super Bowl last season.

“We’re definitely moving in the right direction” quarterback Jimmy Garoppolo said. “I wouldn’t say we’re totally there yet. There’s still a lot football left in the season, but how we finished this game, it felt a lot like last year, just how we were controlling the clock at the end of the game, running the ball, converting third downs. That’s when we really put teams away and that’s what we did tonight.”

Garoppolo threw three TD passes in the first half and finished with 268 yards passing a week after getting pulled at halftime of a 43-17 loss to Miami when he struggled for the Niners (3-3) on a bum ankle.

In all, 223 of those yards came after the catch as coach Kyle Shanahan schemed up big plays for Deebo Samuel and George Kittle that took pressure off Garoppolo.

The defense made that early lead stand up with Jason Verrett’s interception in the end zone on fourth down in the third quarter that helped preserve the lead.

Now the question for the Niners is whether they can keep this up during a difficult stretch that features games at New England and Seattle the next two weeks, before contests against Green Bay and New Orleans before a Week 11 bye.

“We see the potential of what this team can be,” guard Laken Tomlinson said. “It just takes everybody committing and working together and grinding through. It’s always the next-game mentality for the guys and that’s how we work. To see the results on the field, it’s very satisfying.”

Pass blocking. After allowing five sacks in back-to-back games for the first time in six seasons, the Niners line did a good job neutralizing Aaron Donald and the Rams fearsome pass rush. Quick passes helped the cause but the line also delivered, allowing no sacks and only five pressures, including a season-low two from Donald, according to Pro Football Focus.

Verrett. The oft-injured Verrett has been perhaps the biggest bright spot for the Niners. He has started four games in a row for the first time since 2016 and already has more defensive snaps this year than he had the previous three combined. But it’s more than just health. Verrett has been outstanding in coverage, allowing a passer rating of just 7.8 on passes thrown his direction this season, according to Pro Football Focus.

“I’m just happy to be out there and I love the game,” Verrett said. “This is what I worked for, to get back to this stage, and I just try to leave it all out there on the field.”

Run defense. The Rams were able to gash the Niners defense on the ground at times Sunday, gaining 113 yards on 19 carries. There were big holes in the middle of the defense, leading to an average of 5.95 yards per carry, the fourth worst since Shanahan arrived in 2017.

RB Raheem Mostert had a high ankle sprain and will likely go on injured reserve. … C Ben Garland also is headed to injured reserve with a calf injury. … S Jaquiski Tartt (groin) and LT Trent Williams (ankle) will be re-evaluated later this week.

Minus-32. Samuel caught all six of his receptions behind the line of scrimmage in what were essentially run plays with a forward handoff. He had minus-32 air yards on the catches, nearly twice as many as any wide receiver since 2016, according to NextGen stats. But he also had 98 yards after the catch, the most in any game for a wideout this season.

The Niners visit New England on Sunday in Garoppolo’s first game against the Patriots since being traded to San Francisco in 2017. 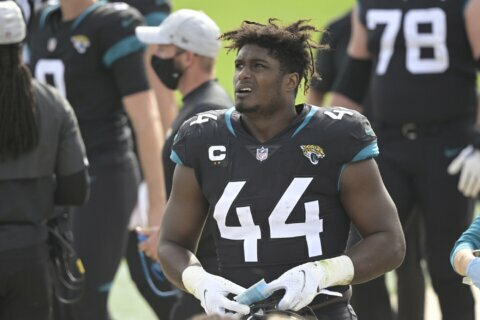 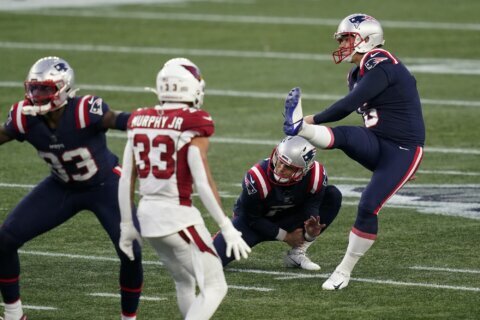