STREAKS, STATS AND NOTES — Tennessee’s only win in six matchups with Minnesota since the franchise moved from Houston in 1997 came in Nashville in 2008. … The Vikings are 7-1 at home in the series, with the only loss coming to the Oilers at the Metrodome in 1992. They beat the Titans there in 2001, 2004 and 2012. … The Titans are 2-0 for the first time since 2008, when they won their first 10 games. They beat the Vikings in Week 4 that year. … Titans QB Ryan Tannehill, who led the NFL in passer rating in 2019, posted a 145.7 passer rating against the Jaguars. That was the second-highest mark of his career and seventh best in franchise history. … Titans RB Derrick Henry, the NFL rushing leader in 2019 with 1,540 yards, ranks second in the league with 200 yards. He has a league-high 56 carries, four more than Josh Jacobs of the Raiders. … The Vikings are 0-2 for the first time in seven seasons under head coach Mike Zimmer. They went 0-3 in 2013 on the way to a 1-7 start under head coach Leslie Frazier. … The Vikings have been outscored 37-13 in the first half. They’re last in the league in time of possession with an average of 20:10 per game. … Vikings QB Kirk Cousins, who was fourth in the NFL in passer rating last season at a career-best 107.4, is currently last in the league with a 61.9 mark. … Fantasy tip: Titans TE Jonnu Smith had a career-high 84 yards receiving against the Jaguars and has three TDs, tied with Tyler Higbee of the Rams for the most among NFL tight ends. The Vikings are missing four-time Pro Bowl LB Anthony Barr, who suffered a season-ending injury to his right pectoral muscle last week. 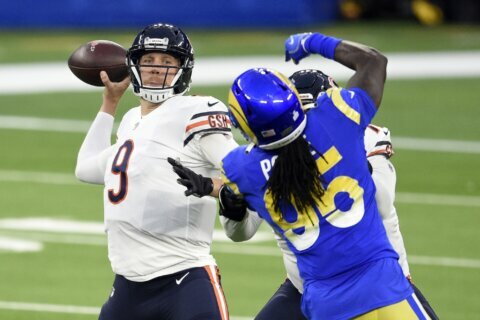