It was a rough day for some of the NFL’s under-fire quarterbacks.

Wentz threw two more picks but used his legs on a game-tying touchdown drive as the Philadelphia Eagles played the Cincinnati Bengals to a 23-23 tie Sunday.

Wentz is going through the worst stretch of his five-year career and has already tossed six interceptions, one fewer than he had in each of the past three seasons. Already missing veteran receiver Alshon Jeffery and rookie first-round pick Jalen Reagor, Wentz lost DeSean Jackson in the first half and tight end Dallas Goedert went down in the first quarter.

The combination of injuries on the offensive line and the skill positions, questionable playcalling and a predictable offensive scheme, plus his own inconsistency, has led to Wentz’s struggles.

“It’s hard when you got some moving pieces and you got different guys in there,” Eagles coach Doug Pederson said. “We’re not going to make excuses for anything. We got to continue to work, practice, get better and sort these things out. When the injuries piled up, it just sort of got us a little bit out of our game-plan rhythm.”

No surprise fickle fans are putting all the blame on Wentz. Those who aren’t still lamenting the fact the Eagles let Nick Foles go two years ago are calling for backup Jalen Hurts, the rookie quarterback who ran for 8 yards on one play of the two plays he was behind center with Wentz split wide.

“He battled. He was tough. He had some tough runs. He had the scramble for the touchdown. He played physical,” Pederson said of Wentz.

Tough usually wins over Philly. Apparently, that doesn’t apply to a franchise quarterback who lowered his shoulder and barreled into defenders when nothing else seemed to work.

Cousins threw three TD passes in Minnesota’s 31-30 home loss to Tennessee but also had two picks and has already matched his 2019 interception total with six. He was coming off the worst performance of his career last week and criticism is building as the Vikings fell to 0-3.

“You just go back and look at each one and say why and better understand each one,” Cousins said of his picks. “You try not to play for stats when they are just stats and not telling the full story.”

At least Cousins doesn’t have to look over his shoulder. Sean Mannion is Minnesota’s backup and he’s only thrown 74 passes in six seasons.

Trubisky, who beat out Foles for the starting job in Chicago after the Bears declined his fifth year contract option, was pulled in the third quarter following an erratic effort against Atlanta. Then Foles stepped in and tossed for three TDs in the final seven minutes to help the Bears overcome a 16-point deficit in a 30-26 win over Atlanta.

Bears coach Matt Nagy hasn’t yet committed to starting Foles next week. But it would be a shocker if Chicago (3-0) doesn’t stick with Foles, the former Super Bowl MVP and Philadelphia legend.

His teammates were impressed.

“His execution and really taking over the kills and the calls was pretty special,” tight end Jimmy Graham said of Foles. “He was out there ad-libbing a bit for sure and checking and changing some plays. There’s one play called, I’m like, ‘We got that?’ So it was pretty cool to see and pretty cool to be a part of.”

Haskins, Washington’s first-round pick in 2019, showed his potential in the first two games before reverting to bad habits in a 34-20 loss at the Cleveland. Haskins threw three interceptions and fumbled on a strip sack.

“I told him, look, I’m behind you,” Rivera said. “I’m going to stick with you, so you go out and play football. He has to understand you don’t have to make the big play all the time. Plus you have guys who can make plays. You need to get the ball in their hands and let them go out and make plays.” 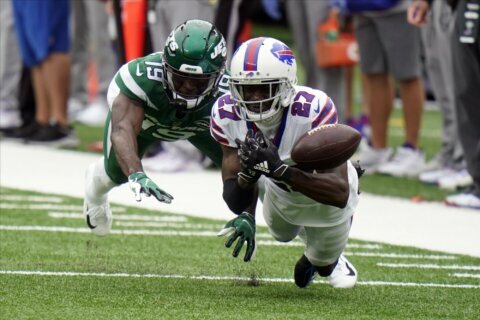 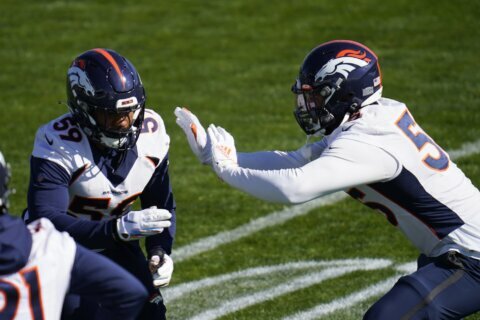