STREAKS, STATS AND NOTES – The Raiders won the past meeting between the teams when Derek Carr completed a 2-point conversion with less than a minute to play in the 2016 season opener. … The Saints have won their past three road games in the series since falling 24-19 in Los Angeles in 1994. … Saints coach Sean Payton’s first NFL job was with the Eagles in 1997 on a staff that included Raiders coach Jon Gruden. … New Orleans QB Drew Brees has a 108.6 passer rating in 11 career starts against the Raiders. That’s the highest of any QB with at least five starts vs. the Raiders. … Brees has thrown 20 TD passes against the Raiders since his last INT in 2003. … Brees’ 160 yards passing in the opener were the third fewest he has had in a win since joining New Orleans in 2006. … Saints RB Alvin Kamara had two TDs in the opener for his 14th multi-touchdown game since entering the league in 2017, the second most in the NFL in that span. … New Orleans has gone 44 straight games in the regular season and playoffs without allowing a player to rush for at least 100 yards. The last to do it was Washington’s Samaje Perine on Nov. 19, 2017. … Saints RB Latavius Murray played for Raiders from 2014-2016, rushing for 2,278 yards and 20 TDs, including career-best 1,066 rush yards in 2015. … Saints 2019 All-Pro WR Michael Thomas was injured last week, casting doubt on his availability for next few games. … New Orleans DE Cameron Jordan has at least one sack in previous six road games. … The Raiders are set to play first game in their new home in Las Vegas. … Carr had his 19th career fourth-quarter comeback last week. … The Raiders are looking to start the season 2-0 for the second time in the past 18 years. They did it in 2017 when they finished 6-10. … The Raiders averaged 3.78 points per drive in the season opener, their best mark in the past 11 seasons. … Las Vegas scored at least 30 points, committed no turnovers and had fewer than five penalties in a game for the third time since the merger in the season opener. … Las Vegas WR Henry Ruggs III had three catches for 55 yards in his NFL debut. That’s the second-most yards receiving for a Raiders player in his debut in the past 27 seasons, trailing only Louis Murphy’s 87 in 2009. … Fantasy tip: Las Vegas RB Josh Jacobs got a heavy load in the opener with a career-high six targets and 25 carries. He finished with 89 yards rushing, four catches for 46 yards and three TDs and should be the focus of the offense once again. 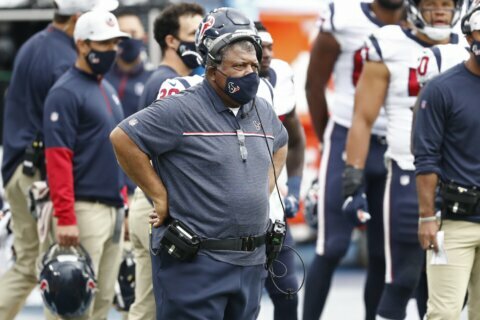