NEW YORK (AP) — The New York Jets are banged up and begging for answers to turn around a season that is already spiraling after just three games.

They’re 0-3 and somehow it feels even worse.

The heat on coach Adam Gase’s hot seat is at a full blaze, and the questions about whether Sam Darnold is truly a franchise quarterback persist. The Jets haven’t been particularly competitive in any of the losses, and now have a short week before a home game against Denver on Thursday night.

Some are speculating Gase could be gone by the end of the week if the Jets have another poor performance.

“This is the NFL,” Gase said Monday. “We’re 0-3. We haven’t played well. We have to improve quickly. My job is to do everything I can to get our guys in the right head space.”

That might be easier said than done, though. Especially with the pressure building from frustrated fans who are clamoring for the Jets to make a coaching change.

Right guard Greg Van Roten was in Carolina last season when the Panthers fired Ron Rivera. He’s not sure — as much as some want to see it — that getting rid of Gase right now will accomplish much.

“You go further in the tank,” Van Roten said. “So I’m not really sure what that solves. But I get the frustration. I understand that. No one outside of our facility believes in us right now, and it’s just kind of how things are going. So we need to rally together as a team and start getting things on track.”

Gase said he regularly meets with CEO Christopher Johnson, along with general manager Joe Douglas — and it was business as usual Monday as they approached the short workweek.

How Darnold bounces back from a lousy outing in Indianapolis will be crucial. The third-year QB threw three interceptions, including two that were returned for touchdowns in the 36-7 rout. Gase suggested the first one — returned for a score by Xavier Rhodes — was a result of rookie wide receiver Lawrence Cager not running a clean route.

But the other two were on Darnold, who feels as though he’s letting the team down a bit.

“Me having two pick-6s or having any interceptions is unacceptable,” Darnold said. “So to that extent, yes, but for me, I’m really looking forward to just continuing to get back to work with these guys. …

It’s tough to find any positives when the team is in such disarray with no wins and a coach and quarterback both taking a lot of criticism. Too many injuries and mistakes. It’s ugly to watch right now.

Gregg Williams’ defense has been porous, allowing chunk plays on a regular basis with busted coverages and way too many missed tackles. Also, the Jets are generating very little pass rush, giving quarterbacks plenty of time to make plays. It was expected that the trade of safety Jamal Adams to Seattle and the opt out of linebacker C.J. Mosley would have a strong effect on the defense. But Williams’ unit is being pushed around this season.

“Guys aren’t quitting,” safety Bradley McDougald insisted. “Guys are in here, guys are motivated. Guys are asking what more they can do, trying to figure out what more can they do to turn this thing around.”

Braxton Berrios. With the rash of injuries at the wide receiver spot, Berrios has stepped up as one of few reliable targets for Darnold. Berrios had four catches for 64 yards and a touchdown against the Colts, the second straight game he scored. He is tied with tight end Chris Herndon for the team lead this season with 10 receptions.

Ryan Griffin. The veteran tight end has no catches in three games after getting a three-year contract extension late last season worth $10.8 million with $4 million guaranteed. Griffin hadn’t even been targeted this season until Sunday, when he had two passes come his way — and dropped one on a third-down play.

Gase said the MRI on rookie LT Mekhi Becton came back better than the Jets initially thought, and there’s a chance he could play Thursday night. LB Jordan Jenkins (shoulder) is day to day. WR Jamison Crowder (hamstring) will go through walkthroughs and might be able to play after missing two games. WR Breshad Perriman (ankle) remains out, while RT George Fant and CB Quincy Wilson are still in the concussion protocol. Rookie S Ashtyn Davis is still nursing a groin injury. DL/LB Jordan Willis (ankle) is unlikely to play.

37 — That’s how many points the Jets have scored through three games, the fewest in the NFL and a big reason they haven’t held a lead at any point this season.

The Jets have a chance to make some dubious team history. If they lose Thursday night to the Broncos, it will mark the first time they will have consecutive 0-4 starts. And that won’t bode well for Gase’s long-term future with the team.

“Every game is a must-win,” linebacker Avery Williamson said. “We don’t want to go 0-4.” 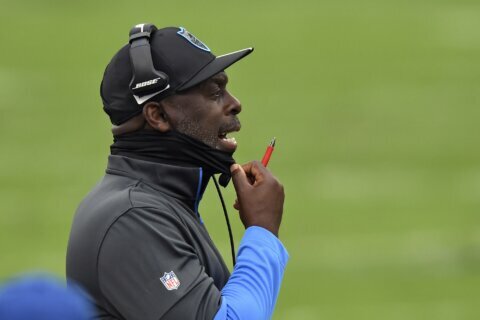 Chargers rested but still banged up coming off bye week