Playing for a team other than the New England Patriots for the first time since entering the NFL in 2006…
Listen now to WTOP News WTOP.com | Alexa | Google Home | WTOP App | 103.5 FM

Playing for a team other than the New England Patriots for the first time since entering the NFL in 2006 definitely feels a bit odd for kicker Stephen Gostkowski.

Coming off season-ending hip surgery, he weighed whether he wanted to keep playing and head to another team. The chance to play for former teammate Mike Vrabel in Tennessee was an opportunity he just couldn’t pass up.

“It feels weird, but it also feels … it’s kind of a cool feeling, like a fresh start, start over,” Gostkowski said.

“I feel like a rookie again. I got to meet everybody. I got to find out where I fit in on this team. I got to prove myself to this team. Whatever I’ve done or haven’t done in the past really doesn’t mean anything for this team. Maybe some of the young guys say, ‘I used to play with you on Madden.’ But other than that, I’m excited to go out there and have to prove myself to these guys and prove that I’m worthy to be a Titans.”

Vrabel was one of the veterans who was really tough on Gostkowski as a rookie in New England, where they were teammates for three seasons. Gostkowski won three Super Bowls with the Patriots and has made 87.4% of his kicks (374 of 428) in his career. His field goal percentage ranks fifth in NFL history.

But Gostkowski was put on injured reserve last October and had hip surgery before being released by the Patriots in late March. Gostkowski, who turned 36 in January, moved with his family to Tennessee this summer, buying a house near Franklin, Tennessee. Gostkowski played in college at Memphis, and his wife is a native of Memphis.

He kept kicking and waiting to see if anyone would call. The Titans did and liked his workout enough to make him their seventh kicker since the start of last season. They also kept undrafted rookie Tucker McCann on the practice squad, protected in case they need him after Tennessee converted a league-worst 8 of 18 field goals (44.4%) last season.

“This isn’t a lifetime achievement award,” Vrabel said of the decision to sign Gostkowski.

Asked about his leg strength, Gostkowski sounds ready to show what he can do in a new uniform.

“I feel like I’ve gotten my strength back, so I guess you’ll just have to wait to see how far I kick the kickoffs in Denver,” Gostkowski said of the Titans’ opening opponent Monday night.

ADDING A ‘C’ TO BURROW

Joe Burrow was picked as one of the Bengals’ captains even before he took a snap.

It’s unusual for a rookie to be picked as a captain, an honorary role that usually goes to veterans who have been around the team a long time. The players’ vote shows how the quarterback who has yet to take a snap in an NFL game is already considered a leader.

“It was one of my goals coming in,” said Burrow, the Heisman Trophy winner who was a captain last season on LSU’s national championship team. “I really didn’t expect to be a captain, but I couldn’t be happier to represent our team and our offense. We have a lot of guys that could have been up there, but I’m really happy my team decided I should be the one to get that honor.”

Veterans had no hesitation voting for Burrow, who could represent the Bengals at midfield for the pregame coin toss before the season opener Sunday at Paul Brown Stadium against the Chargers.

“I love the guy, love him,” fifth-year cornerback Mackensie Alexander said. “I love watching him play, watching him compete against us and stuff. He’s done really well.”

TAKING IN THE GAME

With crowds at Miami Dolphins games limited to 13,000 because of the coronavirus, fans this season can watch in the plaza outside the stadium from the comfort of their own beanbag.

A theater in the plaza will also include cabana shells, living room boxes, a sports bar and a cafe. Fans must observe social distancing guidelines.

The Dolphins are also offering a pass to season ticket holders that will provide access to a screen providing a game-day show, trivia, giveaways, stats and team content. The goal is to simulate in-stadium entertainment wherever a fan might be.

HOORAY FOR THE IVY

Six alumni of the Harvard football team made active NFL rosters. That’s the most for the Ivy League and tied for second most of any FCS schools.

Dolphins quarterback Ryan Fitzpatrick, tight ends Cameron Brate of the Buccaneers and Anthony Firkser of the Titans, center Nick Easton of the Saints, fullback Kyle Juszczyk of the 49ers and long snapper Tyler Ott of the Seahawks make up the Crimson Six.

Fitzpatrick, of course, is the most accomplished of the six. A 2005 graduate of Harvard, he enters his 16th season in the NFL as Miami’s starting QB. “Fitzmagic” is the only player in NFL history to have thrown a touchdown pass for eight teams. 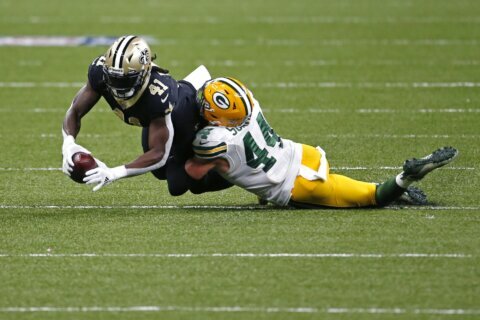