STREAKS, STATS AND NOTES — The Chiefs won last January in a divisional playoff game on the way to their first Super Bowl championship in 50 years. The Chiefs rallied from a 24-0 deficit in that game. … The Chiefs will allow 22% of capacity (about 17,000 fans) into Arrowhead Stadium under COVID-19 restrictions. … Only twice since 2002 have the road teams beaten the defending Super Bowl champions in the season opener: 2012 and 2017. … Houston has not won a season opener since beating the Bears 23-14 on Sept. 11, 2016. … The Texans have won three straight games played on Thursday night. … Houston would become the first team since Denver in 2014 and 2015 to beat the Chiefs in consecutive seasons on the road. … Texans QB Deshaun Watson needs 284 yards passing to become the seventh player in NFL history with 10,000 yards in his first 39 games. Watson is the first player in NFL history with at least 25 touchdowns passing and five rushing in consecutive seasons. … DE J.J. Watt needs two tackles to pass Jonathan Joseph (482) for fifth most in Texans history. … Watt has 96 sacks, tied for third most in NFL history through a player’s first 112 games. … Will Fuller V needs 38 yards receiving to pass Arian Foster (2,268) for fifth in Texans history. He needs two TDs receiving to tie Corey Bradford (18) for fifth. … Texans LB Benardrick McKinney needs 12 tackles to become the third-fastest player in NFL history with 500. … Kansas City enters the season riding a nine-game win streak. The club is aiming for its franchise-record third straight season of at least 12 wins. … The Chiefs have won four consecutive AFC West titles. … Chiefs coach Andy Reid has 222 wins. He needs eight to pass Curly Lambeau for fifth in NFL history. … Kansas City averaged 6.22 yards per play last season, second only to Dallas (6.46). … The Chiefs led the NFL in third-down conversion percentage last season (47.6). … Chiefs QB Patrick Mahomes needs 588 yards passing within the next four games to become fastest in NFL history to reach 10,000 for his career. Kurt Warner did it in 36 games. … Mahomes needs 24 TD passes in the next 12 games to become fastest to 100. Dan Marino reached the mark in 44 games. … TE Travis Kelce needs one more 100-yard receiving game to tie Otis Taylor (20) for second most in Chiefs history. Tony Gonzalez has 31 of them. … Kelce is trying to become the first TE in NFL history with five consecutive 1,000-yard seasons. He also needs 81 yards receiving to pass Henry Marshall (6,545) for fourth in franchise history. … Tommy Townsend will be the first rookie punter for the Chiefs since Dustin Colquitt in 2005. … Fantasy tip: Chiefs rookie Clyde Edwards-Helaire should be a fantasy star this season. Fellow running back Damien Williams opted out, leaving the first-round pick to take the majority of snaps in the backfield for one of the NFL’s most explosive offenses. 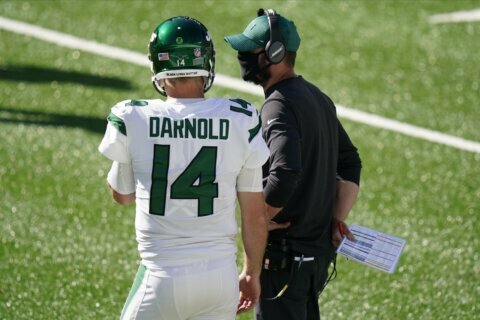 At 0-2, ’embarrassed’ Jets need to change things in a hurry 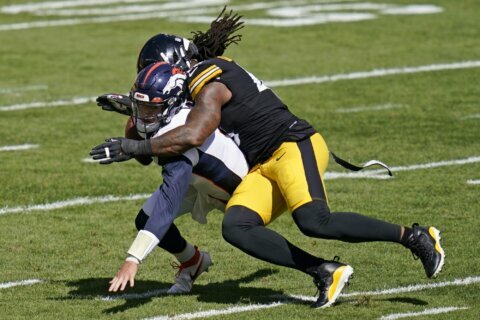 Here we go again? Lock, Broncos in a familiar spot

The Latest: Chiefs down few players while trailing Chargers