KANSAS CITY, Mo. (AP) — The Kansas City Chiefs raised some eyebrows during the NFL draft when they used their first-round pick on Clyde Edwards-Helaire, adding another potent weapon to their dynamic offense rather than filling a pressing need on defense.

Turns out that decision was downright brilliant.

With starter Damien Williams opting out due to the coronavirus pandemic, Edwards-Helaire shouldered a massive load with aplomb Thursday night. The slippery, pint-sized running back out of LSU carried 25 times for 138 yards with a touchdown in helping the Chiefs to a 34-20 victory over the Houston Texans in the opening game of the season.

“When we first ran out, just nerves at an all-time high,” Edwards-Helaire said, “but then you know, as time went on, we were just kind of on the field, my brothers, and they made me feel at home. Ultimately, the first carry, yeah, I kind of felt a lot of emotions. After I got tackled the first time, I got rolled up, I just knew it’s football. Time to roll.”

Roll he did. And so did the rest of the Super Bowl champions.

After spotting the Texans a touchdown lead, the Chiefs ripped off 31 straight points. They scored on each of their possessions in the second quarter, then added a touchdown to start the second half, burying the Texans — just as they did when the teams met in the divisional round of the playoffs in January.

The only real difference was that Edwards-Helaire — rather than Williams — was the one getting the carries.

“I mean, he’s been doing it since the day he got here,” said quarterback Patrick Mahomes, who threw three touchdown passes. “He’s going to keep getting better. It’s another weapon that I kind of have in this offense, and we’re going to keep doing whatever we can to keep moving the ball and scoring touchdowns.”

The Chiefs had a need at cornerback in the draft, and that became even more pressing Thursday night. Bashaud Breeland already was serving the first game of a four-game suspension, and fellow starter Charvarius Ward left with a hand fracture that left the team perilously thin in the defensive backfield.

Then again, Edwards-Helaire and the Chiefs’ offense might just be able to outscore anybody.

“This is a group that’s been together for a while now,” tight end Travis Kelce said. “ We know especially on the offensive side the intentions of the play caller. That’s the biggest thing, knowing what coach Reid and coach (Eric) Bieniemy are dialing up for us. You saw that today. It felt like we were in sync almost the whole game.”

The offense. The defense. The special teams. Just about everything was working for the Chiefs, even though they had no offseason or preseason games to iron out things. It helped that they returned most of their roster from last season, and the veterans in turn helped the newcomers and rookies learn the playbook and acclimate to the NFL.

If there was any letdown, it came when the Chiefs allowed two late touchdowns. The game was already decided by that point, but it left safety Tyrann Mathieu with a sour taste when he emerged from the postgame locker room.

“I’m (ticked) off. I felt like we played fairly decent up until probably that last couple series in the fourth quarter, we started giving up big plays, big chunks, things we weren’t doing earlier in the game,” Mathieu said. “If we held those guys to seven points, it would have been a much better feeling.”

L’Jarius Sneed made sure Edwards-Helaire wasn’t the only rookie with a starring role. The young cornerback was solid in coverage and picked off a jump ball thrown by Deshaun Watson, and his all-around performance should give the Chiefs a bit of confidence as they look toward a future without their top two cornerbacks.

Chiefs fans have long been considered among the best in the NFL, but they were widely criticized on social media when some of them booed during a pregame display of unity. To be fair, many of them were simply booing the Texans, who had just taken the field after remaining in the locker room for the national anthem. But it was nevertheless an ugly look when some of the booing continued into a moment of silence for social injustice.

In addition to Ward, defensive end Alex Okafor, who was part of an early sack, left with a slight hamstring injury, while defensive tackle Khalen Saunders left with a dislocated elbow that could keep him out for quite a while.

“It looks like it’s clean,” Reid said. “There doesn’t look like there’s any damage in there other than the dislocation, which isn’t great, but it’s better than the alternative.”

10 — The Chiefs ran their winning streak to double digits, including their Super Bowl triumph in February. Another win would match the franchise record for consecutive wins set during the 2015-16 season.

By playing in the NFL’s opener, the Chiefs now get a few extra days of rest before visiting the Chargers on Sept. 20. That is the first of back-to-back road games, with the second coming against the reigning AFC North champion Ravens. 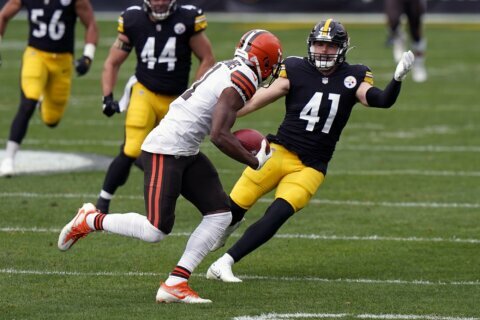