KANSAS CITY, Mo. (AP) — The Kansas City Chiefs threw the adage that defense wins championship on the ol’ barbecue and cooked it till charred last season, relying instead on their dynamic offense to win their first Super Bowl in 50 years.

They also leaned on it to win their season opener against Houston.

That game to kick off the NFL’s season on Thursday night, though, may have illustrated just how exceptional their offense can be.

When the Texans backed off the line of scrimmage to deal with the Chiefs’ speedy wide receivers, they simply ran at will with first-round pick Clyde Edwards-Helaire. When they packed the line of scrimmage, quarterback Patrick Mahomes could be seen smiling through his face mask while his vast array of playmakers shredded the secondary.

None of this is revolutionary. Teams have sought such offensive balance for decades. It’s just that the Chiefs have the talent and personnel to pull off the trick better than just about any NFL team in recent memory.

“What makes this offense so good,” Mahomes said, “is that we can change within games. We can go through our game plan and find ways to score and find ways to move the ball down the field, and (against Houston) it was running the football and taking the short passes. I think whenever we get to the Chargers next week, we’ll play another great defense, and we’ll have to find a way to move the ball and score that week as well.”

The balance the Chiefs showed is evident simply by looking at the box score.

Mahomes threw 32 passes downfield; the Chiefs ran the ball 34 times. He threw for 203 yards and three touchdowns; they ran for 166 yards and another score. They averaged 6.6 yards per completion; they averaged 4.9 yards per carry.

“They’ve been a man (defense) against us in the past,” Chiefs coach Andy Reid said of the Texans, “but they kind of mixed it up with a bunch of different coverages. Some of our underneath stuff was good. … Our whole receiving corps I thought did a really nice job. And Pat did a really nice job of checking it down.”

He also did a really nice job of finding the open target even when Houston managed to take somebody away.

The Texans started out by blanketing Tyreek Hill, and that opened things up for Sammy Watkins, who had seven catches for 82 yards and a score. When they shifted more attention to Watkins, the Chiefs started directing the ball to tight end Travis Kelce, who added six catches for 50 yards and a touchdown.

Oh, and lest you think Hill can be kept under wraps all game, he still finished with five catches for 46 yards and a score.

“We were rocking,” Kelce said with simplistic bravado. “We were out here rocking.”

They had better keep rolling, too. While the Chiefs played well defensively against Houston, a few injuries picked up during the game coupled with suspensions being served by cornerback Bashaud Breeland and defensive tackle Mike Pennel have left them short-handed when they visit Los Angeles this weekend to play the Chargers.

Defensive tackle Khalen Saunders dislocated his elbow and will be out awhile. Charvarius Ward fractured his hand, which means the Chiefs could be without their top two cornerbacks. Defensive end Alex Okafor left the game with what the team called a “slight hamstring” issue, but his injury history means the Chiefs will certainly take it slowly with him.

“Listen, I’m proud of our guys,” Reid said, “but we have a ton of things to work on, so that’s a plus. And these guys are willing to do that. They know that. And once they have a chance to look at the tape and see what they’ve got, they’ll hit the drawing board, as you’d say, and get busy working on those things.”

NOTES: C Austin Reiter is dealing with some knee soreness, Reid said Monday. … Despite having surgery, Ward has not been ruled out against the Chargers. “He had some work done on it and we’ll just see where he’s at when it’s game time,” Reid said. … S Juan Thornhill had no issues against Houston in his first game since tearing his ACL late last season. “He actually came out feeling good, which is what we wanted,” Reid said. “We were cautious with him. He wanted to play more, to his credit. It all worked out well, particularly the day after, which was important to us.” 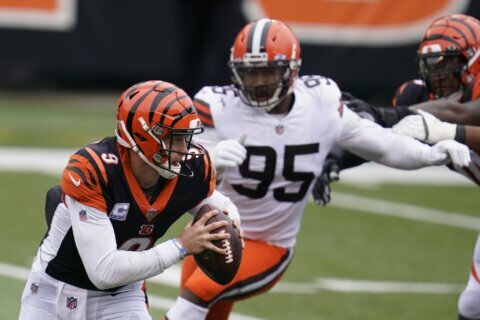 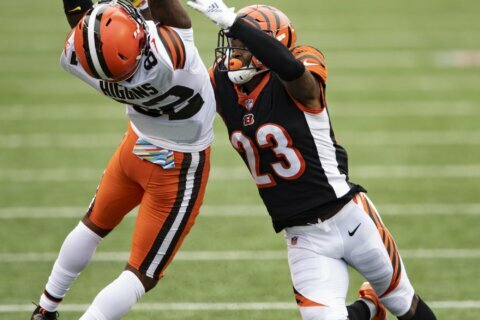