ENGLEWOOD, Colo. (AP) — The Denver Broncos on Wednesday placed injured linebacker Von Miller on injured reserve while he recovers from surgery to repair a dislodged tendon in his left ankle.

Miller got hurt on a freak play last week during an indoor practice. He’s expected to miss the season.

Bausby is a fifth-year player who played for the Broncos last season before suffering a concussion in his fifth game and going on IR in October. He didn’t make the 53-man roster coming out of camp this summer but starter A.J. Bouye sustained a shoulder injury in the opener and coach Vic Fangio said Bouye is expected to miss a couple of weeks.

Irving is a fourth-year pro from San Jose State who played in 33 career games with the Chicago Bears (2017-19), where Fangio was the defensive coordinator for his first two NFL seasons.

Fangio said wide receiver Courtland Sutton (shoulder), who missed the opener, will be limited at practice Wednesday and running back Phillip Lindsay (turf toe) is day to day. 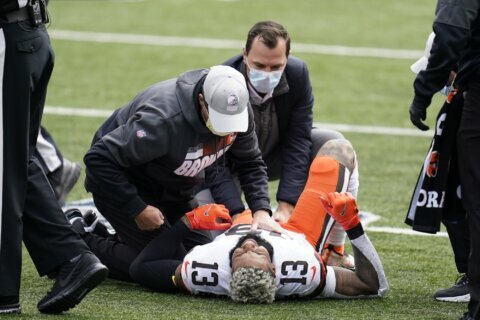