The Buffalo Bills cornerback was having difficulty comprehending the life-changing contract extension he signed two days earlier, and what it meant for him, his family and people back home in Shreveport, Louisiana, wondering if they could ever make it out of a poverty-stricken neighborhood.

The four-year, $70 million deal might make White, for however long, the NFL’s top-paid cornerback on an annual basis. And yet this went far beyond personal accomplishments, by inspiring White to think about his humble past.

The contract, which includes $55 million in guaranteed money and locks him up in Buffalo through 2025, is something he intends to share with his family.

“I was put in this position to spread the love, spread everything that I’ve been blessed with,” he added. “Once I told my dad and my mom (of the contract), it was a whole load that was lifted off my shoulders because I knew I could retire my parents. They’ll never have to worry about anything.”

Just as important, the contract extension validated a childhood dream of wanting to show how Shreveport doesn’t have to be a dead end. Drafted 27th overall in 2017 out of LSU, White arrived in Buffalo dreaming of returning home to one day become a sports administrator to motivate and inspire children.

Now he has the platform and resources to do even more.

“I want to show them that we didn’t have to go across the town or to another city to be successful,” he said.

“I wanted to show them that if you go to the neighborhood school and you have the right mindset you continue to be resilient that you can make it out of anything,” White added. “It’s so much bigger than just playing a game. I think that my whole mission was wanting to break the cycle about what kids thought and the mindset with it.”

White was at one point resigned to play college at nearby Grambling, before making the switch to quarterback in his junior year of high school, when he caught LSU’s attention. It’s at college where he started playing cornerback, and honed his craft going up against Odell Beckham Jr. and Jarvis Landry in practice.

On the field, the 25-year-old White has quickly established himself as one of the league’s up-and-coming defensive backs.

Last year, he had a career-high six interceptions, which finished tied for the league lead, and earned his first All-Pro selection. White did not give up a touchdown, and ranked second among defenders in limiting opposing quarterbacks to a 38.9 passer rating.

He’s most notably carved out a reputation of performing in the clutch.

Of White’s 17 career takeaways (including 12 interceptions), 14 have come in the second half, and 15 in Bills victories.

“He’s done a phenomenal job both on and off the field,” coach Sean McDermott said. “He brings a tremendous amount of energy to our team. He’s obviously well-liked in the locker room. So what more can I say about him in terms of the way he’s handled his first three years?”

White has become a fan favorite, and come to adopt the Buffalo as his home.

“Buffalo is right for me. This is the place for me. It’s a blue-collar town. I’m a blue-collar guy. I don’t need all the lights,” he said.

White has grown into a hockey fan, and playfully started a series of “mockumentaries,” last year about establishing The Tre’Davious White Goalie Academy, where he supposedly taught NHL Buffalo Sabres starter Carter Hutton all he knows. In one clip, White proudly says: “I’ve never allowed a goal.”

McDermott laughed wondering whether White should stick to his day job for now.

“I would like for him right now to focus on paying corner against the Jets,” McDermott said, referring to Buffalo’s season-opening opponent on Sunday. “Maybe we can have a deal to wait til February about his goalie academy.”

Not so fast, White said.

“I have a very, very, very diverse demographic that I’m entertaining that I have to keep happy,” White said. “Yeah, I’m going to keep that going.”

NOTES: GM Brandon Beane said RB Lamar Miller is scheduled for a visit after being cut by the New England Patriots on Saturday. Noting Miller missed all of last season with a knee injury, Beane termed the visit as being “exploratory,” adding “there’s a long way to go before we would add him to our roster.” … Beane said the team is holding off deciding whether rookie receiver Isaiah Hodgins will require surgery for a shoulder injury. Hodgins was hurt during training camp, and placed on IR Sunday. 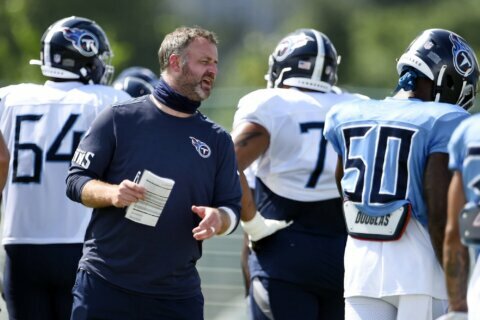 Titans without defensive play-caller due to COVID testing 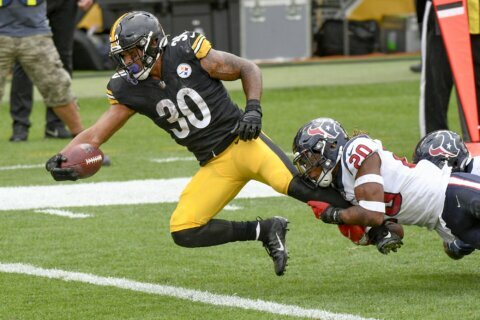 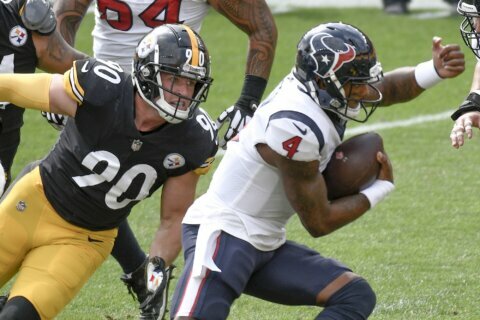