It’s going to be that kind of season. It already is. The perceived worst teams in the NFL either won…
Listen now to WTOP News WTOP.com | Alexa | Google Home | WTOP App | 103.5 FM

It’s going to be that kind of season.

The perceived worst teams in the NFL either won or challenged to on Sunday. A linebacker was ejected for demonstrating what happened on a play to a game official and making contact with him. A kicker cramped in his calf while attempting a potential tying field goal.

Detroit blew a big late lead — oh, wait, that happens all the time — to lose to Chicago. Indianapolis, which did not re-sign likely Hall of Fame placekicker Adam Vinatieri, was victimized by missed field goals against the Jaguars. And nothing bad happened to the Washington Football Team for once.

The lack of fans everywhere but Jacksonville due to the coronavirus pandemic was weird enough, particularly in normally raucous places such as New Orleans, Baltimore and Minnesota.

“It was one of the strangest experiences I’ve had in the NFL, being in a stadium like this to have memories of some really rocking times,” Aaron Rodgers said after throwing for 364 yards and four touchdowns — he threw for only three scores over his first four visits to U.S. Bank Stadium.

While Rodgers and the rest of the Packers were in Minneapolis, their radio broadcast crew did the game from Lambeau Field.

Rodgers, 36, hardly was the oldest quarterback in action. In fact, two 40-some codgers were on the same field, 43-year-old Tom Brady for Tampa Bay and 41-year-old Drew Brees in New Orleans. The top two statistical passers in several major categories — and pretty much in silence.

“It sort of felt like we were at a Tampa Bay game,” Saints defensive end Cam Jordan said, referring to where empty seats have become a tradition.

And this was only Week 1.

With no preseason games after a virtual offseason, sloppiness and unpredictability figured to be the norm. That was most true on defense, though seeing Rodgers, Russell Wilson and Lamar Jackson tear it up hardly is unusual.

Tackling has been most problematic, although the Rams and Cowboys sure got after each other in the debut of $5 billion SoFi Stadium. That defensive inconsistency won’t change perhaps until October, when teams have gotten in a fair share of hitting. By then, maybe Jacksonville, Washington, Carolina, Cincinnati will show us they really are the weaklings of pro football. Not now.

The Jaguars, seemingly eyeing only the future and high draft picks, knocked off Indianapolis. Washington, down 17-0, blitzed once-again injury-battered Philadelphia 27-17.

The Panthers fell to Las Vegas — oh yeah, there’s an NFL team now residing in the capital of gambling (Shhh! Don’t tell anyone) — but led in the final minutes and performed admirably in what has looked like a lost cause in Charlotte.

Cincinnati was in position to beat the Chargers, but veteran receiver A.J. Green pushed off on a go-ahead TD reception. Then Randy Bullock botched a short tying field goal when his leg gave out as he kicked.

“I guess that was surprising for everyone,” Bullock said.

Detroit’s Jamie Collins was the unfortunate LB who was kicked out of the loss to the Bears for having his helmet hit the chest of official Alex Kemp during his show-and-tell performance.

All of that weirdness stands out in mid-September. Considering the circumstances in 2020, of course, perhaps October through December won’t be much different.

Maybe what really should be remembered, though, is what occurred before the games.

There will be criticism aimed at the NFL for not having a big enough visual display of its social justice and racial equality initiatives — the fields didn’t look much different; the names of victims of racism and police brutality on the helmets were tiny; the end zone messages also were small. Probably the TV networks will be castigated for not presenting nearly enough detail on who was kneeling during the national anthem or making some other demonstration to support the causes. Quite a few announcers seemed to pay lip service to the pregame machinations, more than eager to get to the passes, runs, tackles and kicks.

Most notable, however, was the Seahawks game at Atlanta.

Both teams wore armbands honoring civil rights leader John Lewis and staged the most striking of the day’s gestures. After the opening kickoff sailed out of the end zone, the players took a knee, remaining there for about 10 seconds before trotting off the field.

“Everybody voted and said we’re going to come together as a unit,” Falcons star receiver Julio Jones said. “Collectively, we can move mountains.”

Moving mountains. That would be a good way to remember 2020, wouldn’t it? 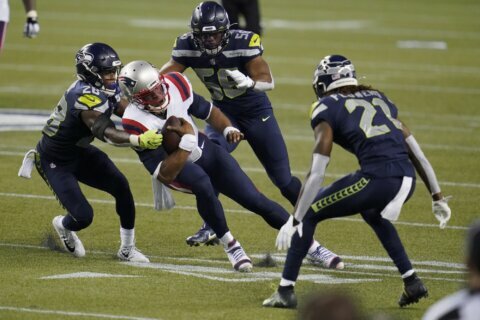 Brooks, Amadi about to get their chance on Seahawks defense