The Latest on the effects of the coronavirus outbreak on sports around the world: ___ Notre Dame tested 117 football…
Listen now to WTOP News WTOP.com | Alexa | Google Home | WTOP App | 103.5 FM

Of the two positive tests, one player was mildly symptomatic and the other was asymptomatic. The university said both are in isolation and their parents have been notified.

Also, through contact tracing seven football players are in quarantine, all of them asymptomatic. Additionally, 43 staff members, including coaches and trainers, were tested and all came back negative.

Overall, the university says it has administered 619 COVID-19 tests to members of the football program and athletic department staff with four positive tests. Two student-athletes have since recovered.

The New Orleans Saints have announced their opening game against the Tampa Bay Buccaneers in the Superdome will be held without fans because of unfavorable COVID-19 trends in Louisiana.

The decision Wednesday evening means fans won’t have a chance to attend six-time Super Bowl winner Tom Brady’s first game with his new club since leaving his only other team, the New England Patriots, for Tampa Bay.

Saints President Dennis Lauscha says owner Gayle Benson’s “overriding directive and priority is the health and safety of our fans, our employees, the Mercedes-Benz Superdome staff and all of the coaches and players.”

Lauscha says the club has been working with medical, health and safety professionals, state and local authorities, and the NFL to determine how and if the Superdome could safely host fans this season.

The Saints and government officials concluded that at this time, regional and statewide trends regarding positive coronavirus cases do not meet health and safety standards the club established to host fans in the dome.

New Orleans Mayor Latoya Cantrell said decisions about Saints home games “will be guided by data, and until we get to where we need to be, we will have to support the Saints from the sidelines at home.”

Lauscha said the Saints “remain cautiously optimistic” that fans may be able to attend the Sept. 27 game vs. Green Bay.

Nashville SC is finally about to play its first game since March, with an assistant coach filling in as manager due to a late COVID-19 test result.

Assistant coach Steve Guppy will be filling in for coach Gary Smith. Nashville announced Wednesday afternoon that Smith could not travel with the team because of COVID-19 testing results that eventually came up negative. The result was not available before the team left for Wednesday night’s game against FC Dallas in Texas.

Nashville never competed in Major League Soccer’s MLS is Back tournament in Florida because nine players tested positive for the coronavirus. That forced Nashville to become the second team to withdraw, joining FC Dallas after that team had 10 players and a coach test positive.

This is Nashville SC’s first season in MLS. The team dropped its first two matches of the season before the league shut down on March 12 because of the coronavirus pandemic.

Teams will still be allowed to practice and have team activities that are consistent with individual campus policies.

Men’s and women’s basketball are not affected at this time and will be evaluated at a later point.

Lawrence has helped spearhead the #WeWantToPlay movement. That’s a coalition of players calling on colleges not to cancel the upcoming season because of coronavirus concerns and give student-athletes greater say as it considers safety issues.

Trump said Orgeron “feels his players just want to be out there.”

The president said he’s hopeful that both college and high school football would be played in the fall. The Big Ten and Pac-12 said Tuesday they were postponing their football seasons.

The Big South Conference has decided to delay its fall sports seasons with the hopes of playing in the spring. But it will allow football-playing members to schedule up to four nonconference games in the fall at their own discretion.

Commissioner Kyle Kallander says the decision was made to protect student-athletes during the coronavirus pandemic. He says the league hopes to play conference football, men’s and women’s cross-country, men’s and women’s soccer and volleyball in conjunction with its spring sports and still crown champions in all 19 of its sports.

The Division III New Jersey Athletic Conference has decided the delay the start of conference play in basketball until Jan. 20 because of the coronavirus pandemic.

The conference’s Board of Athletic Administrators also agreed to reduce the number of NJAC games played by each team from 18 to 9 for both men and women.

The Division II Gulf South Conference is postponing competition in football, basketball, soccer and volleyball until at least Jan. 1.

The league noted that the NCAA has identified those as high-risk contact sports that are subject to significant testing requirements for all student-athletes and personnel.

The Birmingham, Alabama-based conference’s Board of Directors cited health and safety of athletes and others on campus, mandatory participation protocols from the NCAA Board of Governors and the cancellation of Division II fall championships.

The league said it would evaluation options for spring seasons in football, soccer and volleyball.

The Washington Football Team will at least begin the NFL season playing without fans in its stadium.

The team formerly known as the Redskins says it plans to play home games at an empty FedEx Field in Landover, Maryland, “out of an abundance of caution due to the rapidly changing dynamics of the COVID-19 pandemic.” The decision can be reevaluated if conditions improve throughout the course of the season.

“This decision was not an easy one,” owner Dan Snyder said. “But after several discussions with federal, state and local officials – along with input from some of the nation’s foremost medical experts, based right here in the nation’s capital – we are confident that it is the right one.” 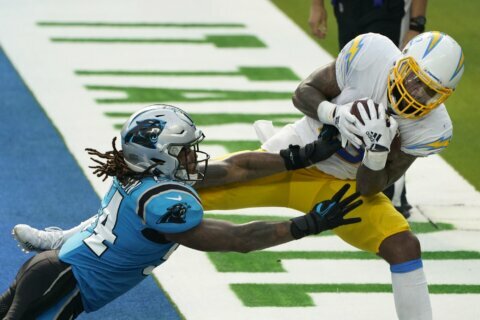 Deja vu: Chargers off to 1-2 start for 3rd straight year

Saints fumble away late momentum on curious call vs. Packers