NEW YORK (AP) — Gregg Williams has been through this before plenty of times during his 30 years in the…
Listen now to WTOP News WTOP.com | Alexa | Google Home | WTOP App | 103.5 FM

NEW YORK (AP) — Gregg Williams has been through this before plenty of times during his 30 years in the NFL.

A key player gets hurt, traded or underperforms — or a few of all of the above — and the New York Jets defensive coordinator coolly adjusts and urges his squad to move forward.

Williams stresses the cliched but certainly applicable “next man up” approach, and this season is no exception.

The Jets’ defense was dealt two big blows before training camp even began with star safety Jamal Adams dealt to Seattle and stud middle linebacker C.J. Mosley opting out of the season because of family health concerns amid the coronavirus pandemic.

And, of course, Williams didn’t flinch.

“I’ve always embraced those types of things,” Williams said of adjusting to adversity.

He’s had to do it plenty in his several stops in the NFL.

“That comfort level of other players and seeing the responses and how we’ve reacted to that in other places, but even here, we went through a lot of that defensively here last year,” said Williams, entering his second season on coach Adam Gase’s staff. “And, it’s the next man up and how we adapt to those things. The focus and energy right now is on that, on those things.

“The energy is outstanding, the focus to detail is outstanding and we’ve got to stay healthy. That’s every team, not just this team.”

Adams was traded with a 2022 fourth-round pick to Seattle last month for first-round picks in the 2021 and ’22 drafts, a third-rounder in 2021 and safety Bradley McDougald, who’ll likely slide into Adams’ starting spot.

“Jamal is a really good young man, and I really enjoyed the time with him and wish him the best,” Williams said. “And I let him know that about that situation.”

But, Williams isn’t necessarily going to change his approach on defense in the secondary without Adams.

“We’re very multiple on how we do those things anyway,” Williams said. “Jamal may get bored (in Seattle) because they don’t use their safety-type things and all the different complexities of maybe not showing what they are doing as much as we do. We’ll do still the same patterns of things, we will still do a lot of the same exact things but we will highlight the people we have here.”

That means McDougald, Marcus Maye and rookie Ashtyn Davis, a third-rounder, will be key components of the safety rotation. Williams also used cornerback Brian Poole as a safety and linebacker at times last season.

“His energy he brings to get the guys going and just how he goes about his business and stuff like that,” Maye said, “is definitely something you want to play for.”

Last season, Mosley missed all but two games in his first year with the Jets because of a groin/core muscle injury. Fellow middle linebacker Avery Williamson was sidelined the entire season with a torn knee ligament. That forced Williams to give backups such as Neville Hewitt, James Burgess and Blake Cashman lots of valuable playing time.

Those players will be among those counted on again this season to replace Mosley.

“C.J. didn’t have a bunch of on-field time last year, but he did a great job behind the scenes and a great job in the meetings, and he will continue when that thing is right,” Williams said. “But he has to do what he has to do, and family is first — make sure we understand that. I talk to the guys all the time about your biological family first, and then this is the second family.”

The restrictions NFL teams faced in the offseason because of the pandemic limited in-person interaction, but Williams said the players on defense really got to know each other — and the fundamentals of the system — through extensive video calls.

That has helped the defensive unit, according to linebacker Jordan Jenkins, enter training camp loose and ready even with the losses of Adams and Mosley.

“We’re just ahead of things,” Jenkins said. “Having Gregg back is going to be a great asset to the defense. It gives guys comfort in that you already know what you’re supposed to do, so go out there and just do it.”

NOTES: Jenkins is entering his fifth year with the Jets after re-signing in the offseason, making him and NT Steve McLendon the team’s longest-tenured players. New York hasn’t been to the postseason during that stretch, something Jenkins wants to see change. “I’m tired of (expletive) losing,” Jenkins said bluntly during a video call. He wouldn’t make any predictions on a turnaround for this year, but added: “Hopefully, we’re pretty (expletive) close.” … Williams on McDougald: “He carries himself with a really nice healthy chip on his shoulders.” … LB James Burgess was activated from the Reserve/COVID-19 list. 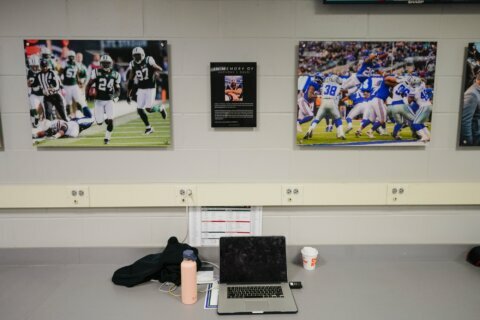