FOXBOROUGH, Mass. (AP) — As quiet as Stephon Gilmore is off the field, the Patriots cornerback has made a career…
Listen now to WTOP News WTOP.com | Alexa | Google Home | WTOP App | 103.5 FM

FOXBOROUGH, Mass. (AP) — As quiet as Stephon Gilmore is off the field, the Patriots cornerback has made a career of letting his play speak the loudest for him.

After solid seasons in 2017 and 2018, he posted career numbers last season in earning NFL Defensive Player of the Year honors. It provided a resounding return on the five-year, $65 million investment Bill Belichick made in signing him as a free agent in 2017.

New England will need to count on Gilmore even more in 2020 without some of the Patriots’ more vocal presences on defense alongside him this season. Linebacker Dont’a Hightower and safety Patrick Chung both chose to opt out because of COVID-19 concerns, and linebacker Kyle Van Noy signed with Miami in free agency.

Gilmore can’t guarantee he has another level to reach this season, but he isn’t putting limitations on himself either.

“It’s not easy. You have to work for whatever you earn in this league, whatever accolades you win, you have to work for,” he said. “I have to put the work in each and every day and compete against my teammates and get better. Hopefully that carries over to the game, but it takes one day at a time, and that’s how I approach it.”

That mantra earned him a lot of trust from his coaches last season. Each week he was assigned the task of defending opposing offenses’ top receiver and he did it well.

He led the Patriots with a career-high six interceptions, including two returned for touchdowns. He also had 20 passes defensed for the second straight season.

While Gilmore said he didn’t change up his routine much this offseason, one byproduct of the longer than expected time off was that he was able to devote more attention to nutrition and finding more ways to get the most out of his body.

But he did enlist some extra help, hiring former NFL cornerback Dre’ Bly to fine-tune his technique. Gilmore said they worked on “all parts of my game.”

Along with the production Gilmore and others will have to account for without Hightower, Chung and Van Noy, they will also need to find someone to take command on the field.

Both Hightower and Van Noy spent time in recent seasons wearing the headset on defense to relay plays from the sideline to teammates.

Gilmore isn’t sure who will take over that this season, but he said it doesn’t have to be just one person.

“I think as a whole defense, we all communicate well with each other. Someone else will have to step up,” he said. “That’s a part of the National Football League. Someone will have to come in and be prepared and take over someone else’s slack. A lot of things happen in the National Football League, so you have to adjust on the run, trust your teammate and get the job done.”

Another extra task could also be assuming a mentor role for younger players such as rookie safety Kyle Dugger, whom the Patriots selected in second round of April’s draft. With Chung unavailable, Dugger may be needed to contribute more than the coaching staff originally anticipated.

Gilmore, who will turn 30 in September, said he’s ready to pass along any knowledge he can to help Dugger and the other newcomers learn the system.

“We’ve seen a lot of football, and he’s willing to learn and all the guys are willing to learn,” Gilmore said. “It’s not easy, but that’s what you have teammates for — to pull them along. And (Dugger’s) willing to learn. That’s what it’s going to take for him and other players to help us out on the field.”

Adopting a little of that rookie mindset is something Gilmore said he will be doing as well.

NOTE: The Patriots signed OL Ben Braden, TE Paul Butler and TE Alex Ellis on Monday. All three entered the league as undrafted free agents and have spent time on various practice squads. Ellis has the most experience, appearing in three games last season with the Eagles. 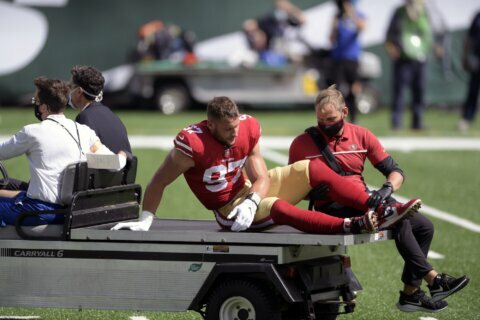