ENGLEWOOD, Colo. (AP) — Right tackle Ja’Wuan James informed the Denver Broncos on Monday that he’s opting out of the 2020 season over coronavirus concerns.

The Broncos were counting on their headliner from last year’s free agent class to bounce back from a balky right knee that limited him to just three appearances in 2019 after signing what was at the time the biggest contract ever for a left tackle, $51 million over four years.

Elijah Wilkinson could be in line to fill in for James for a second straight season, although Wilkinson is still recovering from offseason foot surgery.

James tweeted that while it was a difficult decision to skip the upcoming season, it was the right one for him and his family.

“There’s just too much unknown about this virus and about plans handling it going forward,” James wrote. “My wife and I were blessed with our newborn son May 22 and he’s now my top priority. Although I worked all offseason and invested in my body to bounce back and have a great year on the field, it’s just not worth risking the health of my loved ones.

“I’ve seen this virus already hospitalize one of my family members and hope to not have that happen again,” James added. “We can’t live in fear or just confine ourselves just to our homes but we all have to make the right conscious choices and navigate through day to day life to protect our neighbors.”

James wished the NFL well as it navigates the COVID-19 crisis.

“All my brothers around the league, I pray for you and your families’ safety throughout the season and rest of this pandemic,” James wrote.

James played just 63 snaps in his first season in Denver after the Broncos signed him to a deal that included $32 million in guarantees.

He got hurt on the 10th play of the season, in the opener at Oakland, and didn’t return until midseason when he tore scar tissue and the meniscus in his right knee. He returned in December but only played the first half at Houston as his knee kept buckling on him.

Although coach Vic Fangio often was mystified by James’ injury and slow recovery, he never put him on injured reserve. James said in December that he didn’t need surgery but was eager to bounce back in 2020 to show his team and its fans he was worth the big contract he signed.

“To the Denver Community, these first two years weren’t what I expected them to be when arriving here,” James said in his Twitter statement. “I know you don’t know me well and a false narrative was painted of me last year due to comments made about my injury, but I am invested in this city and my team.

“I look forward to the future we have here, but in that same breath, I’m even more invested in my family. Everyone make sure to stay positive through these crazy times and enjoy your loved ones. I hope 2021 will be a better year for all of us. Take care of yourselves, because ultimately, health is wealth.”

Wilkinson subbed for James on the right side last year but the Broncos wanted him to compete with incumbent left tackle Garett Bolles during training camp this summer, a plan that was crimped by Wilkinson’s left foot operation.

The Latest: Chiefs and Chargers go to overtime tied at 20 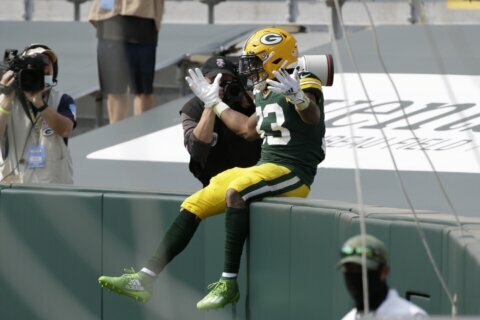