The Dallas Cowboys have agreed to a contract with longtime Minnesota defensive end Everson Griffen, a person with knowledge of the deal said Wednesday.

Griffen is the latest addition of a pass rusher with a pedigree for the Cowboys, who signed former San Francisco end Aldon Smith during the offseason.

Griffen is getting a one-year deal worth up to $6 million, according to the person who spoke to The Associated Press on condition of anonymity because the agreement hasn’t been announced.

The deal with Griffen comes two days before the first practice of training camp while the Cowboys await word on a possible reinstatement of suspended defensive end Randy Gregory, whose return is appearing less likely.

In February, Griffen opted out of the final three years of his contract with the Vikings and became a free agent. The 32-year-old spent his first 10 seasons in Minnesota.

Griffen is 15th among active players with 74 1/2 sacks. He didn’t become a starter until his fifth season in 2014, then averaged nearly 11 sacks per year over four seasons.

The unsurprising move to opt out by Griffen cleared more than $13 million in salary cap space for the Vikings this year. And it came after he agreed in 2018 to a restructured contract to avoid being released coming off his lowest sack total in five years.

Griffen had a decent bounceback season last year with eight sacks following a troublesome season when he took five games off to treat his mental health.

Griffen was taken by ambulance to a hospital the day before a game in 2018, after a scary series of incidents around the Twin Cities when he threatened gun violence in a hotel lobby and made repeated comments about believing people were trying to kill him.

Smith has had off-field issues as well, having recently been reinstated from a nearly five-year suspension over substance-abuse issues and other legal problems. Smith was one of the NFL’s best pass rushers when issues started affecting his career in 2013. 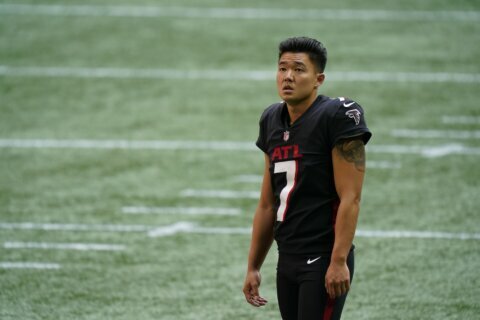 Foles gets nod as Bears prepare for challenge against Colts