Super Bowl Sunday is so popular, nearly half of American sports fans would give up one of their other work holidays in order to have a day off after the game.
Listen now to WTOP News WTOP.com | Alexa | Google Home | WTOP App | 103.5 FM

NASHUA, N.H. (AP) — Nearly half of American sports fans would give up one of their other work holidays in order to have a day off after Super Bowl Sunday, according to a survey commissioned by the daily fantasy sports company DraftKings.

The survey, which was conducted by the polling firm SurveyGizmo, found that more than 40% would rather work Presidents Day, Martin Luther King’s birthday or Columbus Day than the Monday after the NFL championship game.

About one in 10 would even prefer to work Christmas or Thanksgiving, and still more would give up the Fourth of July, New Year’s Day or Memorial Day.

“We were curious as to what extent this was a national holiday in itself,” DraftKings president and co-founder Matt Kalish said. “People like to go out to watch the game. They don’t want to be thinking, ‘I’m going to get home at 12:30 or 1 a.m. I don’t want to be getting up to go to work the next morning.’”

The company contacted by email a nationally representative sample of 1,003 people who identified as sports fans. It found 43% would prefer to give up one of their work holidays in order to take the day after the Super Bowl off; 43% said they would not, and 15% said they aren’t sure.

It also found that 45% are more likely to take Super Bowl Monday off if their preferred team wins the game. About three in 10 agreed with the statement, “I have called in sick on short notice after the Super Bowl in the past.”

The company also asked fans their feelings about sports betting and found that 82% of those self-identified sports fans want to be able to bet legally on the Super Bowl. More than three-quarters — 78% — said they are more likely to watch the whole Super Bowl if they have money riding on it.

“That’s not surprising,” Kalish said. “People like having something on the line when they’re watching major events like the Super Bowl.”

Although DraftKings started by allowing fans to win money playing fantasy sports, it has entered the sports betting market since the Supreme Court overturned a national ban on it in 2018. Gambling on sports is now offered in 14 states — not including Massachusetts, DraftKings’ corporate home.

Even so, the company already gives its staff the day off on the Monday after the Super Bowl.

“It’s almost a reward for our employees,” Kalish said. “We’ve always had a pretty lenient policy. We found like half the company was taking the Monday off after the Super Bowl anyway.” 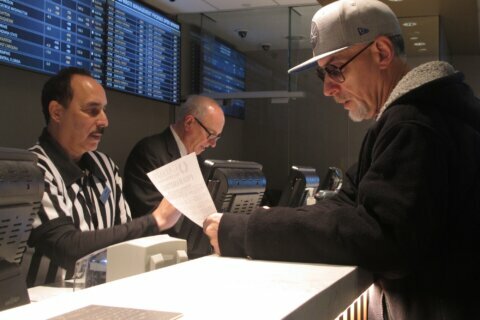