The Los Angeles Chargers’ playoff hopes are looking down as well after their longtime franchise quarterback and his offense came up empty at Azteca Stadium on plenty of opportunities to turn around this game and their season.

Rivers passed for 353 yards during his first four-interception game in three years, and the Chargers couldn’t overcome those miscues in a 24-17 loss to the Kansas City Chiefs on Monday night.

Rivers’ final throw was maybe his worst: Instead of hitting Austin Ekeler in stride or picking another target with 18 seconds to play, he floated a throw down the sideline into triple coverage, and Sorensen picked it relatively easily.

“Obviously, in hindsight I shouldn’t throw it, or throw it a little further,” Rivers said. “I didn’t get fooled. I just made a poor throw.”

Rivers’ grim acceptance of another rough outing has become common this season for the Chargers (4-7), whose playoff hopes are slim after five losses in seven games. All seven of their defeats this season are by seven points or fewer, with the offense constantly moving the ball well between the 20s, but unable to get the key score to win a game.

“We’ve moved it well, but you have to score touchdowns, and you can’t turn it over,” Rivers said. “That’s how you win in football at any level.”

Much of that responsibility naturally falls on Rivers, who has thrown 14 interceptions. That’s already his worst total over a full season since 2016, and more than any NFL quarterback except Jameis Winston.

Rivers has thrown 12 interceptions in the Bolts’ losses, and just two in their wins. Add in his two fumbles, and Rivers has turned the ball over 16 times in 11 games.

“He just has to execute better, as far as turnovers,” Lynn said. “It’s not always on the quarterback. Sometimes the quarterback is getting hit late. Sometimes a receiver may slip down. You can’t put all those turnovers on Philip, but his turnovers are higher than I would like, and he knows that.”

Rivers has started every game the Chargers have played since 2006, and he is still producing numbers with the Bolts’ outstanding collection of skill players. He surpassed 3,000 yards passing for the 14th consecutive season, matching the fourth-longest streak in NFL history.

But with the Chargers’ final five games reduced in importance by their losing streak, fans have begun to wonder whether the team would ever look to the future by giving a start to backup Tyrod Taylor, who had a credible career as a starter in Buffalo. Taylor is more elusive than Rivers, and the Chargers likely could open up the playbook for more run-pass option plays.

Lynn is highly unlikely to do it, but he has a bye week to think about it.

Rivers’ mistakes weren’t the Chargers’ only problem, particularly during a weird first half in which they racked up 312 offensive yards but failed to score a touchdown. Rivers threw two interceptions, one while getting hit by Frank Clark, but Los Angeles’ execution and play-calling in the Kansas City end forced the Chargers to settle for four field goal attempts.

“The ref told me it was a fumble, but they ruled it a pick,” Rivers said of the interception caused by Clark and caught by 312-pound defensive tackle Derrick Nnadi. “Who cares? I’m over the stats, except how they affect the win-loss column.”

The Chargers’ play-calling seemed curious in Shane Steichen’s second game on the job. Against one of the NFL’s worst run defenses, they threw the ball 52 times and ran it just 19 — even while averaging 4.9 yards per carry.

The Chargers got the ball back four times in the fourth quarter with the chance to tie it with a touchdown drive, but the first three went nowhere. Thanks to a spectacular 50-yard catch by Mike Williams and another brilliant catch-and-run by Ekeler, the Chargers reached the Kansas City 14 in the final minute, only to turn it over one last time.

“Not scoring in the red zone, turning it over — man, that gets you beat,” Rivers said. “That’s what’s gotten us beat all year.” 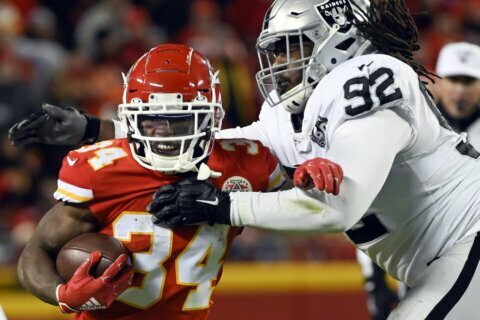 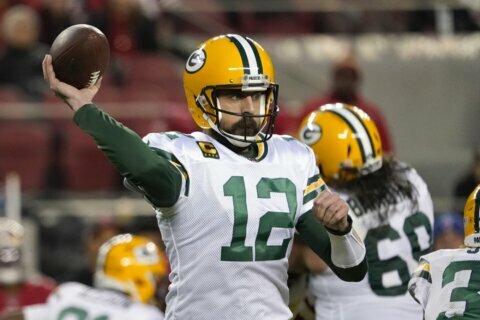 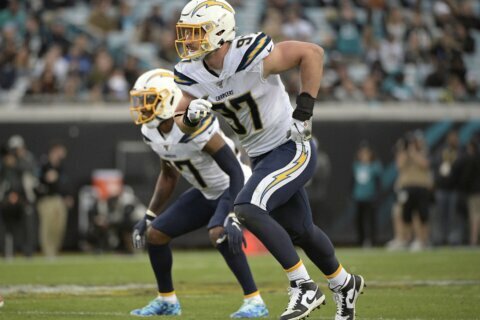