FLORHAM PARK, N.J. (AP) — Kelvin Beachum showed up in downtown Newark earlier this week with the greatest gift he could provide.

Lots and lots of bottles of it.

New Jersey’s largest city is dealing with a serious drinking water issue, stemming from the old lead pipes through which it flows into about 15,000 homes. While improvements are steadily being made by the city to replace the pipes and provide filters, the New York Jets left tackle wants to be sure residents are getting what they need.

“I think water’s a human right,” Beachum said. “And clean water, especially in America, is a basic human right.”

Newark residents with homes containing lead pipes began receiving bottled water in August after lead levels tested high in some places even while using filters. The city has begun replacing about 18,000 of its pipes leading from water mains to residences, financed by a $120 million bond taken on by Essex County. Newark has distributed more than 100,000 cases of water since mid-August, and recreation centers also are giving out water filters and replacement cartridges.

“The city is making strides,” Beachum said. “The government is saying they’ve got it taken care of, but I think there’s still a huge trust factor that still has to happen for people that had contaminated water to say, ‘Hey, two months later, the water is fine.’”

After seeing reports on TV over the summer about the situation in Newark, which mirrored water emergencies in Flint, Michigan, and Washington, D.C., Beachum decided to try to make a difference.

He donated $10,000 to the United Way of Essex and West Hudson and then spent a day off during training camp helping to distribute 100,000 bottles of water to residents. After seeing the impact firsthand, Beachum wanted to continue to help.

So Beachum partnered with PepsiCo Inc. and pledged that for every bottle of Aquafina water bought during the Jets’ game against the Giants at MetLife Stadium last Sunday, one bottle would be donated to the United Way of Greater Newark. He ended up giving out 26,000 more bottles of water on Tuesday.

“They were blown away,” said Beachum, who was selected the NFL Players Association’s “Community MVP” on Friday for his efforts. “There was one family where the first time I did it, they were actually on their last case of water when I delivered another three cases. On Tuesday, it was a single mom with seven kids that came and picked up cases of water.

“To be able to impact people that actually need it? I mean, she has seven kids and she’s only got two bottles of water left and you get three cases of water that you weren’t expecting, for me that’s the impact that I desire to make.”

Beachum, who was raised in Mexia, Texas, has focused on clean water as one of his many charitable platforms.

“It’s just mindboggling,” Beachum said. “You’ve got 15,000 families — kids, elderly, infants — that have to decide where their clean water is coming from to be able to make formula, to be able to take a bath, brush your teeth — simple things like that. You might say, ‘Aw, you don’t have water.’ No, you’ve got to wash vegetables with water, wash your hands with water, brush your teeth with water, take a bath with water. It’s all those things that people might not think about.

“The fact it’s happening in Newark, and we’re right down the street — I wanted to make sure I was able to do something about it.”

Arizona rookie quarterback Kyler Murray is a big deal in the desert these days, but even he can get a little star-struck.

The 22-year-old was sitting courtside Tuesday for an NBA game between the hometown Phoenix Suns and Los Angeles Lakers. With about 25 seconds remaining in the fourth quarter, Lakers star LeBron James walked over to Murray and the two briefly shook hands.

“It was crazy for me just because he’s like Michael Jordan to kids my age,” Murray said. “Getting to watch him up close, and then him acknowledging me at the end was pretty dope.”

Murray said there wasn’t any time to talk, but the mutual respect was obvious.

“He just dapped me up,” Murray said grinning. “It was kind of understood.”

FIT TO BE TIED

When the San Francisco 49ers took over possession with 1:50 remaining in overtime last week and Seattle out of timeouts, playing for a tie might have been a smart strategy.

The Niners had a two-game lead in the loss column in the race for the division and top seed in the NFC and wouldn’t have been hurt too much by a tie. Instead, Jimmy Garoppolo threw three straight incomplete passes, burning only 14 seconds off the clock and leaving Russell Wilson 1:36 to drive to the winning field goal in a 27-24 win.

“Obviously when you only take a few seconds off the clock and give it back, I wish I would’ve taken three knees instead of doing that,” coach Kyle Shanahan said.

But Shanahan stands by his play calls, noting that a first-down pass was batted down at the line and Dante Pettis dropped a short one on second down. Had either of those been completed, the Niners would have been able to burn some more clock.

The players deferred to Shanahan’s strategy decisions, but were pleased with the chance to go for a win.

“It’s hard to play for a tie,” Garoppolo said. “I don’t know if I’ve ever done that before. Yeah, I’m glad we went for the win.”

“We’re so grateful and so blessed that we are able to put this together. And, so, that’s been our quest of really allowing kids to have a chance to see light in their lives, not seeing darkness.”

Barton and Lott founded Champion Charities in 2004 after Barton lost both of his parents to brain tumors. They had instilled their love of theater in him at a young age. The foundation hosts “Night at the Theater” fundraisers in San Francisco and New York each year. The goal is to raise money for treating and researching brain tumors and supporting patients suffering from the disease.

Michael Thomas is off to a record-breaking start to the season — and his career.

The New Orleans Saints wide receiver leads the NFL with 86 catches and 1,027 yards receiving in just nine games. If Thomas catches four passes Sunday against Tampa Bay, he would set the league mark for most receptions through 10 games, topping the 89 by Indianapolis’ Marvin Harrison in 2002 and Atlanta’s Julio Jones in 2015. He would also become the first player in NFL history to have 90 or more catches in each of his first four seasons.

Thomas has 407 career catches since being drafted in the second round out of Ohio State in 2016. He topped Jarvis Landry (400) for the most receptions through a player’s first four seasons, and also reached 400 in the fewest games (56) in league history. 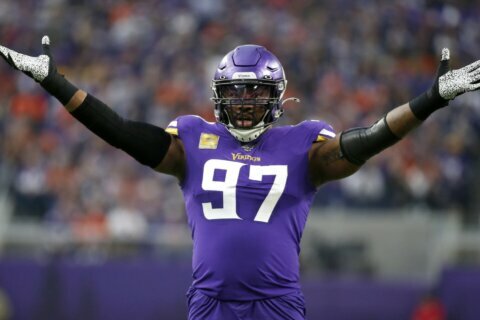