Cowboys clicking on offense heading into matchup with Lions

DETROIT (AP) — The Dallas Cowboys ’ offense is having a great year — statistically at least.

Dallas is leading the league in total yards for a fourth straight week and has a chance to close the season as the NFL’s top-ranked offense for the first time in 42 years.

“It’s all kind of clicking for them,” Detroit Lions cornerback Darius Slay said.

Despite the success of Dak Prescott and Co. — they are averaging 437-plus yards a game and are the league’s best offense on third down — the Cowboys are not rolling into the Motor City with much momentum.

Dallas (5-4) is coming off a loss to Minnesota at home and has dropped four of six games.

The Cowboys are tied with Philadelphia atop the NFC East, but they probably can’t afford to lose to the slumping Detroit Lions (3-5-1) because their schedule down the stretch is challenging with games against New England and the Eagles on the road.

“This is a confident group that knows we’re going to peak at the right time,” Prescott said. “We’ve got all the faith and trust that we’re going to get there and handle the things that we need to handle.”

The Lions, meanwhile, have lost five of six after a solid start and don’t want the season to slip away.

Here are some things to watch Sunday at Ford Field:

Cowboys running back Ezekiel Elliott had five 100-yard rushing games in his first eight games for the first time in his career.

However, Elliott has been held to four of the nine lowest rushing totals in his career when he hasn’t run for 100 yards.

The two-time rushing champion struggled in the 28-24 loss last week to Minnesota. His longest carry was 6 yards, and he was limited to 47 yards on 20 carries.

A chance to win escaped when Dallas went to Elliott three straight times inside the Minnesota 15 late in the game. He had two rushes that for a combined minus-3 yards before he was the target on an incomplete pass on fourth down.

“Take it with that chip on your shoulder and use it as fuel when you go back to work the next week,” he said.

Detroit will be without quarterback Matthew Stafford for a second straight week because of hip and back injuries, giving Jeff Driskel another opportunity to show the NFL what he can do under center.

The fourth-year pro was 27 of 46 for 269 yards passing and 37 yards rushing — all career highs — with a touchdown and an interception in his sixth career start in last week’s loss at Chicago.

“He’s a really talented guy,” Dallas coach Jason Garrett said. “He’s big. He’s athletic. He can throw it. He played a lot of football in college and just seemed like a really smart guy who understood the game and just needed an opportunity. So, it doesn’t surprise us one bit that he’s playing.”

Driskel got his first opportunity to play last season with the Cincinnati Bengals, starting five games in place of the injured Andy Dalton, with mixed results.

“Everybody wants to be out on the field and playing and competing,” Driskel said. “Kind of how we all got here is our competitive nature.”

PLAYING A MAN DOWN

The Cowboys already know one way they can improve the defense against screen passes after Dalvin Cook tied his career high with 86 yards receiving, most of it on screens. Dallas can start by making sure 11 men are on the field. There were just 10 on a 30-yard play by Cook that set up the second Minnesota touchdown for a 14-0 lead in the second quarter. The play was made worse for the Cowboys when defensive end Robert Quinn was called for roughing the passer.

Detroit got off to a 2-0-1 start and had chances to win the next two games in part because its defense forced 11 turnovers in five games. The Lions’ defense has not recovered a fumble or made an interception in two straight games and has forced only one turnover over a four-game stretch.

“We’re trying to find new tricks and trades to turn the ball over,” Slay said.

Dallas left guard Connor Williams will miss several weeks following arthroscopic knee surgery. Right tackle La’el Collins (knee and back) and right guard Zack Martin (back, ankle and elbow) are also banged up, but are expected to play at Detroit. Xavier Su’a-Filo played well when Williams was out with a knee injury last year and is taking his spot again. 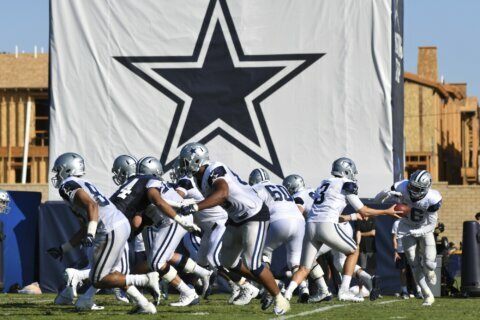