Dak Prescott completed all four of his pass attempts, caught one and led Dallas to a field goal in a brief cameo in the exhibition opener as the Cowboys went on to lose to the San Francisco 49ers 17-9 on Saturday night.
Listen now to WTOP News WTOP.com | Alexa | Google Home | WTOP App | 103.5 FM
(1/7) 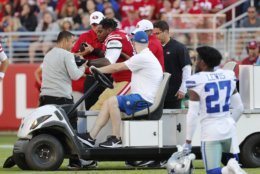 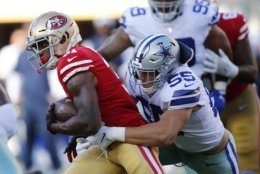 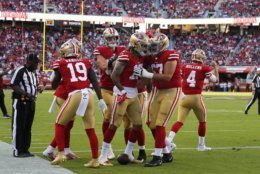 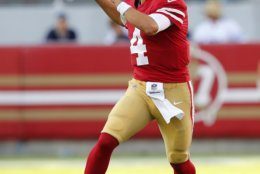 SANTA CLARA, Calif. (AP) — Dak Prescott got the Dallas Cowboys off to a good start in a brief cameo in the exhibition opener. San Francisco’s rookie receivers took over after that to lead the 49ers to the victory.

Prescott completed all four of his pass attempts, caught one and led Dallas to a field goal on his only drive before the 49ers rallied behind two touchdown catches from Jalen Hurd to beat the Cowboys 17-9 on Saturday night.

“It was a good first drive,” Prescott said. “We came out pretty clean, in and out of the huddle. We set the tempo we wanted to. Obviously, we wanted to get in the end zone.”

The drive stalled when his third-down pass in the red zone was batted at the line by Sheldon Day right back to Prescott, who lost a yard on the play, setting up Brett Maher’s first of three field goals.

“I just wanted to show I could catch too,” Prescott said. “At that point, I figured it was time to get down.”

Dallas didn’t have its entire first-team offense on the field as star running back Ezekiel Elliott remains a holdout in search of a new contract. Rookie Tony Pollard got the nod and ran four times for 16 yards on his only drive.

“He looks confident out there,” owner Jerry Jones said. “We’ve seen him do it. We know he’s capable if he really needs to, to carry the whole load.”

The Cowboys also played most of their starters on defense for the first two drives, while the Niners kept about 30 players out either with injuries or out of caution. Only a handful of projected starters played for San Francisco, with quarterback Jimmy Garoppolo waiting until next week to make his return from knee surgery.

Despite that approach, San Francisco had three players go down with injuries in the first quarter with swing tackle Shon Coleman (right ankle), running back Raheem Mostert (concussion) and defensive tackle D.J. Jones (knee) all getting hurt.

Hurd, a third-round pick, caught the two TD passes, bowling over a defender on the first and leaping over one on the second. He finished with three catches for 31 yards.

“I can do different things,” Hurd said. “We’ll just see what they do with me. I’m just trying to seize the opportunity to make a play.”

Niners safety Adrian Colbert was ejected in the third quarter for an illegal hit on defenseless receiver Cedrick Wilson. This is the first season that replay officials in New York can eject players for illegal hits. The 49ers were penalized 18 times for 216 yards for the game.

The game had special meaning for Dallas four-time Pro Bowl center Travis Frederick, who missed all last season battling a nerve disorder. He played the opening drive in his return.

“It was a good feeling to be out there, playing with the guys and being a part of the game,” he said. “I am trying to treat everything just like a normal preseason and a normal training camp.”

Maher, who missed six field goals from inside 50 yards last season for Dallas, got plenty of chances in this game as he tries to show the consistency Dallas wants from that position.

He made kicks from 25, 40 and 31 yards in the first half, while also missing another field goal wide right from 35 yards.

The bad news on injuries for the 49ers wasn’t limited to the game. The team announced that projected starting slot receiver Trent Taylor had surgery on a broken bone in his foot Friday and was expected to miss four to six weeks.

The most serious injury from the game appeared to be Coleman, who had an air cast placed on his lower right leg and was taken off the field on a cart after getting hurt on San Francisco’s opening drive.

The Cowboys lost LB Luke Gifford with what Jones described as a “significant” ankle injury in the first half. Gifford had an interception before getting hurt.

Cowboys: Play the Los Angeles Rams in Honolulu on Aug. 17. 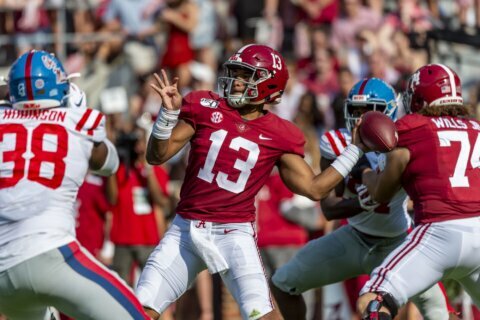 Tagovailoa’s agent says he’s healthy, will be ready for camp