PHOENIX (AP) — That Hall of Fame slot will have to stay vacant for a while. Larry Fitzgerald isn’t ready…

PHOENIX (AP) — That Hall of Fame slot will have to stay vacant for a while. Larry Fitzgerald isn’t ready to hang up the cleats just yet.

The receiver, whose career statistics rank among the best ever to play the game, has signed a one-year contract to return for a 16th season with the Arizona Cardinals.

“No player has meant more to this franchise or this community than Larry Fitzgerald,” team President Michael Bidwill said Wednesday in the news release announcing the signing.

“A fire burned inside of me my rookie year,” he wrote, “a desire, over all else, to be great. To excel on the field. To impact the lives of others off of it. I’m grateful that the fire still burns just as bright today, and that this organization has let me chase that fire for well over a decade.”

Fitzgerald continued: “Nothing excites me more than continuing to chase greatness with everyone here on and off the field.”

Fitzgerald, who will be 36 before the next season begins, may have been enticed by the hiring of Kliff Kingsbury to replace the fired Steve Wilks. Kingsbury will bring his “air raid” offense from Texas Tech, where he coached for six seasons, and brought in veteran assistant coach Tom Clements to work with quarterback Josh Rosen, who had a rocky rookie season.

In recent years, State Farm Stadium rocked with chants of “Lar-ry! Lar-ry!” after one of his inevitable big plays. Probably no sports figure in Arizona has been as well-loved as No. 11.

“I think they had a great conversation and he’s excited about focusing on the offense,” Bidwill said. “Obviously, he was very disappointed as all of us were in 2018. He bleeds Cardinal red. He wants to be part of getting this turned around. It’s exciting he was able to make a quick decision and get right to it.”

Arizona went 3-13 last season, the worst record in the NFL and matching the worst for the Cardinals since the franchise moved to the desert from St. Louis 30 years ago. The Cardinals finished last in the league in total offense, passing and rushing.

Consequently, it was a down year for Fitzgerald statistically, too. After three straight 100-catch seasons, Fitzgerald had 69 receptions for 734 yards and six touchdowns. He did, however, throw his first career TD pass, against the Rams in the next-to-last game of the season.

Fitzgerald has been remarkably durable in his career. He’s caught a pass in 227 consecutive games, the second-longest such streak in NFL history.

With 16,279 yards receiving, Fitzgerald passed Hall of Famer Terrell Owens for second (behind Jerry Rice) on the NFL career list. With 1,303 career catches, he passed Rice for most receptions for one team in his career. By playing in the season finale at Seattle, Fitzgerald tied kicker Jim Bakken for most games by a Cardinal at 234.

Drafted No. 3 overall by the Cardinals out of Pittsburgh in 2003, Fitzgerald has never indicated a desire to play anywhere else, despite the intermittent struggles of the team.

He’s caught passes from 19 quarterbacks during his time in Arizona, with the most memorable years coming when he was paired with Kurt Warner and Carson Palmer.

He’s been at his best in the postseason.

No one has matched his record of 942 yards receiving in his first nine playoff games. He has five 100-yard receiving games in the postseason, an NFL-best three of at least 150 yards.

At the news conference announcing his hiring, the 49-year-old Kingsbury was asked about trying to woo Fitzgerald back for another season.

“What a great role model, what a great leader to have on your team,” Kingsbury said at the time, “and I would be honored to work with him. He’s a guy I’ve admired from afar for a long time.”

Fitzgerald earned $11 million each of the past two years and this deal probably is about the same.

“I don’t want to push Larry, I want him to come to his own decision,” Bidwill said. “When he was ready . we did the deal. Was over at his house signing it on his kitchen table yesterday morning before he left town.”

It’s been a good month for Fitzgerald. Last week, while playing golf with former President Barack Obama, he hit a hole in one.

Now Fitzgerald, who shared the NFL Walter Payton Man of the Year award with Eli Manning in 2016, will probably be off soon on one of his trademark trips to some faraway part of the world.

Most importantly for the Cardinals and their fans, he’ll be back when summer workouts begin. 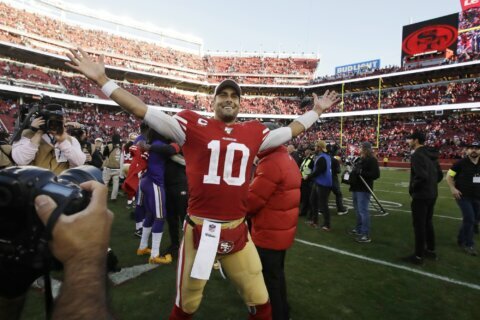 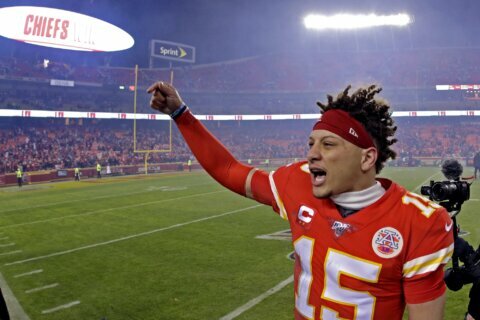 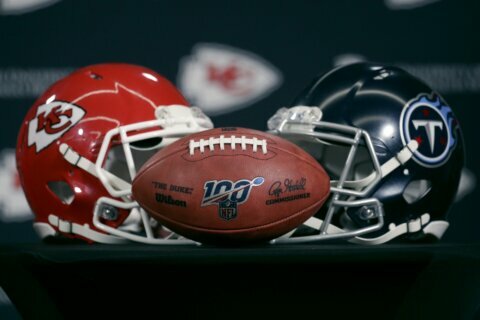