TOPEKA, Kan. (AP) — Kris Kobach, the Kansan with a national reputation as a hardline provocateur on immigration and voter ID laws, is trying to rebrand himself as a calmer, steadier voice in his comeback bid for elective office.

Republicans hope the candidate for Kansas attorney general is a “new” Kobach. Many of them say he’s staying more on message with a better organized campaign after losing the 2018 race for Kansas governor and a 2020 U.S. Senate primary. Both of those losses were chalked up to disorganized campaigns and Kobach being too abrasive even for very Republican Kansas voters.

The former Kansas secretary of state built a national profile — and created lasting political foes — as the go-to adviser for state and local officials wanting to crack down on illegal immigration. But his platform this year doesn’t mention immigration. The signature prop of his campaign for governor four years ago was a Jeep painted with a U.S. flag design and equipped with a replica machine gun, and it’s nowhere to be seen this year.

“There’s been some learning, trial and error, over time, and I think Kobach as a candidate has grown and become more disciplined,” said Moriah Day, a Republican and gun-rights activist who once worked for Kobach in the secretary of state’s office. “There are certainly advisers and others who have pushed hard for that discipline, and some of them have been together for a few cycles now.”

Kobach’s Democratic opponent in the Nov. 8 election is Chris Mann, who is making his first run for elective office. While Republicans have won 80% of statewide down-ballot races over the past 50 years, both parties see the Kobach-Mann contest as a toss-up because of Kobach’s political baggage.

Some of the baggage comes from Kobach advocating strict immigration laws years before Donald Trump ran for president in 2016 and upsetting not only immigrant rights advocates but GOP-leaning business and agricultural groups.

Kobach also pushed the idea that droves of people could be voting illegally and championed a tough prove-your-citizenship rule for new Kansas voters, only to see the federal courts strike it down and order the state to pay voting rights attorneys $1.4 million.

Kobach served as co-chairman of Trump’s short-lived presidential advisory commission on “election integrity” and promoted Trump’s lies about widespread voter fraud. At the time, The Associated Press reported that Kobach oversaw an election system in Kansas that threw out at least three times as many ballots in the 2016 election as any similarly sized state did, fueling concerns about massive voter suppression should its practices become the national standard.

Then there was his brand in his 2018 and 2020 races, the fighter who was even willing to take on GOP leaders. While Republicans across the U.S. have embraced a combative persona in Trump and other candidates, and Trump carried Kansas twice by wide margins, the state’s voters more often have favored candidates with more of an aw-shucks demeanor.

The Jeep with the machine gun became a symbol of how Kobach seemed not to care that he annoyed or angered some voters. He mocked what he called the “snowflake meltdown” the first time he rode it in a parade in 2018.

Some are skeptical that Kobach has changed in any substantive way, and say he is not always on message. For example, his comments during campaign appearances sometimes veer into his plan to slowly and quietly maneuver to ban abortion.

Kansas voters in August decisively rejected a proposed amendment to the state constitution that would have cleared the way for the Republican Legislature to tighten abortion restrictions or ban the procedure. Kobach backed the measure, which was GOP lawmakers’ response to a 2019 Kansas Supreme Court decision declaring access to abortion a “fundamental” right under the state’s Bill of Rights.

Kobach advocates amending the state constitution to elect Supreme Court justices rather than have governors appoint them. Eventually new, more conservative justices would overturn the 2019 ruling, he argues.

Backers argue that Kobach’s views on abortion are well-known enough that he can’t backpedal now.

But he’s pitching a proposal that faces big political hurdles, and some Republicans fear that talking about abortion will keep moderate Republicans and independents riled and boost Democratic turnout. Kobach has said he’ll defend existing abortion restrictions as attorney general, but his critics worry that he’ll hunt for new ways to curb access if he’s elected.

“I thought we had a representative form of government, but it looks like Kris Kobach will certainly be willing to subvert the wishes of the voters when he has a chance,” said former Kansas House Majority Leader Don Hineman, a moderate Republican and western Kansas farmer.

Democrat Mann, 46, was a police officer in his early 20s in the northeastern Kansas city of Lawrence, where he now lives. An on-duty accident involving a drunken driver ended his career in uniform and he then served as a prosecutor in nearby Kansas City, Kansas, as a state securities regulator and on the board of Mothers Against Drunk Driving.

“I’m not in this to chase the spotlight or to grab attention like my opponent, and that’s all he’s going to do,” Mann said during an interview.

Kobach, 56, said he’s learned from past campaigns and is delegating more tasks. For this year’s race, he hired Axiom Strategies, a prominent Kansas City-area GOP firm, and his chief consultant is a conservative state senator, J.R. Claeys, in good standing with top Kansas Republicans.

And that Jeep with the replica machine gun from four years ago?

“That was a different time,” Kobach said, chuckling, noting that four years ago was “right in the middle” of Trump’s high-drama administration.

Kobach’s lower-key campaign appeals to William Hendrix, a 21-year-old Topeka resident who is treasurer for a local Young Republicans group. He predicted that as attorney general, Kobach would “cool down on the campaign-trail rhetoric.”

“He’ll see the limitations of the office and also at the same time, what he can do with what he has,” Hendrix said.

But Kobach also might appear more measured than in the past because if he loses this year, “it really could be, possibly, the end,” said Bob Beatty, a political science professor at Washburn University in Topeka.

Patrick Miller, an associate University of Kansas professor of political science, wondered whether Kobach seems less provocative because the attorney general’s race can’t command the same kind of attention his 2018 and 2020 races did.

“All of that attention given to him in 2018 was an invitation for him to be very flamboyant as a politician,” Miller said. “Maybe losing had an effect on that and maybe he’s more cautious. Maybe, he’s more calculating.”

Kobach has promised to spend each breakfast thinking about potential lawsuits against the Democratic president’s administration and during one Topeka event urged the crowd to chant, “Sue Biden.”

The candidate himself goes back and forth on whether there’s a new Kobach. He says there is a little truth in the GOP buzz but some exaggeration, too.

“I’m still my old self in the sense that I stick to my guns,” Kobach said. “I don’t back down.” 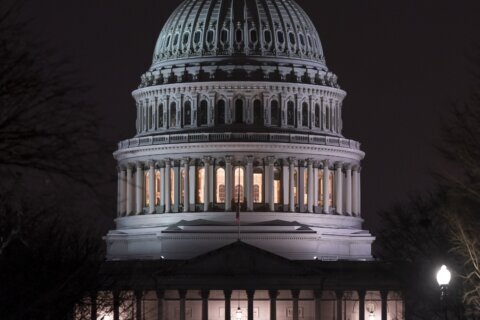