Holidays: 'Enchant' shines with millions of lights in Nats Park | Where to see holiday lights | Send in photos of decorations | How to give greener this season
Home » College Football » Virginia basketball back on… 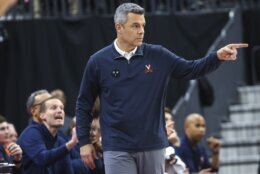 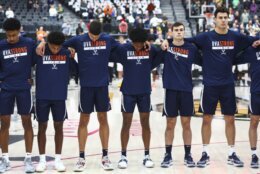 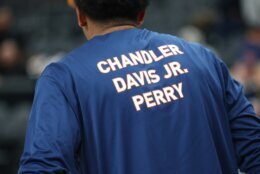 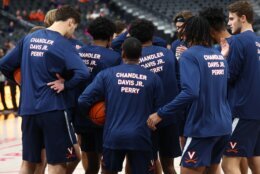 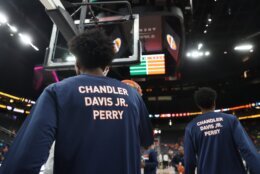 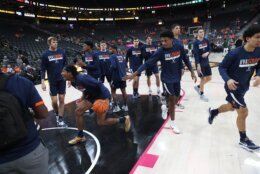 LAS VEGAS (AP) — Kadin Shedrick welcomed Virginia’s escape to Las Vegas, 2,300 miles away from Charlottesville and the horror of the past week, as the campus mourned the shooting deaths of three Cavaliers football players.

Shedrick and his teammates honored their fallen fellow athletes on Friday night in their first game since Sunday’s shooting. Before the game against No. 5 Baylor, Virginia’s players took the court wearing sweatshirts with the slain players’ names written on the back and their jersey numbers and the words “UVA Strong” written on the front.

Shedrick, who scored 17 points in the 16th-ranked Cavaliers’ 86-79 win, said he struggled to focus in practice on Tuesday and Wednesday and didn’t know if he would be mentally ready to play.

“Coming to Vegas, though, has been a great escape,” he said. “I feel so much better getting out of the Charlottesville area because there’s a lot going on there right now. That’s not mentally healthy for anybody to have that around you all the time.

“I felt a lot better the last two days, and I was focused for the whole game. The last 30 seconds, I started to get a little emotional hearing everybody cheer for us. I went back to thinking about them.”

Armaan Franklin, who scored a career-high 26 points, said he had classes with all three players and saw them often.

“We played for them today,” Franklin said. “We played for the whole Charlottesville community. Just trying to be strong for each other. It’s hard not to think about it, three dead players. Just tried to stay locked in, but know what you’re playing for.”

The Cavaliers canceled their home game against Northern Iowa on Monday, the day after the shootings.

A moment of silence was held before the game, for which roughly 2,000 Cavaliers fans were in the T-Mobile Arena stands. Players put their arms around each other during the national anthem, and several hung their heads.

“It’s not the way it’s supposed to be, it’s not,” Bennett said. “To have that performance — I know it’s just a game — but if it brought some momentary joy to any of those guys, thank goodness for that.”

Christopher Darnell Jones Jr., a student and former Cavaliers football player, is accused of fatally shooting wide receivers Lavel Davis Jr. and Devin Chandler and linebacker D’Sean Perry. The players were on a bus returning from a trip to Washington to see a play.

Running back Mike Hollins was injured and recovering following two surgeries. A fifth student, who is not on the team, was wounded and survived.

Jones faces three three counts of second-degree murder and two counts of malicious wounding, among other charges. A witness told police the victims were targeted.

The football team was scheduled to play No. 23 Coastal Carolina on Saturday, but canceled the game. 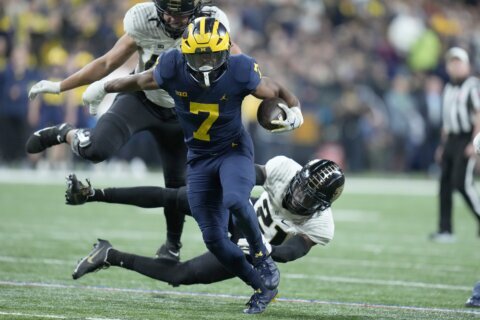