1879 — Princeton beats Harvard 1-0 in a college football game held in New Jersey. The Tigers unveil the concept of using blockers to help advance the ball.

1890 — Minnesota and Wisconsin square off for the first time in what has become the most-played series in college football history. The Gophers beat the Badgers 63-0 in Minneapolis.

1901 — Jim Jeffries knocks out Gus Ruhlin in the sixth round to retain the world heavyweight title in San Francisco.

1952 — An NBA-record 13 players, five Baltimore Bullets and eight Syracuse Nationals, foul out in an overtime game. The Bullets win 97-91. So many Syracuse players fouled out that the officials let some of the players back into the game so the Nationals could keep five men on the court. Whenever those players fouled, Baltimore was given a technical foul shot in addition to the free throws.

1969 — Bill Cappleman of Florida State passes for 508 yards and three touchdowns in a 28-26 loss to Memphis State.

1980 — Dale Earnhardt wins his first NASCAR Winston Cup championship. Earnhardt finishes fifth in the Los Angeles Times 500, the final race of the season, to win the title by 19 points over Cale Yarborough.

2014 — Wisconsin’s Melvin Gordon rushes for 408 yards to break the single-game major college football rushing record before sitting out the final quarter in a 59-24 rout over Nebraska.

1957 — Bill Russell of the Boston Celtics sets an NBA Record with 49 rebounds in a 111-89 victory over the Philadelphia Warriors.

1962 — Wilt Chamberlain scores 73 points, including 45 in the first half, to lead the San Francisco Warriors to a 127-111 victory over the New York Knicks.

1968 — Ron Johnson rushes for 347 yards and scores five touchdowns to lead Michigan to a 34-9 rout of Wisconsin.

1976 — Rick Barry of the San Francisco Warriors ends then the longest NBA free throw streak of 60 in a 110-102 win over the Seattle SuperSonics. Barry scores 33 points, including 9 of 10 from the free-throw line.

1980 — Doug Williams of the Tampa Bay Buccaneers passes for 486 yards and four touchdowns in a 38-30 loss to the Minnesota Vikings.

1982 — The NFL Management Council and the NFL Players’ Association announce settlement of a 57-day player strike.

1993 — Mahmoud Abdul-Rauf of the Denver Nuggets has his consecutive free throw streak end at 81 in an 86-74 loss to San Antonio. Abdul-Rauf’s streak is the second longest in NBA history, trailing only the record 97 established by Minnesota’s Micheal Williams one week earlier.

1996 — Byron Hanspard of Texas Tech becomes the sixth major-college player to run for 2,000 yards in a season, rushing for 257 yards and four touchdowns in the Red Raiders’ 56-21 victory over Southwestern Louisiana.

1996 — Corey Dillon set an NCAA rushing record for a quarter, gaining 222 yards on 16 carries in the first period as No. 15 Washington overwhelmed San Jose State 53-10.

2017 — James Harden scores 23 of his 48 points in the second quarter while Houston puts up 90 points in the first half en route to a 146-116 win over Phoenix. The Rockets make 61 percent of their first-half shots to get the second-most points in a first half in NBA history.

1956 — Syracuse beats Colgate 61-7 behind halfback Jim Brown. Brown sets an NCAA-record for points by an individual player in a single game by scoring six touchdowns and kicking seven extra points for 43 points.

1959 — Syracuse’s Connie Dierking becomes the first player to foul out of a game in the first quarter, as the Nationals beat Cincinnati 121-116 at New York.

1968 — The “Heidi” television special starts on time and cuts off the NBC broadcast of the Oakland-New York Jets game in the final minutes, leaving viewers in the dark and unaware that the Raiders score two touchdowns in the last minute for a 43-32 comeback victory.

1975 — Ken Anderson of the Cincinnati Bengals passes for 447 yards and two touchdowns in a 35-24 victory over the Buffalo Bills.

1990 — David Klingler of Houston throws an NCAA-record 11 touchdown passes as the Cougars trounce Eastern Washington 84-21. Klingler completes 41 of 58 passes for 572 yards and ties the NCAA record for touchdown passes in a season with 47.

1991 — Detroit offensive lineman Mike Utley suffers a spinal injury on the first play of the fourth quarter of a 21-10 victory over the Los Angeles Rams and is left paralyzed from the chest down.

2001 — Lennox Lewis knocks out Hasim Rahman in the fourth round to get back his WBC and IBF heavyweight titles. Rahman’s championship reign of 209 days is the shortest in heavyweight history.

2013 — Jimmie Johnson wins his sixth Sprint Cup championship in eight years. Johnson, who needed only to finish 23rd or better to wrap up the title, finishes ninth.

2013 — Sebastian Vettel wins the U.S. Grand Prix in easy fashion, setting an F1 season record with his eighth straight victory behind another blistering drive that gave the field no chance to catch him.

2014 — Amber Orrange makes a go-ahead jumper with 1:38 left in overtime and the tying 3-pointer with 1.4 seconds remaining in regulation, sending No. 6 Stanford to an 88-86 victory against top-ranked Connecticut to snap the Huskies’ 47-game winning streak. UConn, which went 40-0 last season, loses for the first time since falling to Notre Dame in the 2013 conference tournament.

2014 — Miami Marlins slugger Giancarlo Stanton agrees to terms with the team on a $325 million, 13-year contract. The contract tops the $292 million, 10-year deal Miguel Cabrera agreed to with the Detroit Tigers in March. 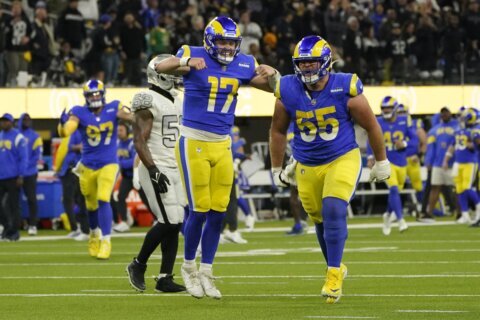